I was reading about the phase relation between the displacement , velocity and acceleration of a particle executing SHM.I understood that all three differ in phase by π/2 radian respectively . In my textbook it is written in addition to the above that

So the difference between $v$ and $a$ is always $\pi/2$ (rather $3\pi/2$). See the plot for $\omega=2\pi$ (black curve is $v$ and red curve is $a$), in going from equilibrium position to extreme, both $v$ and $a$ have opposite signs (blue region) and going from extreme to mean position they have the same sign (green region). Probably this is what you mean when you say 'phase'. 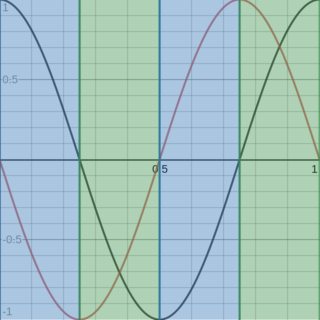 Not the answer you're looking for? Browse other questions tagged harmonic-oscillator oscillators or ask your own question.

0
Phase angle in simple harmonic motion
0
Oscillations concept about velocity
1
Can a periodic motion whose displacement is given by $ x=\sin^2(\omega t)$, be considered as a SHM?
0
While determining phase, is it okay to choose displacement as zero?
1
Velocity in SHM
1
What does the arbitrary constant in cosine equation of displacement in S.H.M say?
0
Can the equation of total maximum amplitude $A_n=\sqrt{A_1^2+A_2^2+2A_1A_2\cos(\Delta\phi)}$ be used though the waves are not in the same line