The quantum-mechanical model of atoms was derived from Heisenberg's uncertainty principle, which states that the position and momentum of a particle cannot both be determined to an arbitrary degree of accuracy. In order to understand the distribution of electrons in an atom, the momentum of an electron in the uncertainty principle is converted into its energy. The principle becomes "we cannot determine both the position of an electron and its energy to an arbitrary degree of accuracy".

Each electron orbital represents a probability distribution map of electrons that fall under it. Theoretically, we can find an electron that falls under a given orbital at any position within the probability distribution map that it specifies. But the problem is, each orbital has a fixed energy value. No matter where in the orbital we find the electron, its energy does not vary. In other words, when we look at an atom and want to determine the position and energy of one of its electrons, we assign it to an orbital. The contradiction is that as soon as the electron is assigned an orbital, we fix its energy, and the only indeterminate variable is its position. So, does electron orbital theory contradict the uncertainty principle, where there are two indeterminate variables?

An orbital is an energy (and angular momentum) eigenstate. When expressed in position basis, it takes on a functional form related to the probability density. This means that if you specify (measure) the energy, the position is no longer well defined. Here’s a graph of the radial distribution of some of the orbitals as calculated by the Schrödinger equation. 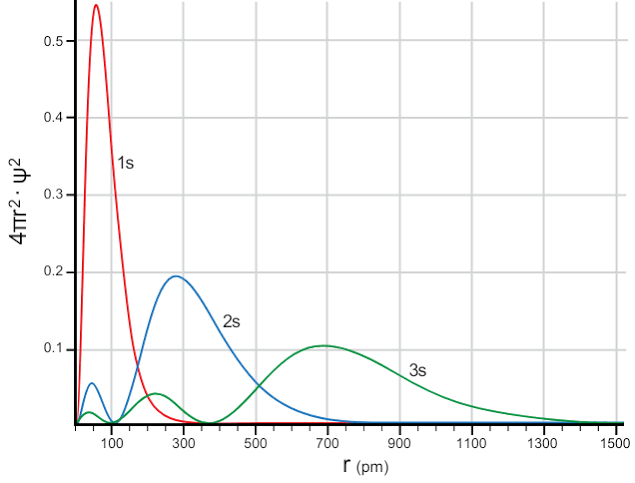 As you can see, specifying a position does not lead to a specific orbital because different orbitals overlap spatially.

So the uncertainty principle still holds.

This question suggests an answer which may help to get rid of some of the naïf folklore about Heisenberg's uncertainty principle (HUP).

In particular, the question

So, does electron orbital theory contradict the uncertainty principle, where there are two indeterminate variables?

HUP does not say that there are always two indeterminate variables (the uncertainties on the two non-commuting operators).

When $\hat A$ and $\hat B$ are the component of position and momentum along a given direction, the commutator is $i\hbar$ and the right hand side of the inequality is equal to $\frac{\hbar}{2}$ independently on the state $\Ket{P}$.

However, when $\hat A$ and $\hat B$ are the component of the position along a given direction, and the Hamiltonian, the right hand side value depends on the state. If $\Ket{P}$ is an energy eigenstate, both $\sigma_H$ and the right hand side are zero. Therefore, it is clear that in such a case one quantity has a well definite value without contradiction with HUP.

This is a good question. For a classical system, the kinetic energy and momentum relate as $$E=\frac{p^2}{2m}$$ Thus, if one knew the energy exactly, then one would also know the magnitude of the momentum exactly.

In quantum mechanics, the energy and momentum are operators that don't commute with each other, which means that an energy eigenstate (e.g. the 1s orbital of the hydrogen atom) is not a momentum eigenstate. For operators that don't commute, all that can be said is that the averages follow the same rules as in classical mechanics, so $$E=\frac{\langle p^2 \rangle}{2m}$$ Because of this, the energy can be well-defined, but the momentum is not.

This is exactly what happens when an electron is in an atomic orbital. Because we are assuming that the electron is in an orbital, this means that it is in an energy eigenstate, so the energy is well-defined. But, this also means that it's not in a momentum eigenstate, so there's some momentum uncertainty. There's also clearly some position uncertainty due to the fact that each orbital has some spatial extent. Multiplying these two uncertainties together results in agreement with the Uncertainty Principle, $$\sigma_x \sigma_p \geq \frac{\hbar}{2}$$

Not the answer you're looking for? Browse other questions tagged quantum-mechanics electrons heisenberg-uncertainty-principle atoms orbitals or ask your own question.

-1
If electron moved in a definite orbit, would that violate Heisenberg uncertainty principle?

6
How does QM allow imaging of individual electron orbitals?
5
Is there any significance of atomic orbitals?
2
Heisenberg uncertainty principle
2
Does path of electron exist from one orbital to another?
0
Does an electron in an orbital have exactly the same energy as the orbital's shell?
0
What's the difference between an orbital and an energy level? Are they the same thing?
0
To which orbital does an excited electron in a hydrogen atom go?
0
The uncertainty principle and the quantization of electron momentum in orbitals - Why are larger energy gaps considered more uncertain?