I am asking a (relatively) 'low-energy' question here, not about things like the Large Hadron Collider...

There are tons of articles everywhere, including such places as Wikipedia and ScienceDirect, that talk at length about probing condensed matter with electrons and neutrons; in addition to EM beams like X-rays...

Why no proton microscope? Or 'camera'? Or low-energy proton beamline?

What do protons offer that electrons and photons don't? Well, mass:

What that means is that protons can travel through large $Z$ materials without undergoing electromagnetic interactions such as bremsstrahlung or pair production (the former goes as $M^{-5}$ at fixed energy).

This makes it possible to use protons to image things built with high $Z$ material, materials like lead, tungsten, uranium, and plutonium. Hence, the proton radiography group at Los Alamos National Laboratory (https://lansce.lanl.gov/facilities/pRad/index.php).

The French Test Object is made of various spheres of (non-fissile) high $Z$ material, and is used for testing. 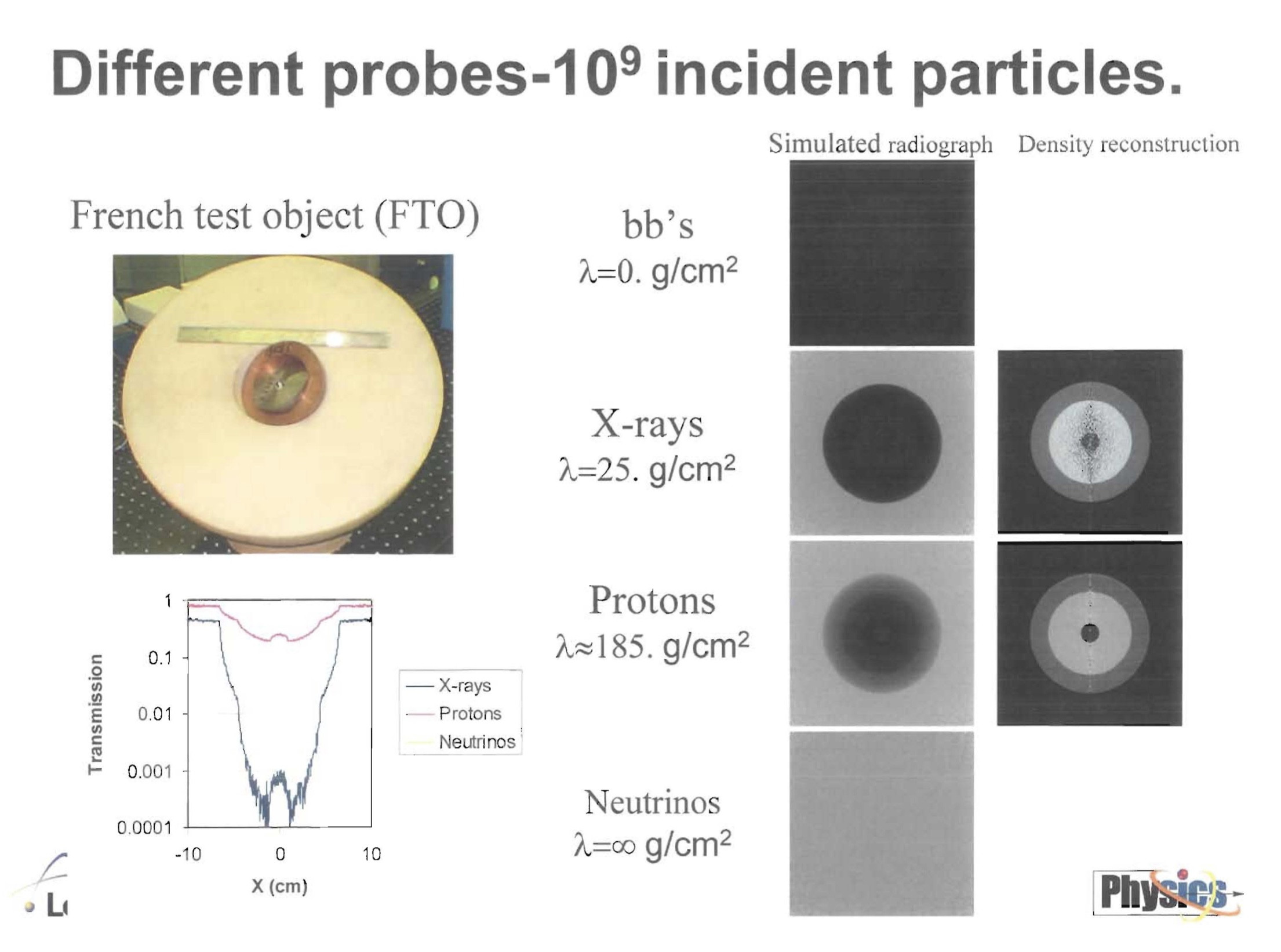 Flash proton radiography also allows the imaging of detonation fronts in various explosive configuration. (All images are from the above link to LANL). 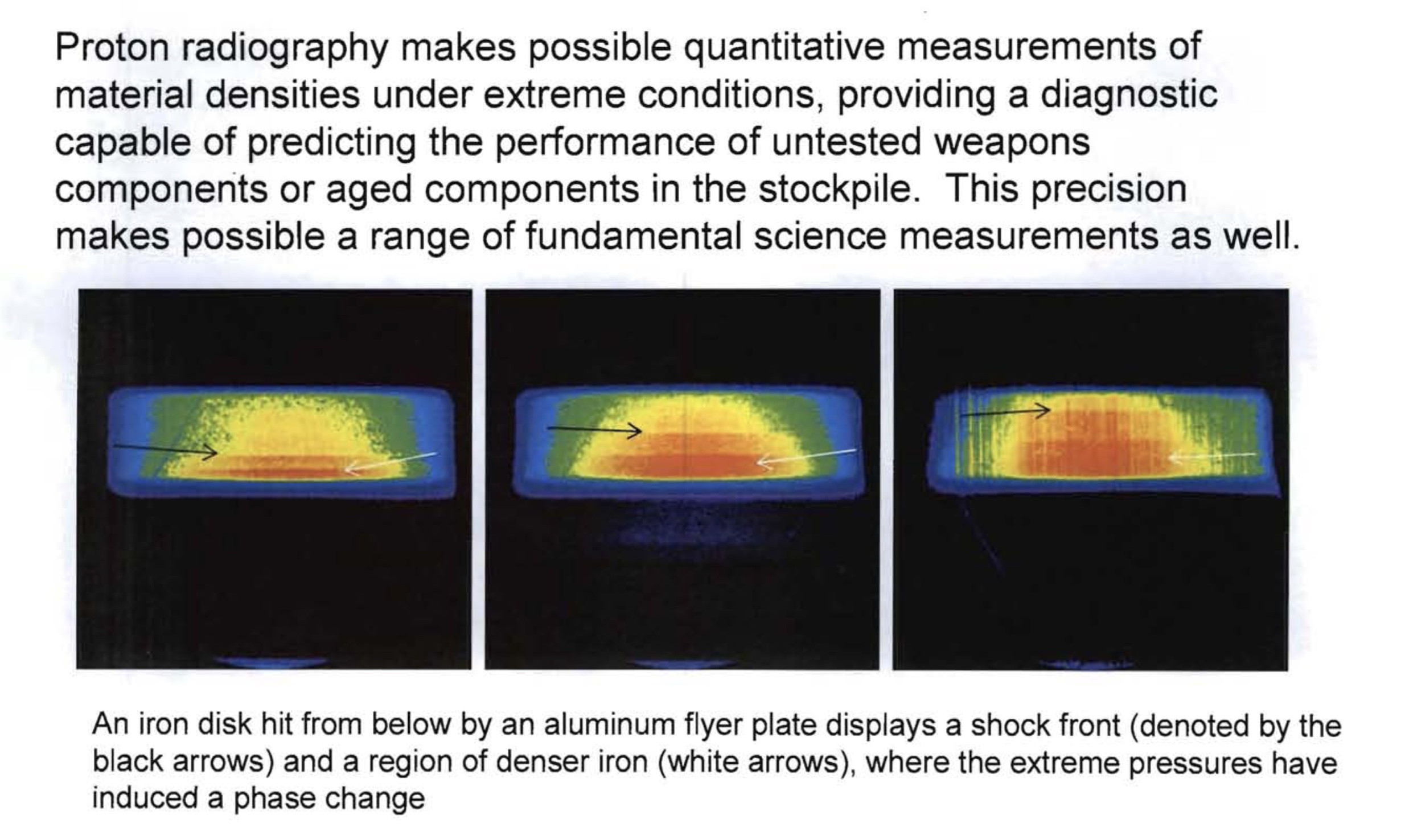 Proton crystallography is not typically done because protons have a very shallow penetration depth compared to electrons, photons/x-rays, or neutrons with the same energy. This means that for a proton to penetrate through the same amount of material as another elementary particle (electrons/photons/neutrons), it needs to be accelerated to much higher energy. But, it is that high energy that makes proton-based techniques induce irreversible damage to materials. This damage can be useful in proton therapy, but is undesirable in studying materials otherwise. As an explicit example, the inelastic mean free path of a 300 eV electron in water is about 2 nanometers, but to achieve the same mean free path for a proton you would need it to be accelerated to over 1,000,000 eV.

Nonetheless, protons are plentiful (compared to neutrons) and don't deposit a lot of energy through electromagnetic radiation, so they have found use in imaging heavy bulk materials like lead as discussed in the other answer by JEB. However, it should be stressed here that to do proton radiography you need to accelerate protons to very high energies (about a gigavolt) so you can't make a benchtop proton imager like you could with electron or x-ray imagers. It's also worth mentioning that protons deposit more kinetic energy in the final length of their travel at the so-called "Bragg peak" (unrelated to crystallography). This behavior can be compared to electrons which deposit much more through electromagnetic radiation at the beginning of their penetration.

However, while proton microscopes are uncommon, there are Helium ion microscopes commercially available that can achieve incredible spatial resolution down to 0.5 nanometers (about 2-3 carbon atoms wide). The reason Helium is used is because it tends not to stick or bond to materials because Helium is an inert noble gas, while protons (a.k.a. ionized Hydrogen) readily bond to most materials and change their physical, chemical, and biological properties. The shallow penetration depth compared to electrons is actually an advantage here, because it gives a lot of surface contrast and better resolution.

Compared to electrons, the higher mass of Helium atoms (or protons for that matter) allows them to be focused to even smaller spot sizes (smaller de Broglie wavelength) with even less penetration (high surface contrast and minimal spread) due to the better momentum transfer to nuclei compared to light electrons. There are a number of other advantages as well (see this paper) such as minimal sample damage, higher contrast without the need of metal coating, and less susceptibility to charging. Practically, the higher mass of Helium atoms also means only electrostatic lenses are needed, which is useful since magnetic lenses are heavier and have larger aberrations.

Zeiss sells such a Helium ion microscope, take a look at the instrument below. 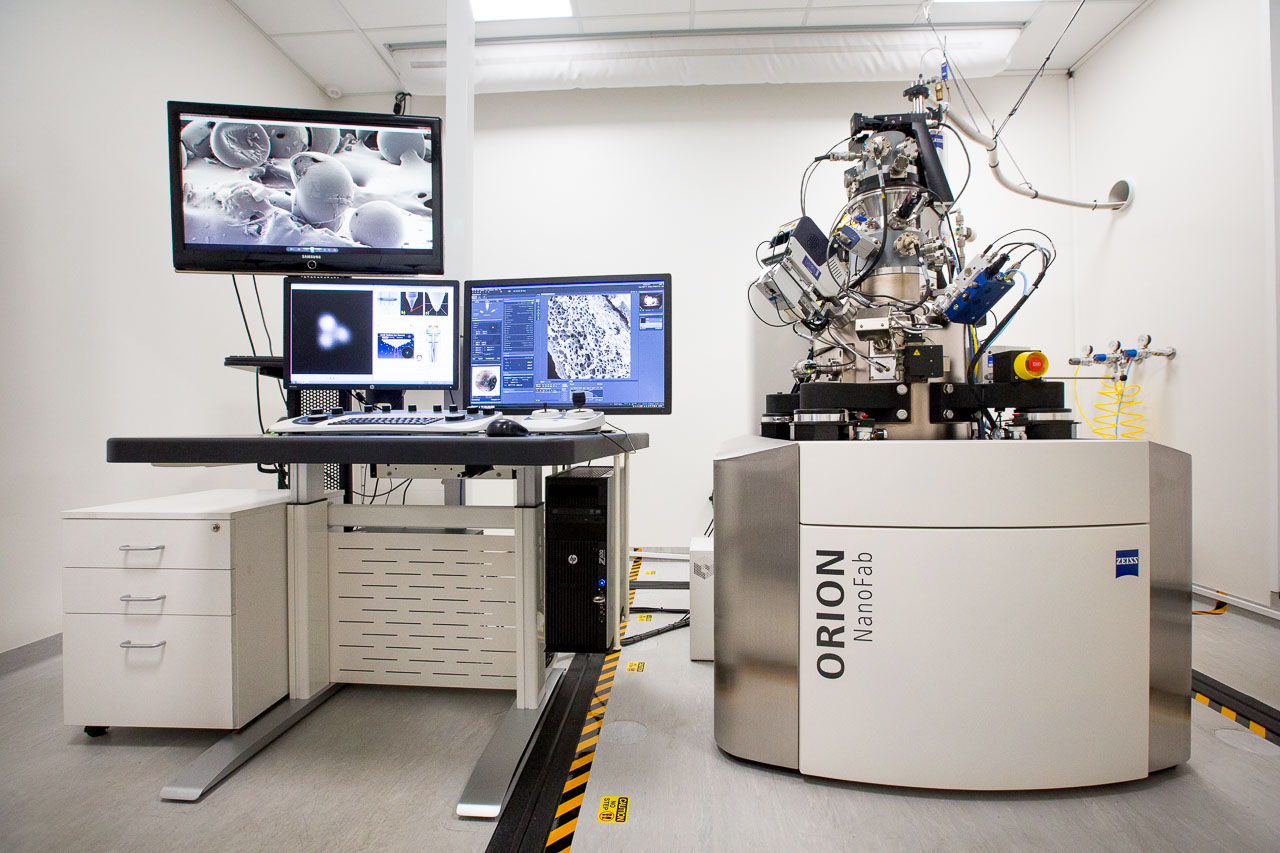 Using a Helium ion microscope, you can take some very nice images of the Arabidopsis thaliana plant taken from this paper as also shown below. 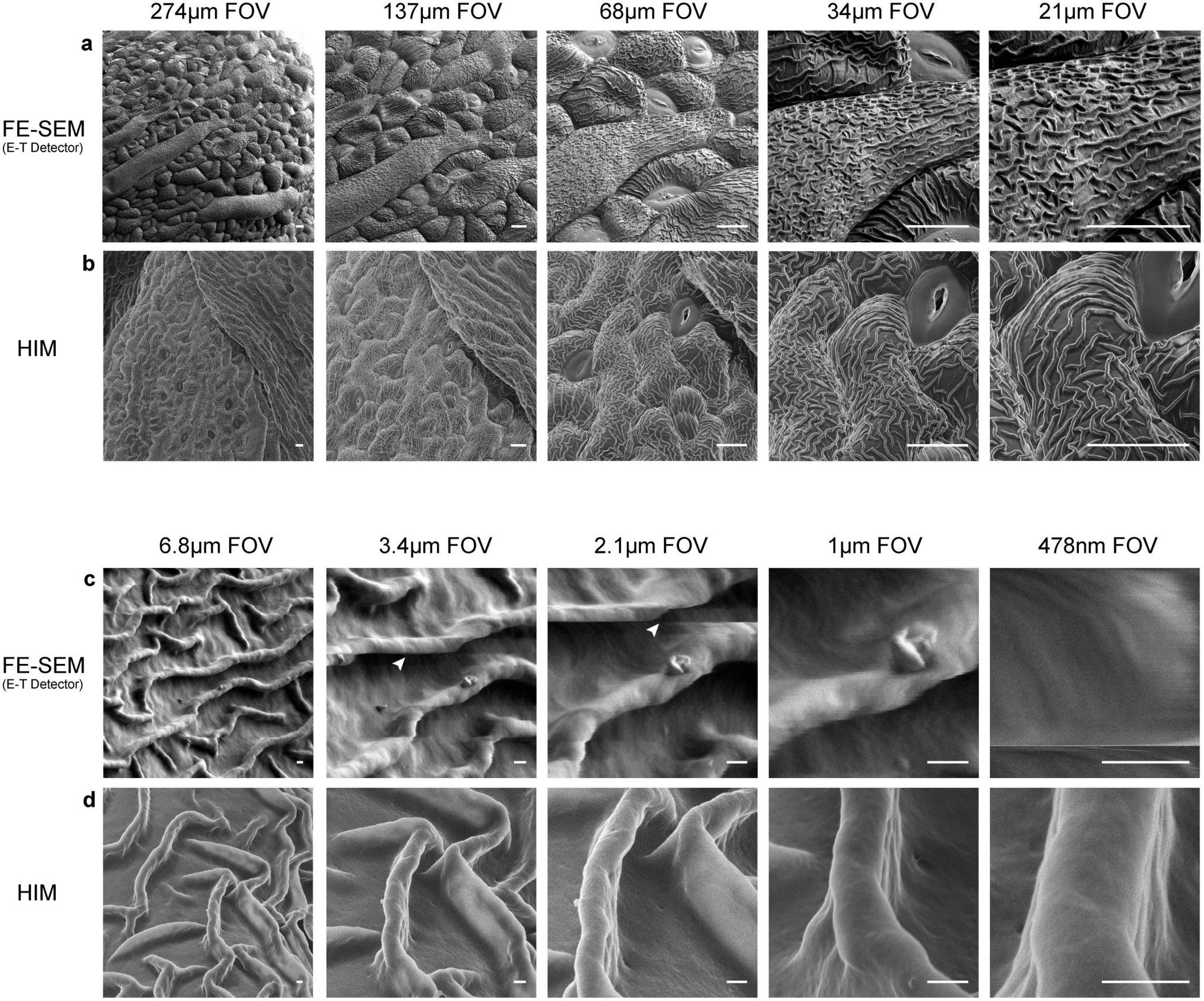 Protons are much heavier than electrons and have a bigger charge radius. That means they have a lower resolution.

Note: As other answers have pointed out, they have other advantages over electrons and photons.

Neutrons are used to capture spin data from charged particles. Because they are neutral, their interaction with the subject matter is for most parts non existent. But they do have spin (that can be coupled). This makes them excellent candidates to measure spin of charged particles.

Not the answer you're looking for? Browse other questions tagged condensed-matter material-science crystals protons microscopy or ask your own question.

1
Why is the crystallography restriction obeyed?
17
Is there a sound theoretical argument against inner-shell induced nuclear chain reactions?
1
What does a subatomic charge actually mean?
5
How does radiation degrade mechanical parts and electronic devices?
0
RHEED (Reflection high-energy electron diffraction) spot size is small why does it can reveal the quality of large size sample
7
Why don't we have proton/neutron microscopes?