Why does an ideal antenna not absorb all incident power?

So, in the optimum case half of the power absorbed by the antenna is immediately re-radiated. Clearly, an antenna which is receiving electromagnetic radiation is also emitting it.

Suppose I have an ideal isotropic radiator radiating $P_x$ into empty space. Now every closed surface integral over the Poynting flux enclosing the radiator should give me the $P_x$. Take radii $r_1 < r_2 < r_3$, all much larger than the wavelength.

Neglecting heat radiation, can anything at $r_1$ detect that radiation was absorbed at $r_2$?

Now I replace this ideal absorber with an ideal antenna. According to the text above, this antenna would re-radiate half of this power in most ideal conditions.

If I place another antenna at $r_1$, this antenna should be able to receive $\frac{P_x}{L_1} + \frac{P_x}{2 L_2}\frac{1}{L_2-L_1}$, where $L_n$ denotes the ideal free space path loss at radius $r_n$. The first term is from the ideal radiator and the second one the re-radiated power from the antenna at $r_2$. This implies that the mere presence of a receiving antenna with a perfect match can indeed be detected.

What is the difference between an ideal antenna and an ideal absorber? Why does an antenna re-radiate half of its power? Why can there be an ideal absorber but we cannot use it to detect signals? Why are we instead relying on something that throws away half of the power?

My vague explanation is that the electric field in the wave excites electrons in the conductor which accelerate. This acceleration not only generates the current/voltage (which is detected by the circuit) but also generates electromagnetic radiation. However, with a black-body, it is certainly possible to have something that absorbes 100% of radiation. (I have to note that the most efficient solar cell 47.1%, i.e. nearly half. Is this the same fundamental limit?)

From a wave propagation perspective, an electromagnetic wave can only be reflected if there is a change of impedance. If we assume the load perfectly matched with the antenna, where is this impedance change that causes half of the wave to be reflected? Is this somehow related with a change from $Z_0=377\Omega$ to the radiation resistance of the antenna? (mathematically this could make sense for a Hertz dipole where the radiation resistance represents a short as compared to $Z_0$ but not so much for a walf-wavelength dipole).

Similarly, assume the antenna is not terminated (open circuit). In this case, only 50% of the incoming power would be reflected by the open circuit?

PS: This question is inspired by https://electronics.stackexchange.com/questions/187681/can-a-radio-transmitter-somehow-detect-the-number-of-receivers-in-its-area, which leaves the actual answer controversial/open.

Any elaborate explanation is much appreciated.

I will try to summarize the classic results from 1, 2, 3. In short, a receiving antenna does not scatter as much power as it absorbs except in a few very special cases such as a very short dipole or a small loop. For these small dipoles, when the incident wave induces the same current distribution as would be seen when the antenna is used and driven as a transmitting one, then the scattered field energy is the same as the absorbed energy when used as a receiver.

In general though the scattered and absorbed fields have no such relationship. To see this note that a receiver antenna cannot just be analyzed as an antenna by itself. In fact, its behavior depends both on its orientation and distance to the transmitter antenna. These can be described by a reciprocal 2-pole network and its corresponding $2\times2$ impedance (admittance) matrix

that can be represented as a "T" (or a "$\Pi$") network. Assume that the transmitting generator has open-circuit $emf$ $V_g$ with internal impedance $Z_g$ and is connected via a transmission line to the antenna ports $2$, while the load impedance is $Z_L$ and it is attached to port $1$.

The $Z_{12}=Z_{21}$ transfer impedance represents the coupling between the antennas through air and its magnitude is proportional to the squared reciprocal distance between the transmitter and receiver antennas and, in practice, it is many orders smaller than either $|Z_{11}|$ or $|Z_{22}|$. The figures below taken from [3] shows the impedance matrix representation and, hence, the Thevenin equivalent. (While both can be used if instead a $T$ we would use a $\Pi$ network then the admittance matrix representation would be more convenient to get the Norton equivalent.)

This result immediately shows that one cannot and should not interpret $P_D$ as scattered power when we use the Thevenin or Norton equivalents to calculate the dissipated power inside the network because they can be *different*. Instead, one may use these equivalent circuits to calculate the power dissipated in the load *only*.

For example, if the receive antenna is open circuited then there is no absorbed power nor internal dissipation, $P_D=0$, and get the completely nonsense result that the antenna does not even scatter. On the other hand, in the open circuit case the Norton equivalent shows a complete reflection from the antenna. When the load of the receive antenna is matched to the driving point impedance then $Z_L = Z_T^{*}$ and we do have $P_D^n=P_D^t$ and it could interpreted for a small dipole as the scattered power, see Collin for details. 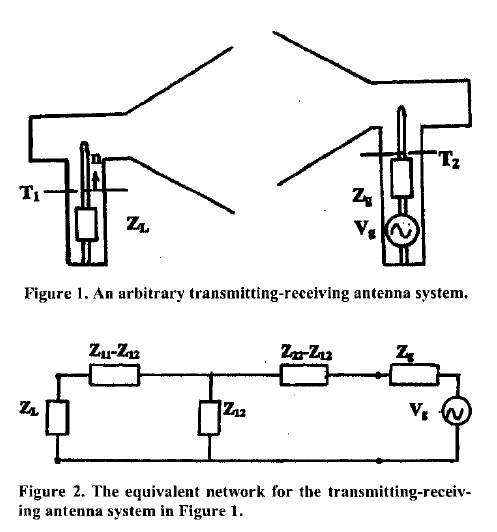 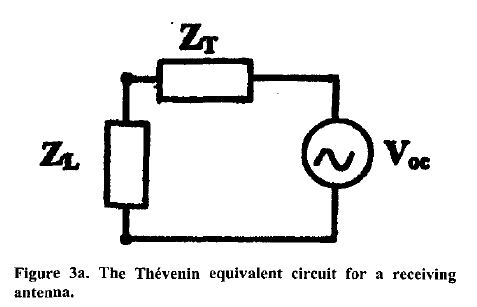 Another approach is that of Love who instead of using a Thevenin (or Norton) equivalent circuit that uses a constant voltage (or current) source synthesizes a constant power source representing the incident power wave directly. This is shown below 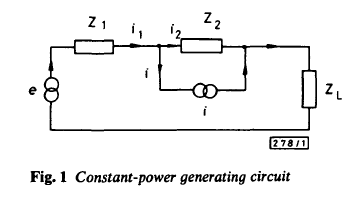 For aperture antennas Love shows that the voltage and current sources of his equivalent circuit depend as in below where $\eta$ is the aperture efficiency. His analysis concentrating on aperture antennas, while not generally valid for arbitrary antennas, removes the apparent contradictions and is in agreement with normal physical (engineering) intuition.

3: Collin: Limitations of the Thevenin and Norton Equivalent Circuits for a Receiving Antenna, IEEE Antennas and Propagation Magazine, Vol. 45, No. 2, April 2003

Not the answer you're looking for? Browse other questions tagged electromagnetism waves electromagnetic-radiation antennas or ask your own question.

2
Equivalent circuit for an arbitrary receiving antenna
2
Normal Modes for Standing Waves in 1-D Acoustic Ducts with Arbitrary (but real) Impedance Jumps
2
Antennas and the electromagnetic field
0
Basic question on Poynting flux and antennae
4
How do antennas work?
0
Exactly what is the cause for the zero reactance seen in the impedance at the center feed point of a resonant half wave dipole?
0
Isn't induced EMF in an antenna dependent on the power of the electromagnetic wave?