How are subatomic particles affected by gravity?

I‘ve been searching for it on many different websites and they all basically say the same thing. The subatomic particles’ mass is so small that other forces (as the weak force, strong force and electromagnetic force) act on them much more effectively, in such a way that particle physicists may completely ignore gravity when attempting to explain a physical phenomenon involving them.

Ok, my question is: Although the gravitational pull may be extremely weak, it still exists. Shouldn’t it account for something, and thus be considered, in some special situations? For example: Let‘s say we could isolate one subatomic particle (vacuum) inside of a high container in such a way that all the other interactions (weak, strong and electromagnetic) could be mitigated to a value lesser than the (tiny) gravitational pull acting upon this subatomic particle. Question: In this situation, would we observe a tendency of this particle to be dragged to the bottom of the container (gravitational drag towards the center of the earth), after a sufficient amount of time?

Ultracold neutrons have velocities of a few to tens of meters per second and can be transported from source to experiment on ballistic trajectories (governed by gravity). (See the PF2 experiment at Institut Laue-Langevin ) 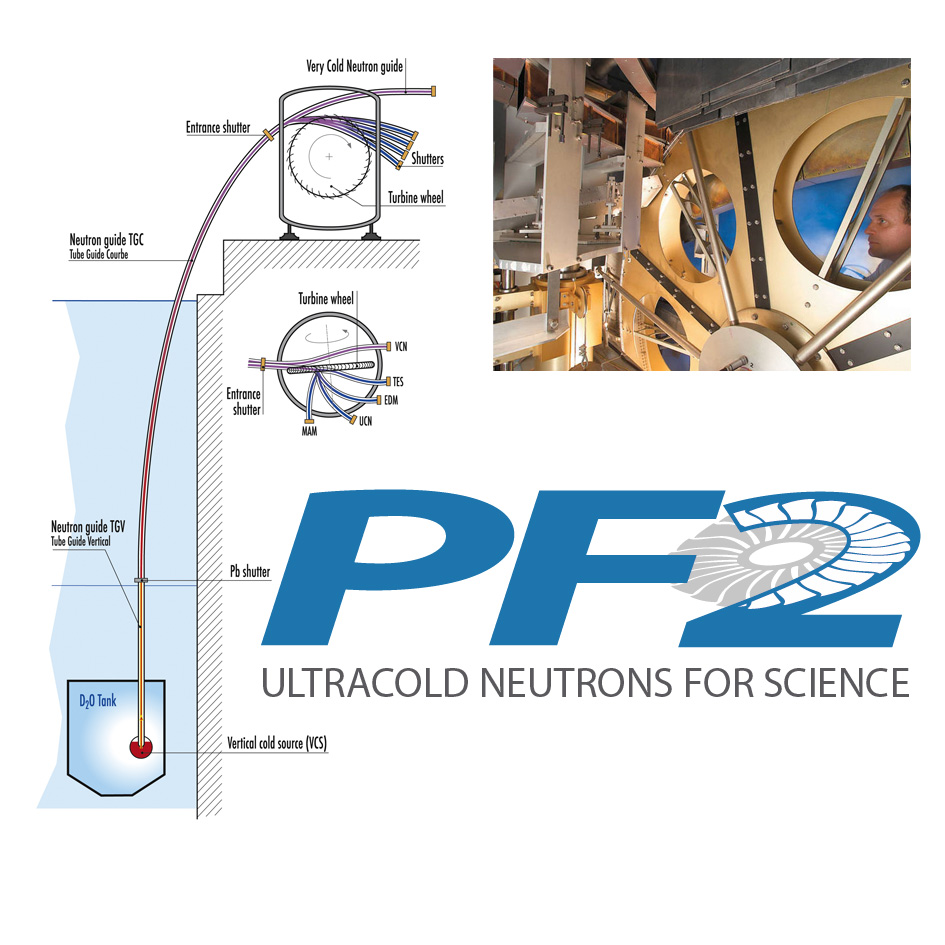 In terms of high energy experiments, say a positron beam scattering from atomic electrons, the gravitational effect would not only be unmeasurable, but they would also be theoretically uninterpretable.

The experimentalists measure a probability for a beam of positrons to scattering at some angle with some energy. Theorists cannot calculate exactly what happens; instead, they do successive approximations using Feynman diagrams.

The simplest diagrams are easy to calculate (even the experimentalist can do it), and it dominates the process: 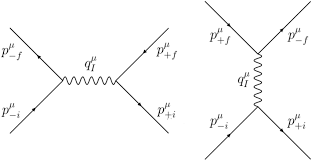 In higher-order diagrams, each pair of vertices includes a factor of

That figure only shows two diagrams. The next level includes all connected diagrams that you can draw.

Enter gravity. Gravity is $10^{36}$ times weaker than the electromagnetic force so that the leading order gravity term is the same strength as the 17-th (plus or minus) order QED term. Note that you need to compute every diagram of that and up to that order, of which there must be $10^{\rm a lot}$.

The most precise calculation ever done, the electron g-factor, involved up to at least fourth-order diagrams, of which there are thousands, and the computations took many researchers years.

So, while one could compute the gravitational contribution to your experiment, it will always be much smaller than electromagnetic terms that you could compute in theory, but simply do not have the resources to do so. In practice, as with the muon magnetic moment, there are also hadronic contributions with uncertainties that are many orders of magnitude larger than the gravity term, so that you cannot even compute them well enough in theory.

The electron, an elementary particle, is a subatomic particle. The LEP accelerator beams were beams of electrons and positrons necessary to be controlled with great accuracy in order to collide and the collisions studied. In this conference report, the necessary corrections to the beams due to earth tide effects that induced a change in gravity is described. Note that the electron/positron beams move in a very good vacuum, similar to your requirement.

Thus the answer is that there exists experimental evidence that subatomic particles are affected by changes in the gravitational field.

The gravitational field has been measured to induce a measurable phase difference in neutron interferometry. See, for example, the COW experiment, originally published by Colella, Overhauser, and Werner in Phys.Rev.Lett. 34 (1975).

If we were able to create a large container, of perfect vacuum, somehow isolated from all external electromagnetic and nuclear forces, and then release a particle into it at the top, then from a classical perspective, the motion of the particle is extremly simple.

It would fall downwards with an acceleration of 9.81 $ms^2$, just as every other mass would. It wouldn't fall any slower, per the definition of the experiment and our understanding of classical mechanics. It would simply accelerate downwards.

Naturally, we can't really do this experiment in real life, at least not in this form, as it is very difficult to prepare perfect vacuums completely isolated from all external forces (and measurement of individual atoms/particles is not well explained by classical mechanics). However, some experiments have come close enough to confirm that atoms fall as expected [1], and it would be weird to think that gravity mysteriously turns off when you break an atom apart into subatomic particles.

But you don't even need to do this experiment to know that atoms are affected by gravity. You can tell by the fact that you are breathing! The earth's atmosphere is made up of a large number of atoms. If they did not respond to gravity, then they would simply fly in straight lines, bounce off the earth, and eventually escape the earth's sphere of influence, never to be seen again. Imagine you threw a large number of perfectly elastic bouncy balls down into a deep pit. If they were unaffected by gravity, they would simply bounce out, and keep going upwards. If they are affected by gravity, then they will bounce upwards, but eventually fall back down again, reaching a height determined by the initial kinetic energy they were given, and the strength of the gravitational field. This is a massive oversimplification, but it is broadly similar to the earth's atmosphere. The fact that molecules in our atmosphere reach heights of hundreds of kilometres before falling back is due to the fact that the force of gravity on an individual atom is very small compared to the forces of collisions with the other molecules. Never the less, they go up, and come back down, same as anything else does

Question: In this situation, would we observe a tendency of this particle to be dragged to the bottom of the container (gravitational drag towards the center of the earth), after a sufficient amount of time?

Absolutely. It would fall just as fast as any other object. There are three factors that distinguish this from quantum calculations:

So when physicists say that gravity can be disregarded for quantum mechanics, what they mean is that the gravitational force within a system is too small to matter (unless you're going for an extremely high level of precision), and outside gravitational forces generally don't have time to act, and even if they do, they just move the center of mass of the system, rather than having a significant effect of what's going on inside the system.

The answer is yes, the particle would be dragged towards the Earth, the point is it would be very slow. For almost all physical calculations on the atomic scale the effects of gravity are treated as if they weren't there because gravity is so much weaker than the other 3 forces, for a comparison see here.

What you're describing is partly impossible. You can't shield from the weak and strong forces, you'd be able to do some weird stuff if you could, like preventing radioactive decay and blowing protons up at will.

But, let's assume we have a setup where all effects other than gravity are close to zero (very, very tricky). What happens? Nobody knows. The most "sensible" answer is that you would see the particle fall just like any other object, or possibly jitter around but on average follow a normal "falling due to gravity" path.

But the simple answer is nobody knows, this is one of the areas where the mismatch between relativity and quantum mechanics become obvious. We know that in some way a group of particles have to fall like a rock does...a rock is just a group of particles after all, but what an individual particle does is less clear.

Not the answer you're looking for? Browse other questions tagged forces particle-physics gravity estimation or ask your own question.

15
Why is there a search for an exchange particle for gravity?
58
Why is gravity such a unique force?
60
How exactly does gravity work?
1
How is the weak force important for the Universe?
0
Is there a 5th fundamental force which may be responsible for the behavior of matter to be wave or a particle?
1
How is pulling on a rope attached to a cart due to electromagentic forces?
1
Can particles smaller than Planck Length be detected?