Thank you all for the explanations, but I think until I fully grok special relativity, Lorentz transformations and relativity of simultaneity, the answers won't make any sense to me. Maybe the question I should be asking is "why do we believe there is no absolute time frame", but that would change this question too much, I believe.

I won't delete this on, but leave it up for interested readers and flag it as a dupe. Maybe the answers here will make more sense to them than to me. Cheers, everyone

I keep reading that FTL means traveling back in time would be possible, but all explanations I've read so far seem to concentrate on when it is we perceive the arrival of light as the observer. Maybe the definition of time travel that people are using is different from the one in Sci-Fi, so maybe my incomprehension comes from there.

Here's what I think as a programmer. Could someone please point out in layman terms what I'm misunderstanding?

I assume, were the universe a computer, it'd have a global state that is constantly changing.

In order to perceive this state and its changes, we have evolved with utensils to do so. Our perception is always of something that happened in the past because the fastest thing to transfer that information travels at the speed of light. There is always a lag and the greater the distance from an event, the greater the lag.

An actor does an action at normal speed, instantaneously travels to a location where the information of that action will take (let's say) max 10 seconds to arrive, and sees itself doing an action from 10 seconds ago. There was no time travel but simply a lag of information transfer.

Destination will get the information 3 times, but the even will always lie in the past. Even if destination mounted a rescue mission and sent help instantaneously to earth, the cataclysm would still have already happened. The global state had already changed.

Your first mistake is here:

I assume, were the universe a computer, it'd have a global state that is constantly changing.

There is no such thing as "the universe". Instead there is a thing called spacetime, which is the collection of all events that ever happen. The Lincoln assassination is an event. The (future) explosion of the sun is an event. Et cetera.

When you talk about "the universe (now)", what you mean, presumably, is the subset of those events that are happening "now". But the main lesson of relativity is that different observers will disagree about which events are happening "now" (and no, this has nothing to do with how long it takes information to travel). I brew a pot of coffee. That's an event. A guy living near Alpha Centauri brews a pot of coffee. That's another event. I say those events happened at the same time and are therefore part of the same universe. The guy on Alpha Centauri says he brewed his coffee first. Some other guy says I brewed mine first. Are those two events part of the same universe? According to me, yes. According to those guys, no. According to a more objective observer, the question is ill-posed.

So there is no such thing as the universe at a given moment, which nips your whole argument in the bud. This might surprise you if you've heard people talk about things like "the age of the universe". That's a concept that makes rigorous sense only in the context of very abstract models that ignore many things that are in fact sometimes best ignored, but can't be ignored in your scenario.

What you do not seem to appreciate is called the relativity of simultaneity. It means that two people who are moving with respect to each other disagree about which events are simultaneous.

An actor does an action at normal speed, instantaneously travels to a location where the information of that action will take (let's say) max 10 seconds to arrive, and sees itself doing an action from 10 seconds ago. There was no time travel but simply a lag of information transfer.

Now, suppose that there is an actress who is moving away at 0.6 c and the actor almost hits her immediately after he jumps to $(0,10)$. She can avoid the collision by also instantaneously jumping, but because she is moving what is simultaneous for her is different than what is simultaneous for the actor. When she jumps instantaneously back she arrives at $(-6,0)$ and collides with the actor 6 s before he jumps, potentially preventing him from jumping in the first place.

Even if destination mounted a rescue mission and sent help instantaneously to earth, the cataclysm would still have already happened.

Welcome to Physics Stack Exchange. Are you familiar with the principles of Albert Einstein's Special Theory of Relativity? I honestly don't fully understand the relationship between FTL travel and time travel myself, but special relativity is the key to what's going on. In simplest terms, special relativity postulates that an observer will measure light to travel at the same speed (299,792,458 metres per second) no matter how fast the observer themselves is travelling. This sounds strange, but it has been borne out as true by every credible experiment performed to date.

This postulate has very important consequences, among them being that facts about time and distance can vary depending on the manner in which an observer is moving. For example, two events which I observe as occurring simultaneously may be observed as occurring at different times by a person in a spaceship travelling very fast relative to me. Neither of us is experiencing an illusion; the order of events actually changes depending on what reference frame you adopt.

When one considers cases of FTL travel (which special relativity forbids under normal circumstances), one sees that any object which is travelling faster than the speed of light in one reference frame is travelling back in time in another reference frame. Let me know if this makes any sense. You'll probably want to do your own research on this, it's very fascinating. :)

I think that a few diagrams will make this a lot easier to explain, so here is an answer to add to those already present.

We will consider some spacetime diagrams. A spacetime diagram is a diagram showing the layout of various events and the movements between them, with time on the vertical axis and spatial distance on the horizontal axis. But it is important to keep in mind that spacetime is not quite like a pin-board to which events are pinned; it is a bit more subtle than that. Think of it as our name for the idea that we can map out positions and times of events using the temporal and spacial measurements made by any given set of clocks and rulers. Here is a diagram showing the result of such a set of measurements for some particular set of events: 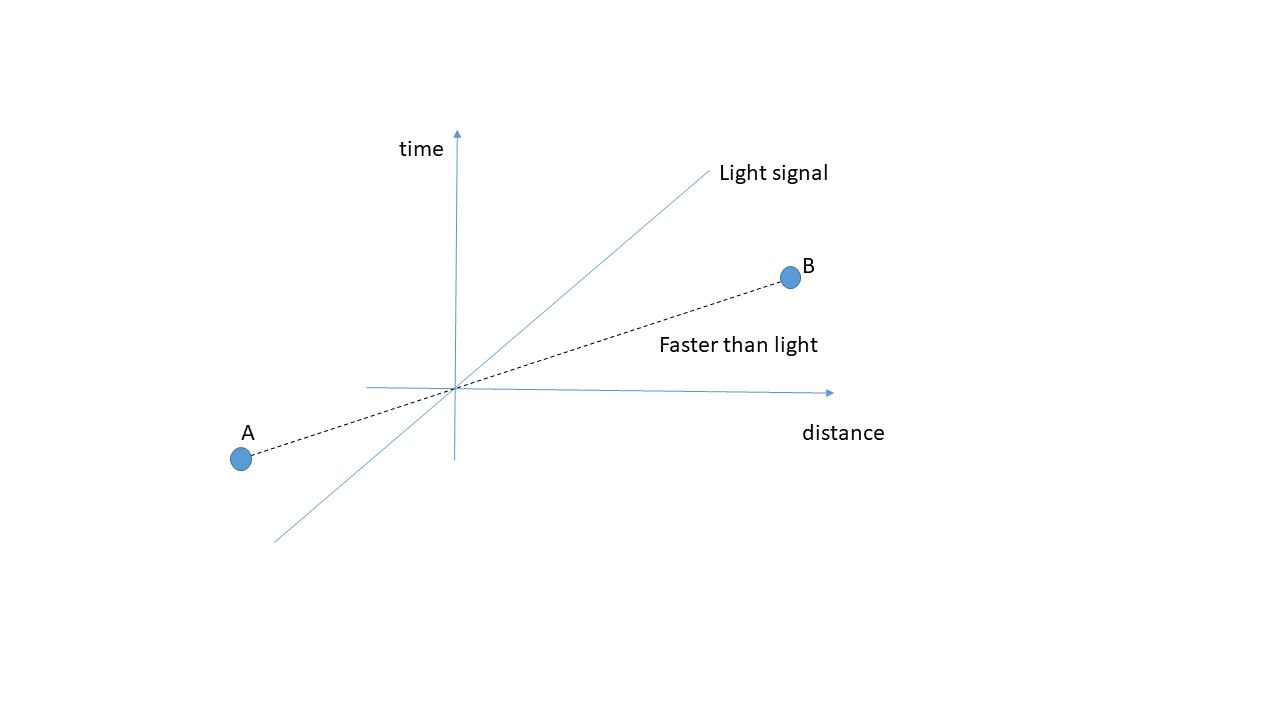 The motion here is in one spatial dimension (say, $x$) so we don't need to show $y$ and $z$. The line labeled "light signal" shows a pulse of light zooming from left to right. The dashed line shows something that started at $A$ and went to $B$ faster than light (you can see this because it took less time to get there than light would have taken). N.B. the diagram is flat: try to ignore any impression of depth that the layout of the lines may give; that it is an optical illusion.

Now we proceed to the next diagram. In order to construct it we will require the mathematics of special relativity. You will have to trust me if you are not already familiar with the subject. We use the Lorentz transformation to discover how these same events would be measured in another frame of reference. To be specific, consider a frame moving from left to right, at some perfectly allowed less-than-light speed. According to relativity, there is such a frame for which events $A$ and $B$ would be simultaneous, and another frame, moving a little faster (but still less than light speed), in which $B$ will happen before $A$. This takes some getting used to, but it is not too bizarre. It just means that if we plot the same set of events, with their spacial location and timing worked out in the new frame, then the diagram will look like this: 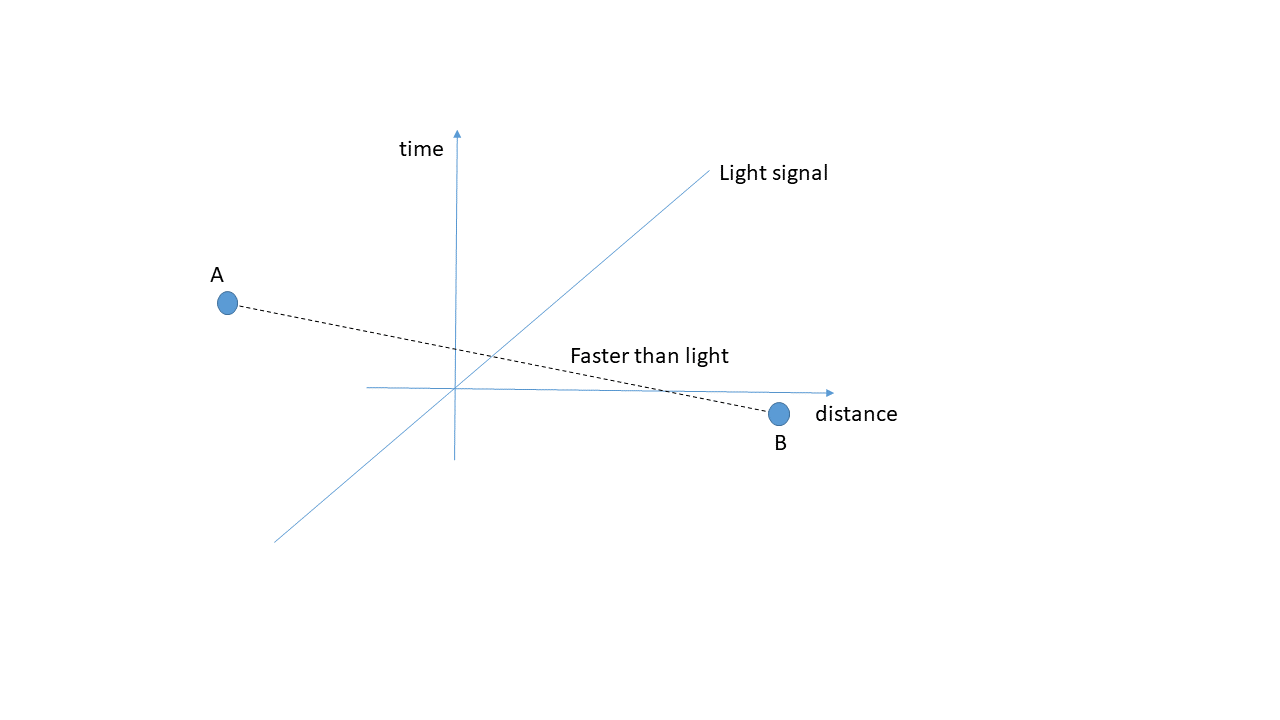 This diagram gives a hint that something odd must be going on for anything that moved from $A$ to $B$, because $B$ is happening before $A$, but since these events are not at the same place we don't get anything too paradoxical yet. The argument now continues by supposing that the person or thing which arrived at $B$ now travels back towards the location of $A$, and they travel faster than light again. Here is the diagram with this return journey added: 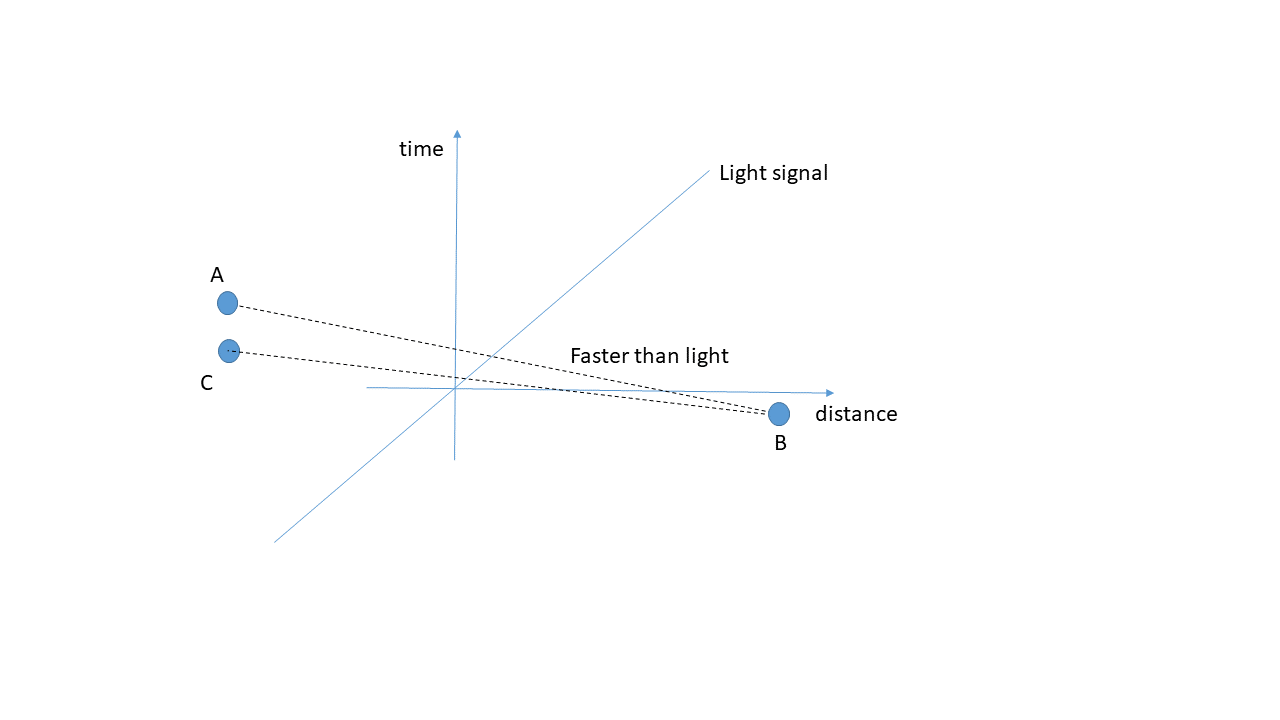 Now we have that someone or something born at $A$ then went off to $B$ and came back to $C$ where they were present before their own birth. So we enter into all the famous causality paradoxes and we conclude that the whole scenario looks highly implausible, and indeed if the universe makes sense then this sort of thing cannot be happening in it.

Not the answer you're looking for? Browse other questions tagged special-relativity faster-than-light causality time-travel or ask your own question.

7
Does superluminal travel imply travelling back in time?
65
How does faster than light travel violate causality?
0
Why would an FTL-drive imply time travel? (other answers and questions unsatisfactory)
1
Why does FTL imply that BACKWARDS time travel is possible? - Very Detailed!

2
Huggins Displacement Theory and Retrocausality
0
Causality (time travel) question
1
Why is a relativistic observer required to show that FTL communication breaks causality?
0
How does time travel work through superluminal travel, as mentioned in Stephen Hawking's "A brief history of time"?