Anti-laser: How sure we are that energy is transported?

Is energy transported (by light)? -- (I did believed in this answer until now) or energy is already 'in site' (vacuum) just expecting to be excited by the photons?

This news insinuated the doubt anti-laser(1)

The antilaser does the reverse: Two perfect beams of laser light go in, and are completely absorbed.

If vacuum is able to absorb energy then it can do the reverse, and supply energy. We are already prepared to accept that vacuum has energy.

I am inclined to accept that energy do not travel at all. What is travelling is the excitation of vacuum, and we call this: photons. It may appear a question of semantics, but I think that the explicit reconaissance of this notion can be helpful.

(1) The two rays entering the slab are in phase opposition when they met, and cancel. The nature of cancelation was obscure to me, until now.

I googled this: "where goes the energy in a destructive interference" and followed past answers to this question. Someone answered "into the surrounding environment." We are in minority;) Most of the times they said that the total extinguishing is impossible. This anti-laser experiment shows that energy is destroyed.

We see the same effect with sound cancelation , with boat wake (trailing waves) cancelation (by double/triple hull or when they sail in formation), and now with light. 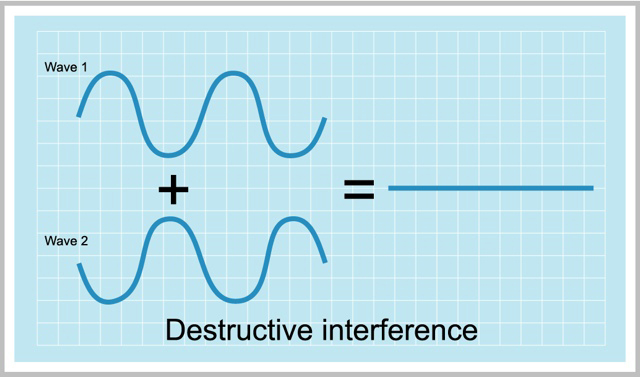 image from astro-canada.ca
What is amazing is that this fact is inside the theory since the begining, quoting from there:

In 1801, the British physicist Thomas Young demonstrated that light propagates as waves, like waves on the surface of water. Young understood that when two light waves meet, they interact with each other. Scientists call this “interference”. In the opposite scenario, where the crests of one wave are aligned with the troughs of another, they cancel each other out and the light disappears. This is destructive interference.

As anna says in her answer the actual theorethical framework does not understand a vanishing of energy. The question remains open: What happens to energy when 'light disappears' or 'light cancels' or 'destructive interference'?

We regularly measure the energy stored in electric and magnetic fields. Think capacitors and inductors.

We do engineering with energy stored that way.

The fields have energy, and the propagation of light generated fields far from the source.

So energy was transported. QED.

So where does the energy go in the experiment you linked? Read the article:

When the alignment was right, the light waves canceled each other out. The silicon absorbed the light and converted it to another form of energy, like heat or electrical current.

The two beams are being used to drive a single process both directions through it's transition (which will require the same energy input and have the same cross-section by time-reversal symmetry). Presumably these processes couple to the bulk in some way and each dissipates leaks energy through that coupling.

The paper itself is available as http://www.eng.yale.edu/caolab/papers/Sci11b.pdf

From the experiment with the silicon wafer we get the information that heat was generated. When two coherent beams of photons interfered destructively, heat appeared.

What is heat in this particular case? Heat results when a bunch of infrared incoherent photons interact with matter. The destructive interference of the waves of photons became a burst of incoherent infrared photons heating the wafer..

The same will happen in vacuum. The disappearance of the laser coherence will be accompanied by a burst of infrared photons.

You can think of it as the particle nature of light dominating, with multiple photons scatterings on virtual electron loops from each other. The energy would be all there in the infrared burst. Because the momenta of the two beams are in the same x direction, they can only scatter within the Heisenberg uncertainty allowance in space, and thus turn into photons of very low energy.

This could be tested experimentally in vacuum , by detecting the infrared from the destructive interference. I think it is the correct view because the claim that "energy disappears" is not viable within our local physics framework . If the experiment shows no infrared correlated with the interference, then one would have proof of extra dimensions into which the energy was dissipated.

The higher order loops I have recourse to in my argument above in vacuum , have small probability: photon photon scattering is higher order with 4 1/137 vertices. I think that the answer lies within the formalism that Lubos develops in his blog after this question was asked, of how the classical wave emerges from the quantum mechanical.

I believe now that the answer for the vacuum is that: completely overlapping out of phase opposite direction beams will go their way minimally affecting each other with higher order processes, and will appear at their ends with their energy diminished a bit by the higher order processes. In vacuum there is no material for the classical electromagnetic wave to collectively interact and it is just photons running with the speed of light.

I'm just a simple normal working person, but I like to dabble into physics. Below is a representation of how I have always seen it happening.

As I see it taking it to the water cancelling eachother out and assuming light has the same behaviour properties as water waves.

When water waves of the same wavelength but exact opposite from eachother it seems as if the energy is lost. This isn't possible, what happens is that all energy is spent by friction.

Wave a has the same speed, mass and height as wave b. They meet at the exact same apex, they put the exact same amount of force against eachother, friction results, neither one budgets because they are exactly the same, and all energy gets spent into friction/heat untill all energy is lost into heat.

Now what is interesting is what happens to transformed light in a vacuum where the above scenario happens, if it transforms into heat, where there are no molecules to exite, the solution is what I would pose is that the resulting frictions result in a different infrared single wave or something similar.

Not the answer you're looking for? Browse other questions tagged energy photons vacuum or ask your own question.

120
What happens to the energy when waves perfectly cancel each other?
13
Can there be black light? I mean is it possible to devise a machine that outputs darkness?
33
Is energy really conserved?
11
Does vacuum (empty space) exist?
22
Energy conservation and interference
9
Can we transport energy over infinite distances through vacuum using light?
6
Recently publicized experiment on destructive interference between two laser beams
1
Time reversed laser

120
What happens to the energy when waves perfectly cancel each other?
5
Do individual rays of light lose energy via the inverse square law?
0
Can more than one photon be in the same space as another photon?
2
Is double slit interference due to EM/de Broglie waves? And how does this relate to quantum mechanical waves?
0
What is Cancelled out When EM Waves Interfere
0
If two sinusoidal waves that are out of phase and moving in same direction interferes then how will energy be distributed?