Why do we say electromagnetic waves are self-propagating if they follow an inverse square law?

Electromagnetic waves are frequently described as "self-propagating", implying a mode of propagation distinct from that of electrostatic fields; but as I understand things, both have strength proportional to the inverse square of the distance from their source. Let me lay out what one ignorant of wave propagation and ignoring the magnetic field expects to see from a moving charge:

Edit Rephrased the below because I forgot that I was dealing with inverses.

In both situations (2) and (3) the electric field where I stand is the sum of a constant and a periodic function (in case (3) two periodic functions along perpendicular axes), purely as a result of the oscillation of the source charge--no magnetic or special "propagation" effects needed. Obviously I have neglected the finitude of the speed of light in these calculations, which would introduce a tiny bit of distortion.

The periodic component is something like the multiplicative inverse of a squared sine wave, shifted so as to stay finite; some fancy trig likely makes it sinusoidal, since it's pretty dang close. Here are graphs of, respectively, the transverse and longitudinal components of (3), using r=1, P=1, and A=0.1: 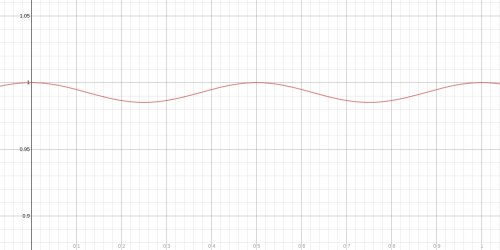 Is it the case that the electromagnetic wave produced by Maxwell's equations in (2) and (3) will lose amplitude at precisely the same rate as this "inverse wave" that derives trivially from the inverse square law and the charge's motion? How, then, do we consider the wave "self-propagating" if it has no special powers to resist decay and acts just like the rest of the electric field?

Related desired elaboration: Apparently the Maxwellian wave will have the same frequency as the inverse wave, so how/why do their phases/amplitudes differ? And where do we get the energy for this extra wave?

The description of EM waves as self-propagating is misleading. There's no causal connection between changing/curved electric and curved/changing magnetic fields: Maxwell's equations simply state that whenever you detect a changing electric field in empty space, there's also a curved magnetic field at the same spacetime point, and vice-versa; they have the common sources: charges and currents.

This fact is nicely summarized in the Jefimenko's equations, which reformulate EM fields (and potentials) as functions of charges and currents at retarded times, with all the fields and potentials being completely independent from each other.

In the case of light, it is easy to see because the measured light intensity is directly proportional to the detector's area. Integrating over the entire $4 \pi r^2$ spherical area, you will get the same constant for all $r$. The inverse $r^2$ intensity fall-off is strictly due to the geometric spreading out of the beam and has nothing to do with the wave nature of light.

where for a spherically symmetric charge distribution, $A$ is the same $4 \pi r^2$ area that light spreads its energy into.

In all three cases the field intensity falls-off by inverse $r^2$, because the field is spreading to an area that increases as $r^2$.

If you were able to focus a beam of light so it never spread out, and a laser comes pretty close, the intensity would stay the same with distance.

Electromagnetic waves are frequently described as "self-propagating", implying a mode of propagation distinct from that of electrostatic fields; but as I understand things, both have strength proportional to the inverse square of the distance from their source.

Not the answer you're looking for? Browse other questions tagged electromagnetic-radiation maxwell-equations or ask your own question.