Finding the acceleration of a cart rolling on a table

The cart is rolls frictionless on the table. It has a mass of $1 kg$. Attached to it are 2 strings, that go through two frictionless sheaves. The weights have masses as in the picture.

a) How large is the acceleration of the cart?

b) How large is the tension in the strings?

c) We replace the cart with a box that also has a mass of $1 kg$, it then accelerates with $1.5m/s^2$, find the friction force between the table and the box."

I tried doing this one, and got every single answer wrong, even though I thought I knew how to do it. This is how I did it:

c) This one I just have no idea how to do. 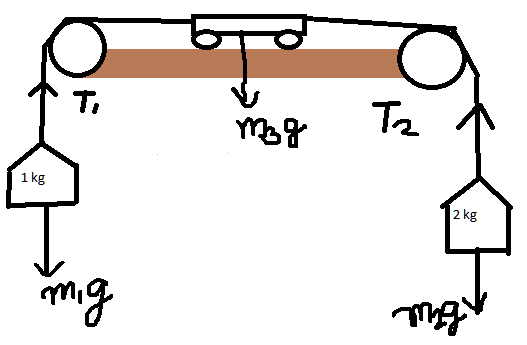 Not the answer you're looking for? Browse other questions tagged homework-and-exercises newtonian-mechanics forces classical-mechanics or ask your own question.