Size of the Observable Universe [duplicate]

Ask Question
Asked 8 years, 10 months ago
Active 3 years, 9 months ago
Viewed 5k times
3
$\begingroup$
This question already has answers here:
How can a quasar be 29 billion light-years away from Earth if Big Bang happened only 13.8 billion years ago? [duplicate] (2 answers)
Closed 8 years ago.

I wanted to know what the observable universe is so I was thinking and I thought, it must be age of the universe times 2.

Well I was wrong. I found on one website that it is 46B LY across in each direction. How does this make sense?

I get how the universe has expanded since then, but we should only be able to see light that is 13.7 billion LY old. Does this mean that the Universe is expanding faster than the speed of light? Or light from other objects is travelling to us faster than speed of light?

Therefore, it is convenient to initially visualize the problem in a framework that makes it easier to understand the involved quantities and the concrete question.

In the 3+1 formalism of General Relativity, spacetime is described as a foliation of spatial, i.e. 3-dimensional, hypersurfaces along the time-axis. In the figure, each slice $\Sigma_t$ represents 3-dimensional space at a given time $t$. 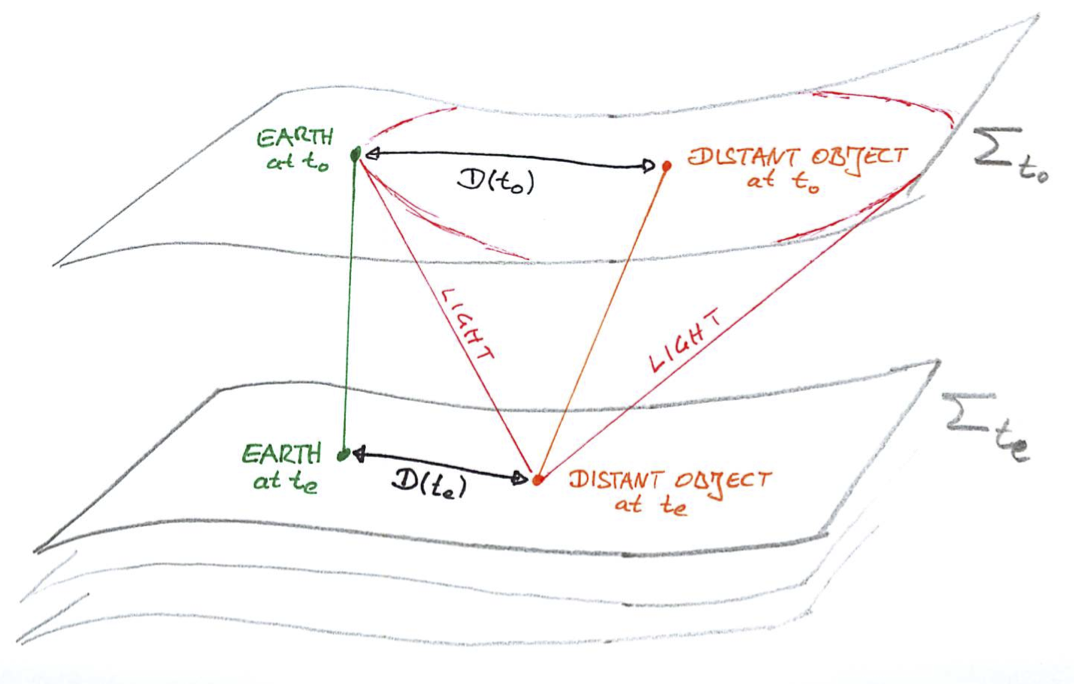 Looking into the past

Since light is locally always traveling with the speed of light, $\mathrm{c}$, on large length scales it becomes important that light that reaches the observer on Earth at a time $t_0$ ("today") has been emitted at its origin at a time $t_e:<t_0$, i.e. earlier than $t_0$.

Expansion of the universe

Experimentally, by measuring the speed of distant objects relative to us and by measuring their distance, one finds that objects which are farther away move away from us with a greater velocity. This is called Hubble’s Law.

$\displaystyle v:\equiv\frac{dD}{dt}$ is the velocity of the object relative to us. $D$ is the proper distance to the object, which is the distance within one spatial slice at a given time (as seen in the figure). And $H_0$, for historical reasons, is called Hubble constant. But, actually, $H(t)$ is a function of time:

one finds, that the Hubble parameter $H(t)$ is actually the relative rate of expansion at time $t$:

Does this mean that the Universe is expanding faster than the speed of light?

But nothing prevents the universe from expanding more rapidly than the speed of light, i.e. prevent the scale factor $R(t)$ from growing.

Not entirely accurate, but for demonstration, one can visualize a balloon with coins glued to its surface. As you pump the balloon up, the proper distance between the coins grows, but locally the size of the coins stays the same.

Age of the universe

Size of the observable universe

We can only observe the universe by looking at particles, e.g. photons, i.e. light, that reaches us. Since locally nothing can travel faster than the speed of light, the distance that light could have travelled within the age of the universe, $t_0$, determines the size of the observable universe.

The distance to the particle horizon, $r_p$, is the distance of an object that has emitted particles (light), which reach us today, and were emitted at $t=0$, i.e. one age of the universe ago.

How to calculate the proper size of the universe

This quantity refers to the distance to the particle horizon, $r_p$, i.e. to the radius of the observable universe. The diameter would be twice as large.

This can be calculated similarly to calculating the age of the universe as shown above.

Size of the rest of the universe

Since the particle horizon represents the limit from where any information can have reached us, we, in principle, cannot tell what is behind that horizon. Therefore, one cannot know the actual size of the rest of the universe. One cannot even know for sure whether there exists a rest of the universe---but it is a convenient assumption.

But models of the Inflationary Expansion of the universe of an early age suggest that the actual universe is considerably larger than the observable universe.

These models are strong in explaining structure formation of the universe, i.e. how and on which length scales clusters of galaxies etc. could have formed, despite the universe being homogeneous on larger scales. They also solve the cosmological fine-tuning problem, or flatness problem:

The universe appears flat as far as we can see (i.e. not geometrically curved, i.e. the sum of angles in a triangle is 180 degrees) on large observable scales, despite the fact that it would be more probable that the universe is curved.

The models of inflation solve this problem by suggesting that the actual universe could actually be curved if it would be large enough: Then, the observable part of the universe would be sufficiently small to appear flat. Like you can describe Earth’s surface as being locally flat even though Earth is a sphere.

But from this analogy one can see that, if these inflationary models are correct, the rest of the universe has to be significantly larger than the observable universe.

Not the answer you're looking for? Browse other questions tagged cosmology universe space-expansion faster-than-light observable-universe or ask your own question.

16
How can a quasar be 29 billion light-years away from Earth if Big Bang happened only 13.8 billion years ago?
5
Superluminal expansion of the early universe how is this possible?
3
What is the average mass of galaxies according to Hubble Deep and Ultra Deep field observations?
-3
Infinite Space && Infinite Energy?
0
My calculation of the radius of the visible universe: where am I going wrong?