We often discuss mass-density, charge-density, and other such functions: $\rho(x,y)$ for ultra-thin plates and $\rho(x,y,z)$ for 3-d objects. The units for the output of these functions say mass or charge/unit volume like $\frac{kg}{m^3}$ or $\frac{C}{m^3}$. I cannot comprehend a density at a single point.

I suspect that when we say mass per unit volume "at a point", we mean the mass contained in the volume immediately around the point. Here, we say "immediately around" in a calculus sense so that the volume is approaching zero. This way the set of all points together is still the full object.

Is this correct? Or have I missed the mark?

The region $R$ can be arbitrarily small, so your intuition is on the right track. If we take $R$ to be a point, then the mass $M(R)$ is zero, no matter how large the mass density may be (as long as it's finite).

Substance (that makes up the mass) is discrete. We have molecules, atoms, smaller particles, etc, ...

There are hints that the space itself is discrete, too (see about the Planck length), but we don't know for sure.

Then again, sometimes (almost always, in fact) it is useful to approximate the substance as smooth and homogenous on small enough scales and use the whole calculus aparatus we have available that uses real numbers.

Basically, you are correct. The mass contained in a point (when we speak of continuous materials) is zero.
However, we can indeed take a small amount of length, area, or volume, mathematically described as $dx$, $dA$, or $dV$ approaching zero. These are called length-, area-, or volume elements. To find the entire mass one has to sum up all the products of all infinitely small mass densities with the length, area, or volume elements at all points in the mass in the 1-, 2-, or 3d case. This summation becomes an integral of the products of the densities $\rho$ with the three different elements (assuming $\rho$ is independent of the position in $x$, $A$, or $V$):

for a mass on a line,

for a mass on a surface, and

for a mass in a volume.

Mass density at a point is defined two ways:

Understanding how and when these two definitions are the same thing requires some measure theory -- at which time you learn how they are not the same thing. 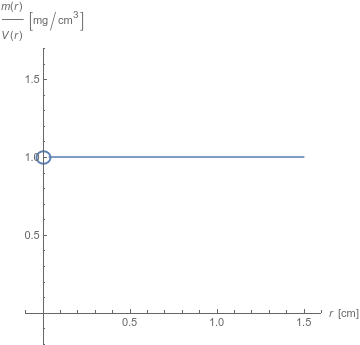 The point $(0,1)$ is omitted, because division by zero is undefined. To sneak up on the value there, we use a limit. Note that if the density field varied (small fluctuations around a mean density and/or a trend to higher or lower densities away from $x$) we would see these variations in the curve. This very simple model doesn't have such features.

I'll add another point of view, since the question only seems like something that's highly advanced or that which only comes up in that area of physics: What you are asking is precisely akin to the Zeno's arrow paradox: https://en.wikipedia.org/wiki/Zeno's_paradoxes#Arrow_paradox

Basically, I'm sure you are familiar with derivatives, but they are not intuitive when applied to arbitrary quantities. Certainly we can talk about an average speed over some duration ∆t, and reason that when restricting the duration towards a single instant of time, we get the instantaneous speed at a given moment – a useful quantity which we know is well-defined.

"But in order to have a speed, you'd need to travel, and you can't travel if time doesn't go on!" Yeah, it's the same deal with there not being an intuitive "instantaneous" density (dm/dV) if you look at a point of mass, but nevertheless we work with derivatives and they work. :)

1
Two formulas for current: how are they the same?

0
Center Of Mass Troubles
9
Delta Dirac Charge Density question
0
Density of a material in different dimensions
0
Point masses and infinite densities
6
How does one write density as a form?
1
Is there a charge density in quantum mechanics?
0
Mass density of a cylinder increasing with the square of the radius
1
Density $\rho$ in the Friedmann equations
2
From volume density to surface density
8
What does it mean to integrate with respect to mass?