Does the number of teeth in the gears of a bycicle matter when determining its gain ratio?

When talking about bycicles, it is usual to measure their gears by the number of teeth they have. This measure is then used to calculate the gear ratio: the ratio between the number of teeth of the front gear and those of the back gear. This in turn is calculated for each front-back gear combination available on a bike to describe the range of its achievable gains.

My physics knowledge is very limited, but when I imagine what determines those gains I come to the same conclusions as this answer: the gain is determined by the radiuses of the crank, the chain wheel (or front gear), the rear wheel, and the sprocket (or rear gear).

Of course, if the distance between teeth has to be the same for all gears (due to the chain being the same) more teeth means bigger radius and viceversa.

This feels odd to me: I have the feeling that having more teeth merely serves to distribute forces among them to prevent them from wearing out, but I'm unable to confirm it because I don't know how to approach the problem from a physics standpoint.

Does the number of teeth (on fixed radiuses) actually matter? If so, what are the principles behind it?

What matters is the distance your foot travels (mostly on the down stroke for recreational riders) divided by the distance the rear tire travels...for your mechanical leverage (inverse gain).

So if the gears are 1:1, then that is going to depend on the crank-arm length divided by the rear wheel diameter (plus some variation for tire thickness).

...unless you are running Biopace® or some other non-circular gearing, then there is additional leverage: 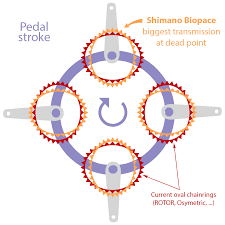 Not the answer you're looking for? Browse other questions tagged newtonian-mechanics geometry or ask your own question.

3
Does the law of Universal Gravitation apply to every matter?
2
When does a Trebuchet Shoot Its Projectile?
1
Does gravity matter when calculating work done horizontally?
0
Does a wheel deform more when its rolling or when its still?
4
Do I force the intercept to zero when determining the coefficient of friction?
4
How does moment of inertia transfer through a series of levers? (Specifically, a Piano Action)
1
Newton's third law (action and reaction) and work done with a wheel