I have another question about the third law of Newton (if you can check the last one that I posted) :

Why is it that the gravity that pushes me on the Earth is so powerful, but the reaction force (normal force) is so weak (I feel a force only on my foot, but even if I jump, gravity keeps me on the Earth). Newton says that for every action, there is an equal and opposite reaction, so why is it that the gravity is so powerful that it keeps me on the surface, but the reaction force is so weak, or is only my imagination?

Sorry for the editing, but I have another question:

If the normal force acts upward, why don't I accelerate?

... the reaction force so weak or is only my imagination?

The normal force is exactly as strong as the gravity force:

Why if the normal force acts upward I don't accelerate?

Some body is accelerated if the sum of all forces acting on the body is not zero.

Because the gravity force and the normal force are equal (but have opposite directions), the sum of both forces is zero.

When you don't touch the ground, there is no normal force. For this reason you are accelerated downwards.

It seems to me that you are mixing up the Second and the Third Law:

The gravity and normal force acting on you do not constitute an action-reaction pair for the purposes of Newton's Third Law. Newton's Third Law generally refers to pairs of forces originating from the same source, but acting on different objects, and does not require that the net force on either of the objects be balanced.

There is no pushing that you feel, indeed you do not “feel” the force of gravity directly.

When you are standing on the ground all you can feel is the normal force of the ground acting on you.
For example if you are in free fall there is no upwards push on you due to the ground and you cannot “feel” the force of attraction of the Earth, indeed you “feel” weightless.

. . . . . so why gravity is so powerful that keeps me on the surface but the reaction force so weak or is only my imagination?

The normal contact force on you due to the ground can feel “enormous”.
Just imagine what what you might feel if you fall and that results in a broken limb.

Why if the normal force acts upward I don't accelerate?

The downward force on you due to the gravitational attraction of the Earth has the same magnitude, so the net force on you is zero.

Here are the forces: 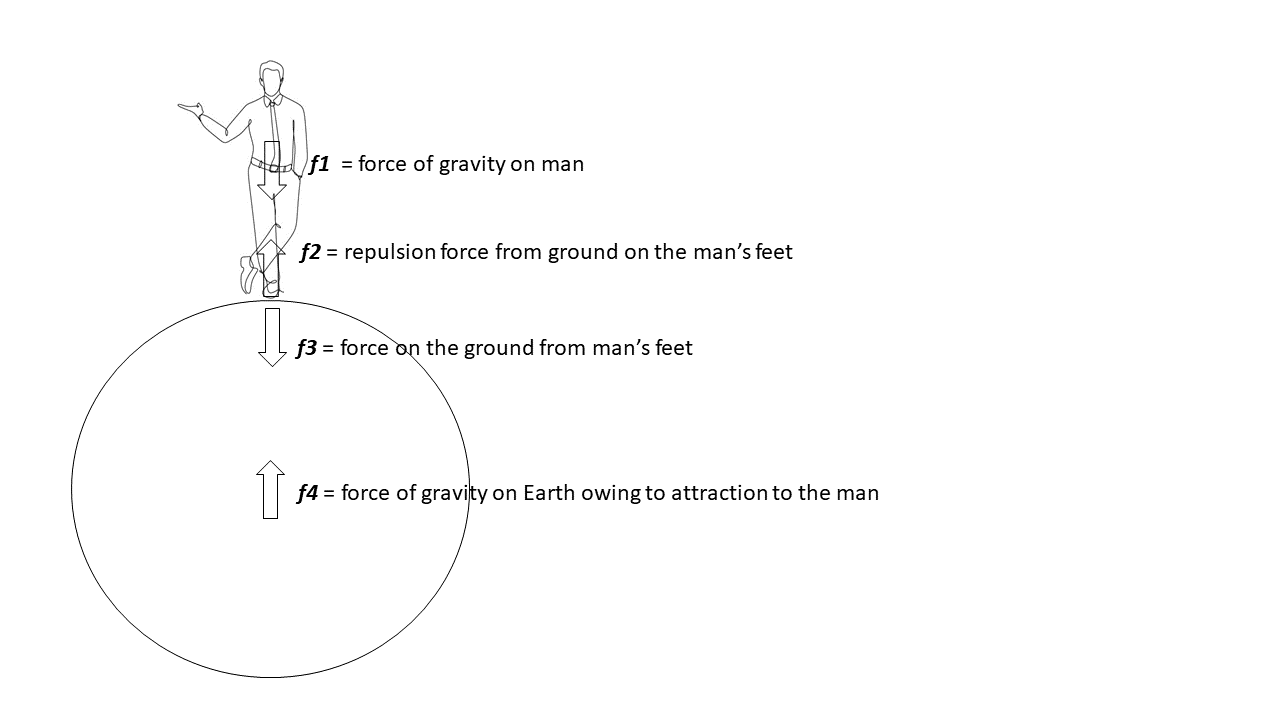 $f_1$ and $f_4$ are owing to gravity; they are of equal size and opposite direction.

$f_2$ and $f_3$ are owing to electrostatic repulsion; they are of equal size and opposite direction.

Here $f_2$ is just balancing with $f_1$ so the man is not accelerating. Gravity is not especially strong or weak compared to the electrostatic force here. They both have the same size. 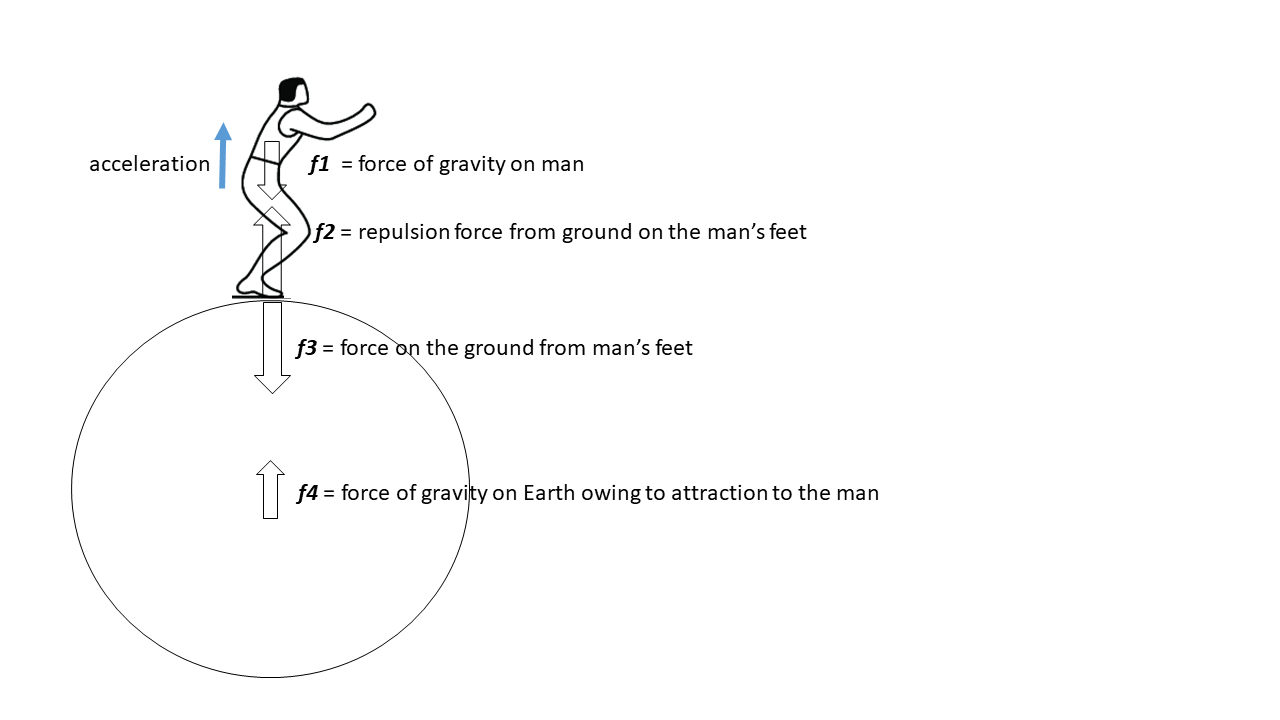 This picture shows a man who has just started to make a leap; his centre of gravity is accelerating upwards. Now the force on his feet ($f_2$) is larger than his weight ($f_1$). This is because the chemistry in the muscles have caused the muscles to expand, so he both pushes the Earth away and his centre of mass begins to accelerate upwards. The Earth also accelerates but since it is so heavy this acceleration is negligible. 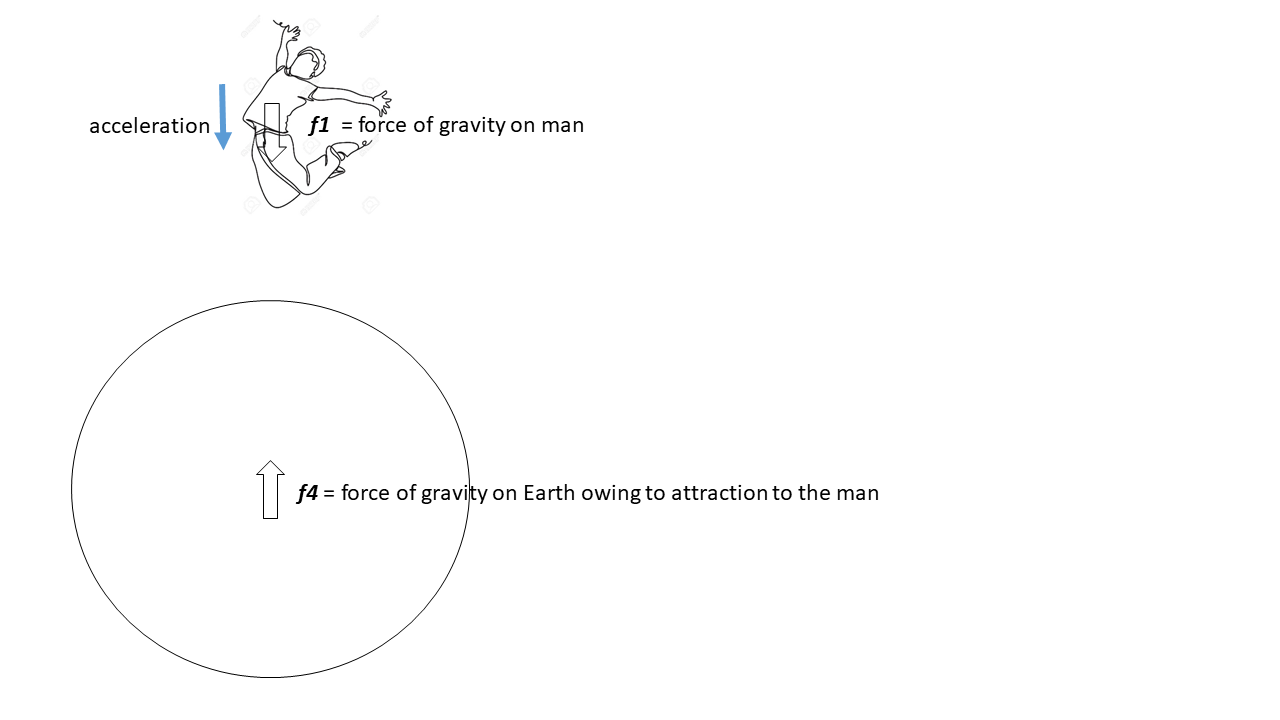 And here he is in freefall.

Newton's third law says the forces come in equal and opposite pairs, as indeed they do, but note that the partners in each pair act on different objects, and the parts of each pair are owing to the same interaction. They are two parts of one interaction, whether gravitational, or electrostatic, or whatever. It is fairly easy to jump off the ground, so gravity is not all that strong. The reason it is hard to jump right into orbit is that gravity keeps acting on you all the way up, whereas the force you can apply with your feet against the ground only acts for a short moment at the beginning of the jump. If you had a rocket pack offering just a little more force than your weight then you would keep on accelerating up and away. You will need a lot of fuel though.

Think about it this way: earth's gravity is exeeting a force on you and you are also exerting a force on the earth. Though, since the earth is so massive, it hardly shows any change.

Forces are equal, but masses are very different

For your second question: stand still relative to the ground. Are you accelerating? No. This is due to the normal force cancelling out the gravitational force since it is in equal magnitude. This is the heart of newton's third law

Also, see kartikey's comment to better understand the forces in play while you are standing

I think you are messed up with the cause of normal force and gravitational force .

Cause of the Normal force is explained here :

How can I stand on the ground? EM or/and Pauli?

Normal force which acts upon you is completely balanced by the gravitational pull of the earth (or you can say it the other way) as they have the same magnitude. So you can't accelerate upward with the normal force.

The reaction force is the same but the mass of the earth is so big it barely accelerates up and due to air friction it practically doesn't move at all?.

Not the answer you're looking for? Browse other questions tagged newtonian-mechanics forces newtonian-gravity free-body-diagram or ask your own question.

99
How can I stand on the ground? EM or/and Pauli?
0
Frustration with Newton's Third Law of Motion