Forces during the formation of hydrogen molecules

In my book it is given that for the formation of hydrogen molecules, hydrogen atoms come closer due to net attractive forces.

It is written that initially when the atoms were approaching towards each other from a distance the magnitude of attractive force was greater than that of repulsive force and hence they come closer and ultimately the system acquires a minimum energy state.

Currently the only possible way to explain the behavior of the atoms, molecules and, up to a certain extend, condensed matter is to use the methods (solving Schrödinger equation) and principles (Pauli exclusion) of quantum mechanics. This means that one needs to write down the Hamiltonian of the system, that is, find out the interactions between electrons and nuclei (which is just attraction or repulsion between charges) and solve the Schrödinger equation.

The problem is that beyond two body system (H atom) Schrödinger equation is so complicated that we need approximations for solving it. Even for the simplest molecule ($H_2$) Schrödinger equation cannot be solved exactly. If you want to learn how to treat hydrogen molecule quantum mechanically have a look at, for example, this lecture notes from Introductory Quantum Mechanics I course at MIT.

So, after this general introduction let me try to answer your questions.

I made a google search and found your book online. You say

In my book it is given that for the formation of hydrogen molecules, hydrogen atoms come closer due to net attractive forces.

It is written that initially when the atoms were at distance the magnitude of attractive force was greater than that of repulsive force and hence they come closer and ultimately the system acquires a minimum energy state.

However in your book in the beginning of the discussion it is clearly stated that "Consider two hydrogen atoms A and B approaching each other...". So, two H atoms (being electrically neutral) far from each other (ignoring gravity) will not attract each other. But if one (somehow) brings them closer at a certain distance (always attractive) van der Waals interactions kicks in. But your book does not even bother with that that. The only confusing thing the book makes is to call the-one-and-only Coulomb forces as "new attractive and repulsive" forces. There is nothing new about them and they are the only forces in action, at any time. 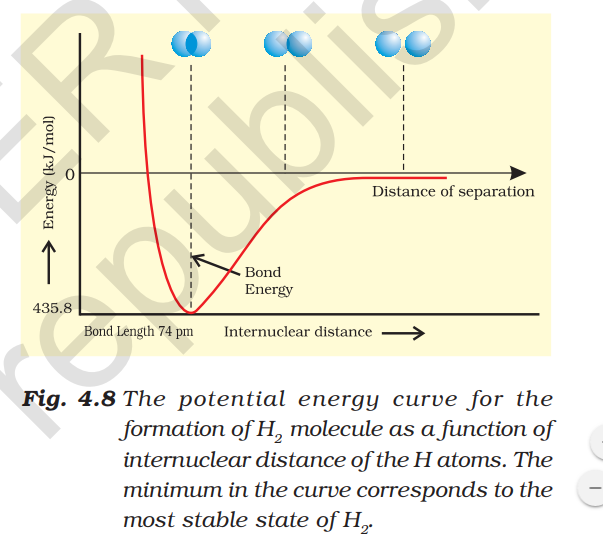 What this images says is that when two atoms are far away there is (essentially) no interaction between them but as they come closer there is an attractive force (van der Waals and/or Coulomb) and therefore a minimum at the potential well and this is the length of the bond between the two atoms. If one keeps decreasing the distance they start to repel (Pauli exclusion and/or Coulomb) each other.

Any explanation of the chemical bond based only on the list of attractive and repulsive contributions is badly missing the point. Speaking about new attraction forces is misleading. Those contributions are always there, and may result in an increase or decrease of energy, depending on the geometric configuration of the charges. Moreover, if the reason for bonding would be reducible to a list of attractive and repulsive force contributions it would become impossible to understand why Quantum Mechanics is essential to explain the formation of a bond.

The key conceptual point is that forces are just Coulomb forces. However, for any nuclear configuration, the average position of the two electrons is ruled by Quantum Mechanics. It is the non classical dynamics, but the quantum behavior of the two electrons which ensures that they spend more time between the two nuclei than elsewhere, thus providing the attractive "glue" which allows the H$_2$ molecule formation.

To really solve this, you should look at all the different ways the atoms (each with one electron and one proton) can be oriented relative to each other. If there is net attraction for every orientation, then they must always attract. (But that isn't true.)

If there is net attraction averaged over orientations, then they will attract on average.

If some pairs attract and some repel, then maybe ones that attract can form molecules and the others not.

Average over all the possibilities and you have solved a quantum mechanics problem.

Not the answer you're looking for? Browse other questions tagged forces hydrogen molecules or ask your own question.

2
What laws (formulas) govern forces between atoms?
1
About friction contributing to speed
3
Star formation confusion
0
Why hot molecules have higher velocities
7
Does the weak force have an attractive/repulsive force observable in everyday life like the other forces?
0
Are individual atoms inside a molecule (covalent) still really EM neutral?
1
Can hydrogen atom exchange induce attractional forces between $e^-e^-$?
0
Strength of intermolecular forces as a function of distance
0
Why do two molecules of an element attract each other?