Flow rate of an open tap

If I have an open tap such that there is a continuous stream of water falling through height $h$, is the flow rate the same at every point on $h$?

The average flow rate must stay the same all the way down, unless water is piling up somewhere. A possible exception is if the fall is so far that some of the water evaporates on the way down. But all the water has to go somewhere.

If the falling water column has cross-sectional area $A$ and speed $v$, the volume flow rate is $Av$. If the water is in free fall, it will have speed $v=\sqrt{2g(h_0-h)}$, where $h$ is the height of interest and $h_0$ is a height-like parameter that you twiddle to get the flow rate right at the tap. The constant volume flow rate gives $A\propto 1/v$, and you can plot the radius $r\propto \sqrt A$ to get the characteristic wide-at-top trumpet shape of water falling from a slowly-running tap. 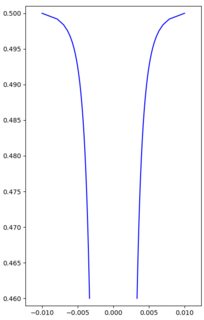 If you hold a bowl under the stream at every height, you do not expect the rate at which the bowl is being filled to change; it should be exactly the same rate as water is getting out of the tap, otherwise either extra water is being created in order to compensate or it is being vanished, which is in contrary to the conservation of water! Therefore the flow rate must be constant at any height.

To make the situation a little simpler:
1.let us neglect the viscosity of water for a while.
2.density of water remains the same at every point. Now, using Bernoulli's equation: 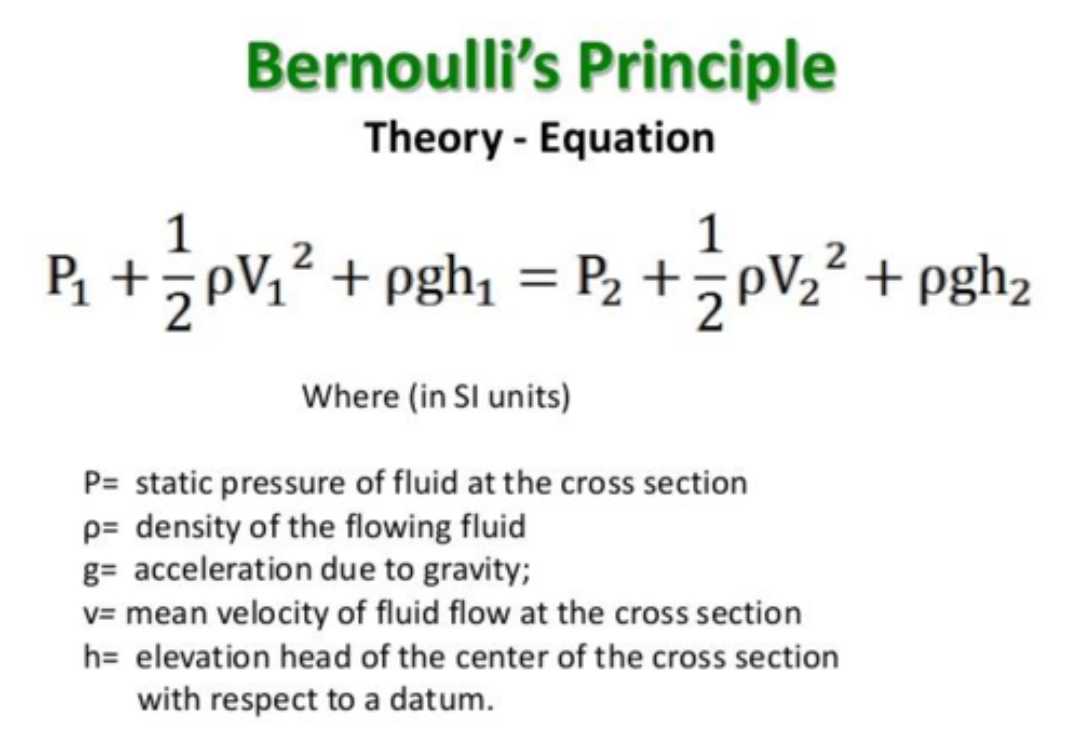 Let us compare two points in the stream at different heights but near the edge of the stream. So, the pressure at both these points will be almost equal to the atmospheric pressure. So the pressure terms on both sides of the equation will cancel out. Now as the density of water remains constant throughout, ${\rho}_1={\rho}_2=\rho$. Now, the equation will look like:

So, you can clearly visualize that if $h_1\gt h_2$ then $v_1$ must be less than $v_2$ to satisfy the equation. The rate of flow equals $\frac{dV}{dt} = A\times {v}$. Where ${v}$ is the instantaneous velocity. Now, according to the theory of continuity, $${A}{v}=constant$$ So the rate of flow will remain constant since as the velocity is increasing, at the same time the area is decreasing.

As the water in the stream is accelerated by gravity the diameter of the stream gets smaller, but the liters per minute flow rate does not change.

When you say "continuous stream" I assume you mean that water is leaving the tap at a constant rate (e.g. 10 liters per minute).

As others have noted, regardless the speed of the falling water, acceleration by gravity or not etc, the flow rate in volume per time interval is constant.

If you have a hose with an open end, and you hold it loosely in your hand a wide stream of water exits the hose at low speed and hits the floor a few feet in front of you. 10 liters per minute is going all over your shoes. How do you know the water is low speed? Hold a child's windmill toy in the stream. It will turn slowly. Simplistically the water pushes the windmill vanes out of the way at a low speed

If you squeeze the end of the hose a little, reducing the size of the opening, the water speeds up as it exits the hose. A narrow stream of water is now hitting the floor a few yards away from you. Put the windmill into the stream and it whizzes round quickly

In either of these configurations, if you got a 10 liter bucket and put it in front of you, and filled it with the hose free or pinched or a mix, it would still take a minute to fill.

The flow rate in liters per minute is not changed even though the speed of the water was varied by the restriction* - let's say your hose had an opening of size X and water came out at speed Y, when you squeezed the opening down to half its original size 0.5x , the water would accelerate to twice its speed 2y, so overall the maths is unchanged - double of a half is the same as 1 of 1

At some point in the fall the friction forces on the water from its velocity etc overcome the surface tension and conspire to break the stream into droplets (Rayleigh instability). This introduces a potential quantization problem for you because instead of being a continuous stream, the water flow is now "in packets" and depending on how or where you measure the flow and how fast your measuring device is you may decide that anything between "no water" and "a lot of water" is flowing..

Suppose you have a sensor that measures the presence or absence of a water droplet and its size. In the space between droplets, no water is flowing. When a droplet is passing the sensor, some water is flowing. If water broke into droplets and there were 5 milliseconds between droplets (like there might be 2 seconds between the lead F1 car and the guy in second place) and then it took a droplet 2 milliseconds to pass your sensor, then your sensor is going to be detecting no water for 5 milliseconds and then detecting water for 2 ms.

If you said to your sensor "sample for 1 millisecond and tell me how much water flows", it's a good bet that it'll say "none" but it could say "X liters". Thing is, by taking this very tiny sample time you cant ever get a full picture cos you can't even sample the passing of a full droplet.. However, if you asked continuously for 1 ms samples and put them on a graph you'd have a square wave graph that 5/7ths of the time was at 0, and 2/7ths was at X - so you could say "the flow rate is not the same depending on what height in the column you sample at, and how long you sample for; sometimes it's 0, sometimes it's more".

If you swapped this out for "sample for 1 second intervals, continuously", then you'd end up with more or less a straight line graph. I say more or less because in any adjacent samples you could measure slightly different amounts (e.g. you might measure liters of 0.166, 0.166, 0.167, 0.166, 0.166, 0.167), but this is a side effect of the quantization of the sampling method rather than a true variation in the flow rate of the water from interval to interval

If we aren't measuring flow using some laser beam break/make/meaaure droplet size discrete sample method and just taking the simple route of timing how long it takes to fill a 10 liter bucket then it doesn't matter how high above the bucket the tap is/how fast (gravity or squeezed hose) the water is going when it hits the bucket inner; so long as none of it splashes out or got lost on the way down, it still takes the same time to fill the bucket

Not the answer you're looking for? Browse other questions tagged fluid-statics flow bernoulli-equation or ask your own question.

66
Why does water falling slowly from a tap bend inwards?

1
Does the termination point(level) influence water flow from a pipe
0
Turbulent and smooth flow of water from a tap
0
z in incompressible flow equation
0
How to calculate the flow rate?
1
Will mass flow rate be the same in these tank-pipe-ideal fluid systems?
0
Bypass valve, pressure and flow rate
1
How does one calculate the expected leak rate through a hole, and the pressure drop due to that leak?
66
Why does water falling slowly from a tap bend inwards?
1
How can I calculate flow rate and velocity of fluid at the exit of a garden storage tank?