I will briefly summarize what I know and then ask my questions. If you spot mistakes in my summary, please tell me.

Formally, one can arrange the quark flavors in a SU(n) fundamental representation. One can then do tensorproducts for flavor and spin to construct other representations like baryons and mesons. An example: $2\otimes 2 = 3\oplus 1$ for spin SU(2) gives scalar- and vector mesons, $3\otimes \bar{3} = 8\oplus 1$ for flavor SU(3) gives the eightfold way for both scalar and vector mesons.

Why do these tensor methods predict the right hadrons? One also finds hadron multiplets for flavor SU(4), which is badly broken. As I got it, there is no sense in doing tensorproducts in representations of broken symmetries. What did I miss?

It is instructive if you understand how the quarks were discovered, at the time of the eightfold way.

Here is the octet 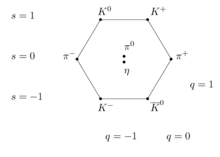 The meson octet. Particles along the same horizontal line share the same strangeness, s, while those on the same left-leaning diagonals share the same charge, q (given as multiples of the elementary charge).

Flavor symmetries are broken when you have different masses for the quarks after electroweak breaking. But the quantum numbers are not affected by the electroweak breaking, they were experimentally discovered to be conserved (and the laws governing their changes) after breaking anyway, and it is assumed they are the same before the symmetry breaking mechanism; so maybe you should rewrite this:

For the quantum oscillator, the Heisenberg algebra $[a,a^\dagger]=1$ does not commute with the number operator Hamiltonian: it ladders you up and down to non-degenerate states. For the Hydrogen atom, the spectrum-generating symmetries so(4,1) and so(4,2) connect states of different energy, as the Hamiltonian is not a function of their Casimir invariants, but, instead, contains "ladder" pieces moving eigenstates of it to different, non-degenerate, eigenstates. When one turns off such pieces, the SGA collapses to a basically dull degeneracy algebra.

Recall how su(3) works. On the one hand, in the limit of equal quark masses, it is a good degeneracy symmetry. But, we are far away from this limit. In fact, the strange quark mass differs from the u,d masses by more than $\Lambda_{QCD}$, or the constituent quark mass, a third of the proton mass. The genius of flavor su(3) is first it tabulates all states made up of these quarks, a pretty tabulation. The su(4) pyramid does this as well.

But, importantly, second, it tells you how this symmetry is broken, by U-spin and V-spin operators, in a systematic, predictable, way: it is such amplitudes, couplings, Clebsches, etc... that expedite an awful lot of the heavy lifting involved in hadron interactions. (Doing this sort of thing with constituent quark wave functions is a godawful mess... you want to know how it's done, and it makes sense, but in all likelihood you won't use it in all but simple estimates, like magnetic moments.)

You may well do the same for flavor su(6), but our visual intuition is lacking in 5 dimensions, so I don't know anyone doing this. In a way, they do, when they segregate the 3 light quarks off the 3 heavy ones, in "WIsgur" stunts, and connect the "brown muck" QCD effects of each.

QCD is blind to all such structures: it couples the same way to all quarks, of whatever mass or flavor, but its effects vary with their masses. It doesn't not alter flavor.

As the other answer points out, such flavor groups are also broken by the EW symmetry, which does alter flavor, adding another layer of systematic complication to the picture.

It is fair to say that "symmetry operators" is an imperfect physics synonym for "Lie algebra generators", whose currents are not always even close to being conserved, as you observe. Lie theory, however, is so powerful it helps a lot even when it appears lost.

Now flavor numbers. These are mere tags reminding you what quark you are discussing. They correspond to independent rephasing of each flavor quark separately, and their currents are conserved and do nothing. QCD, unlike the weak interactions, does not mutate flavor, same as electromagnetism (which can still tell the difference of their charges).

As a result, flavor charges, like, e.g., S, are strictly conserved, outside the realm of the weak interactions. They are not traceless su(3) generators, obviously, and same for su(2), su(4)... So nothing breaks them, and QCD treats them all equally. They are not part of your "broken flavor symmetry" canard...

4
Why should the mass of leptons to be near of proton and QCD/chiral scales?
14
Nambu-Goldstone bosons from a quantum anomaly symmetry breaking?
53
Symmetries of the Standard Model: exact, anomalous, spontaneously broken
1
Pions as a superposition of quark states
2
Why is quark flavor just a SU(N) group?
5
Quark model extension to all six flavors
0
If quark current masses were equal, processes like $dd \to ss$ would be forbidden?
1
Number of gluons inside a proton/neutron