Can you fall into a black hole, and then back out again?

There is a innumerable number of questions on this site about black hole event horizons, the possibility of falling in and back out again, but none of them answer my question specifically.

The confusion arises because it also has an external mathematical surface, called the ergosphere, where in fact it is possible to come in to and still come out. This ouTer surface in not a true horizon, but it is a surface inside of which a particle (or ideal observer) has to rotate with the BH. Penrose determined that it is indeed possible to come into the ergosphere with a certain energy and come out faster, with a higher energy. This is conceptually a way to extract energy from the BH. But the more important surface for the question is the event or inner horizon. It is a true horizon and if you go inside it you can never. Come out.

Is it possible to fall into a black hole, then come back out?

Are black holes naked singularities for an observer within the event horizon?

Now the first one says, what I always have read on this site everywhere, that is, if you enter the EH, you can never return.

But the latter states, that if you fall through both horizons, that includes the inner one (the real EH), then you can fall back out again.

1.Is it possible to fall into a black hole (through the real EH), and then back out again?

Theoretical black holes, such as the Reisner Nordstrom black hole, Kerr black hole, Schwarzschild black hole, etc. when maximally extended, have internal geometry that includes wormholes, i.e. trajectories that pass into the the event horizon and out in another patch of spacetime.

Realistic black holes, on the other hand, are not eternal. Consider a star for example. In the beginning, it is just diffuse dust without an event horizon. The star coalesces from the primordial dust, supporting its self-gravity with the radiation pressure generated by nuclear fusion. Eventually, the start runs out of hydrogen, helium, etc, its core becomes iron rich, fusion no longer releases energy, and the core of the star collapses. If the star was massive enough, between 20 and 50 solar masses, the star collapses directly into a black hole.

The resulting black hole does not contain a worm hole: the part of the geometry that would have contained a bridge to another patch of spacetime is now occupied by the surface of the collapsing star. That is to say, if we believe general relativity inside the horizon, we conclude that there is no way out of a real black hole. 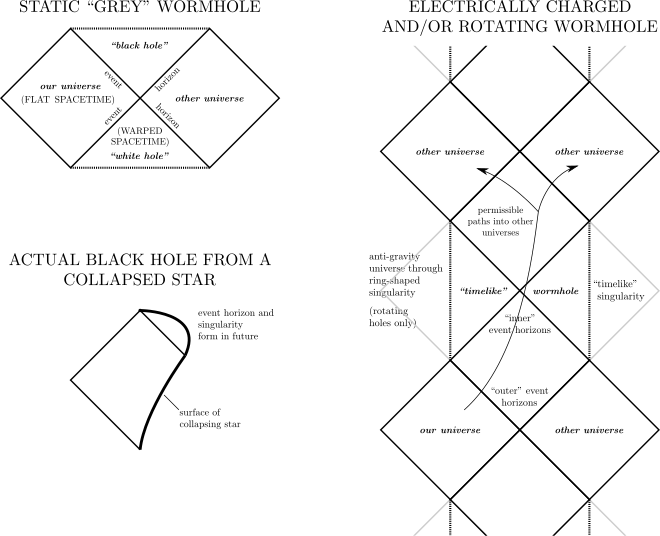 If we introduce quantum mechanics, we learn that black holes radiate away their mass through Hawking radiation. At early times, Hawking radiation is thermal, and does not contain any information about you if you fell into the black hole. However, after the black hole evaporates a significant amount of its mass (entropy), some theories of black hole evaporation predict that the radiation becomes non-thermal, and contains information about the stuff that fell in. In this sense, a theoretical observer in the far future may be able to tell that you fell in, although you would certainly not be leaving in one piece.

Is it possible to fall into a black hole (through the real EH), and then back out again?

In astrophysics, an event horizon is a boundary beyond which events cannot affect an observer.

Therefore nothing emerging from behind the event horizon can be observed on the outside.

3
Is it possible to fall into a black hole, then come back out?
0
Why does linear motion not emit gravitational waves?
0
Are black holes naked singularities for an observer within the event horizon?