Why are aerodynamic / streamlined shapes always stumpy at the front?

I'm building an autonomous boat, to which I now add a keel below it with a weight at the bottom. I was wondering about the shape that weight should get. Most of the time aerodynamic shapes take some shape like this:

The usual explanation is that the long pointy tail prevents turbulence. I understand that, but I haven't found a reason why the front of the shape is so stumpy. I would expect a shape such as this to be way more aerodynamic:

Why then, are shapes that have good reason to be aero-/hydrodynamic/streamlined (wings/submarines/etc) always more or less shaped like a drop with a stumpy front?

You are correct if your boat will only travel in a straight line.

In real life the motion of the boat will often have a yaw angle, so that it is moving slightly "sideways" relative to the water. For example it is impossible to make a turn and avoid this situation.

If the front is too sharp, the result will be that the flow can not "get round the sharp corner" to flow along both sides of the boat, without creating a lot of turbulence and waves which increase the drag on the boat.

Any speculation about what shape might be best is meaningless without specifying the flow conditions. For the keel on a boat, the main one is the Reynolds Number, a parameter that is proportional to the the length multiplied by the speed.

In most low-speed applications, a sharp leading-edge is not the best. With any incidence, the flow will tend to separate too readily, but even when going straight through the fluid there are velocity gradients that need to be considered. The flow increases and then decreases in speed as it moves along the keel, and the drag that this causes depends on the details of the viscous boundary layer development.

The figure below (which I generated using a readily available analysis code) shows some approximate optimizations of 2D foil sections at several different values of Reynolds Number. The best shapes at the highest speeds (at the top of the figure) have smaller leading-edge radii than the low-speed ones (at the bottom), which are extremely blunt. 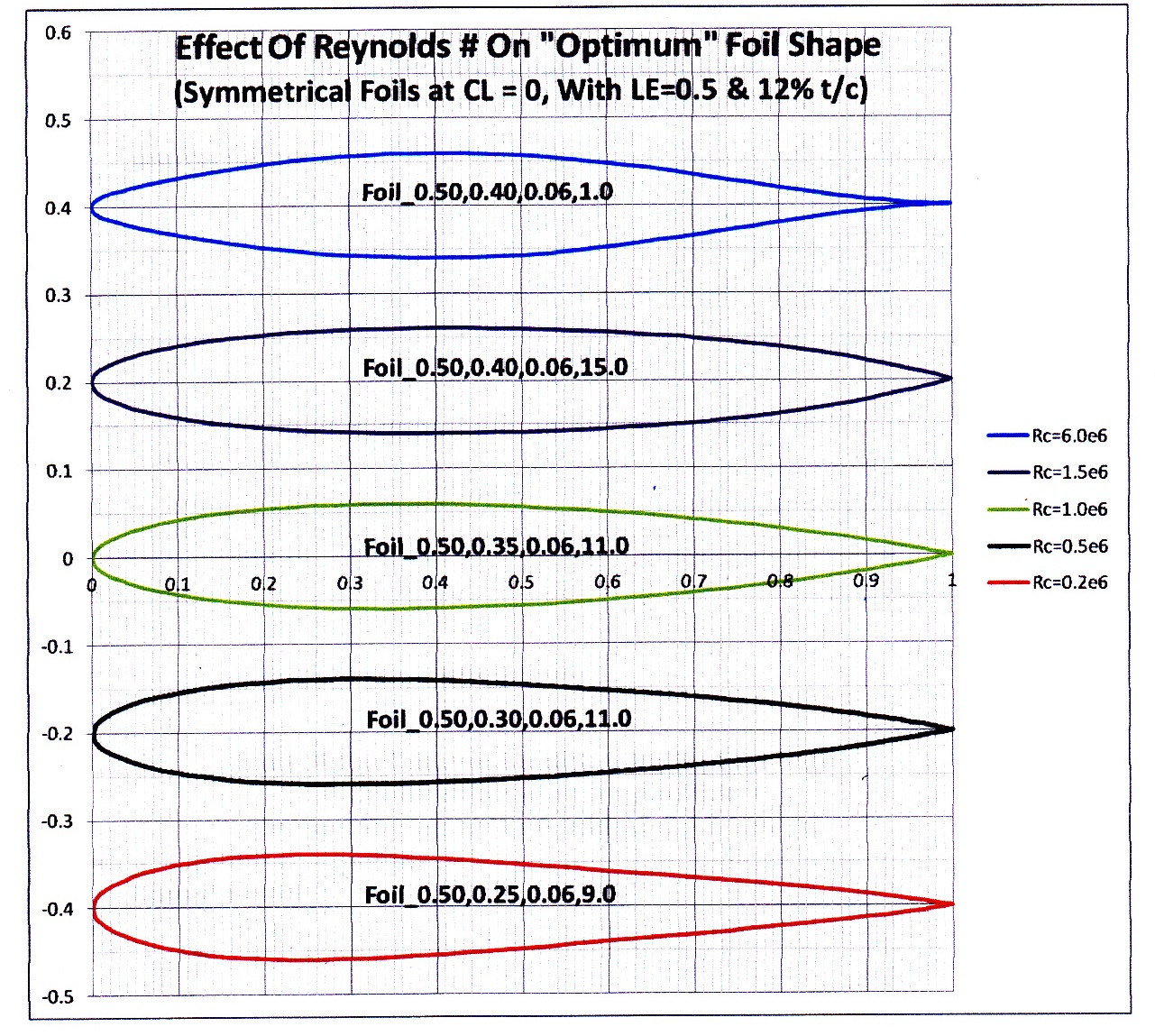 As mentioned above, indeed, this shape is more aerodynamic when parallel to the vector field (flow direction) in particular. You see this shape often on long distance Kayaks and Canoes that move in relatively straight lines. But this shape is certainly not ideal for changing directions, as the drag will be greater than with your first shape.

A reflex curve at the front, as in your second image, gives high pressure across much of the frontal area, causing high drag. A blunt curve, as in your first image, gives high pressure over only a small area and low pressure around the outer forebody, actually drawing the craft forwards. The long tail behind reduces the inward curl, and hence suction, which would drag it back.

Not the answer you're looking for? Browse other questions tagged fluid-dynamics aerodynamics turbulence aircraft or ask your own question.

23
Why planes have propellers in front but watercraft have them behind?
2
Why are the backs of airplanes curved?
3
Why does a propeller suck in air from the front?
22
Why is paper (or any tailless) airplane pitch stable?
0
Why an aircraft or a ship produce pressure waves both in front and behind them?
0
Are aerodynamic car rims really aerodynamic?
19
Why is an airfoil shaped like a teardrop?