More confusion: How can we even say that the probability of any velocity is zero,since that implies $$1/\infty=0$$which isn't true.

I think there is a more intuitive argument:

We assume the following:

If we were to graph this, it would simply look like this: 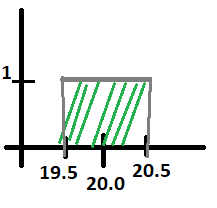 That we need an infinite amount of smaller rectangles, to know the exact speed. But each rectangle then has a width of $0$. In the language of statistics, this means, that the probability for a particle to have any particular speed is $0$, while the probability for it to have a certain speed within an interval may be non-zero.

This is actually two questions rolled into one. One is about the mathematics of probability, and how probability can be used with continuous spaces. The other is about physics and how we use mathematics to model it.

I'll focus on the former.

This all works when the space of possible outcomes is finite; and with a bit more effort, when it is countably infinite.

But if we want to use probability theory for continuous variables (in a space such as $\mathbb{R}$ or $[0,1]$) - and we do, since that is an extremely useful thing to do - we have to step back from such an approach. There is no way to assign a probability to each $X\in[0,1]$, such that uncountably many values have a positive probability, and the sum of probabilities is 1.

The mathematical branch of assigning a size to every set, which satisfies a few intuititive properties, is called "measure theory". This is a generalization of the concepts of length, area, volume, integrals, and so on. Probability theory is basically measure theory when we require that the measure of the entire space is 1.

Note that it is actually impossible to assign a measure to every set. There are too many subsets of our space, and they are too weird.

But we don't have to. For the purposes of random variables on a subset of $\mathbb{R}$, it is enough to define a non-decreasing function $F(x)$, which specifies the probability that $X\le x$. From this we can calculate the probability of $X$ to be in any reasonable set we choose. This function is called "cumulative distribution function"

If $F(x)$ happens to be differentiable, we can talk, about its derivative $f(x)=F'(x)$, which we call "probability density function". We can also define a distribution by its PDF, but this is less general, since not all CDFs are differentiable.

So we can't meaningfully talk about the probabilities for specfic outcomes of a continuous random variables, we can talk about their probability densities, and this tells us which regions are more likely. While we will never find a molecule with a speed of exactly $1 m/s$ or $2 m/s$, we are more likely to encounter a speed of around $1m/s$ than around $2m/s$, if that's what the densities tell us.

I didn't go into the question of whether gas molecules exist, whether they are tiny billiard balls or quantum wave functions, whether they have velocities, whether the velocity is continuous or discrete, etc. I'm just assuming they have an unknown velocity which is modeled as a continuous random variable. That's a useful model for many applications.

Regarding the bit at the end:

First, having a probability of 0 does not really imply that $1/\infty=0$. Probabilities of things can be 0 without implying anything. It is true, though, that you can't have uncountably infinitely mutually exclusive events each with a positive probability.

Second, it is definitely not not true that $1/\infty=0$. $\infty$ is not the mysterious beast high-school teachers want you to believe it is. There are perfectly legitimate toplogic/algebraic structures, such as the Riemann Sphere, where $\infty$ is a full-fledged member, and $1/\infty=0$.

Finally: Note that the word "model" appeared several times in the answer. This is no accident. The truth is that we have no idea how physics actually works. What we do have is mathematical models of it. All models are wrong, but some models are useful. Gas molecules don't actually have probability densities to have certain velocities, we just model them as such.

This is something that should be kept in mind when asking questions like this. As I mentioned at the start - understanding the model, and understanding how we can use the model for a physical situation, are two different things.

In this case I think the answer is given by the velocity density. In fact you cannot have a precise value of a velocity because $|\boldsymbol{v}|\doteq v\in\mathbb{R}$ and so is a continuous space; clearly you have to set probability $0$ for a point in that space. But the probability to have a velocity in an interval is non-zero once you consider $v\text{d}v$.

This concept may become useful in a statistical, pre-quantum mechanical description, because you cannot observe a velocity value of a particle with arbitrary precision; you just have a probability of catching it inside an interval.

There's a few ways to answer this question.

One way is to revert to quantum mechanics. The momentum states of particles in a box with finite size are quantized, so there are a finite and countable number of states below the energy of the system that the particles can take.

But this doesn't really get at the heart of the question, which is how can we observe events that have probability measure 0. I am not an expert, but I believe mathematicians answer this by saying essentially

you are misinterpreting what 0 means in probability theory.

e.g. probability 0 does not mean impossible, 0 is a sort of limit. But, personally, this doesn't sit very well with me.

Another more physical way to get around this is to remind yourself that "you never have infinite precision," (this answer was given elsewhere in this post) so you must consider intervals of possibilities. Mathematically, this is totally sufficient, however it does leave something to be desired philosophically.

My preferred way of resolving this is to remember that these models are just that, they are models. Just because a mathematical model yields numerical answers that are aligned with experiments, it does not mean that the quanitities you are describing mathematically are ontologically real. (e.g. see the debate in QM about the nature of the wavefunction)

To make this POV more concrete consider the example: In statistical thermodynamics, we often take the "thermodynamic limit" of a system by taking the number of particles to infinity. Obviously there are not infinite particles in any system, but there are so many that the limit still yields a good enough description of the situation for the bulk properties of the material.

So you can see that this issue basically arises from using the continuum to describe the physical world. What to make of this fact is still debated amongst physicists and mathematicians. However, this does not mean our current models do not constitute perfectly consistent mathematical systems that can be used to make predictions.

Your question essentially applies to almost all physical equation or formulas. The problem is that physical equations and their solutions provide mathematical models for the real world and are always an approximation. As an example: a circle, meaning a pure mathematical and infinitely precise circle, does not exist in the real world. But for real world applications it provides a very handy model to perform calculations, e.g. to calculate the area if you are only given the radius. For that to work, however, you must assume that the mathematical model is a good model for your real world object. A wheel that doesn’t wobble for example.

In your question specifically, the trillions and trillions of molecules in the gas behave macroscopically as one continuous material, which justifies the use of mathematical smooth statistical model. Applying it to real world situations you can only measure how many molecules were found in a finite interval of a range of velocities, as explained in other answers.

Others have given answers as to why the velocity of a single particle is unattainable, but I'll try to explain the errors in your question.

You state that there are an infinite number of speeds thus a 0 probability of any one speed, yet this assumes we don't live in a discreet universe where there is a minimum distance like the Plank length. I'm not sure if the universe is discreet or not, maybe this is another unknowable. But without first proving the universe is continuous, we do not have the foundation to answer your question.

Therefore you can find particles moving at some velocity even though the probability of moving at exactly that velocity is zero.

No, it's not. Probability distribution follows Maxwell–Boltzmann law : 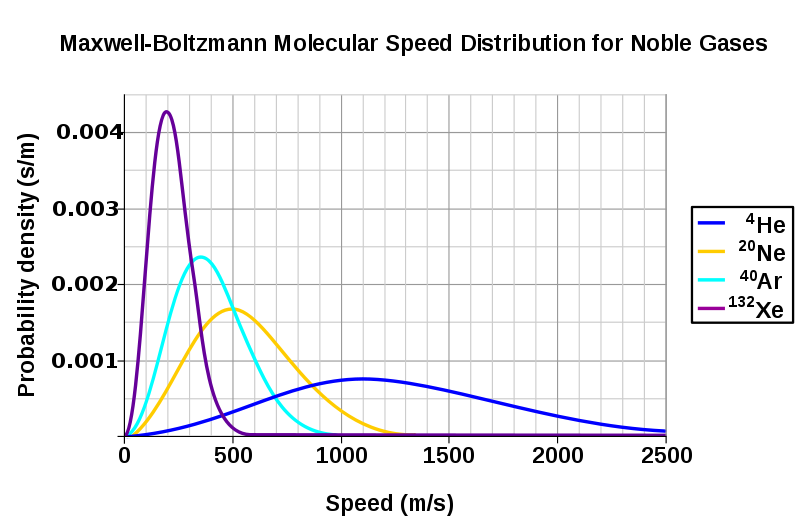 This speed distribution probability law is of Gaussian type, so there is a central speed, where we most likely find random molecules with it. And checking other speeds farther from central - gives monotonically decreasing probability to find molecule with such speed.

Not true again. Molecule speed is bound to system temperature, so it can't have infinite possibilities for velocity. Lets say i cooled down gas to absolute zero, so in that case situation will be almost opposite to your claim - all molecules will stop moving in $0K$ temperature, so we can say that there's no any possibility of molecule having speed other than $0 ~\text{m/s}$.

Not the answer you're looking for? Browse other questions tagged thermodynamics statistical-mechanics probability gas or ask your own question.

13
What are the differences between a $\psi$-epistemic ontological model and a $\psi$-ontic model of quantum mechanics, exactly?
2
Why the potential is not infinite?

10
How can point-like particles in an ideal gas reach thermodynamical equilibrium?
9
Mathematically possible vs physically probable outcomes
0
How can there be any probability of finding the molecules clustered in half of the box,the other being empty?
3
Can Quantum Mechanical Potential have a Probability Distribution
1
Can a gas molecule theoretically have zero velocity?
1
How does one regain the Maxwell-Boltzmann distribution using relative velocity and extensivity?
0
How a compression of gas molecules change their velocity therefore their KE?