Why is gravity such a unique force?

My knowledge on this particular field of physics is very sketchy, but I frequently hear of a theoretical "graviton", the quantum of the gravitational field. So I guess most physicists' assumption is that gravity can be described by a QFT?

But I find this weird, because gravity seems so incredibly different from the other forces (yes, I know "weirdness" isn't any sort of scientific deduction principle).

Not only does gravity have a vastly weaker magnitude, it also has a very strange interaction with everything else. Consider the Standard Model interactions: 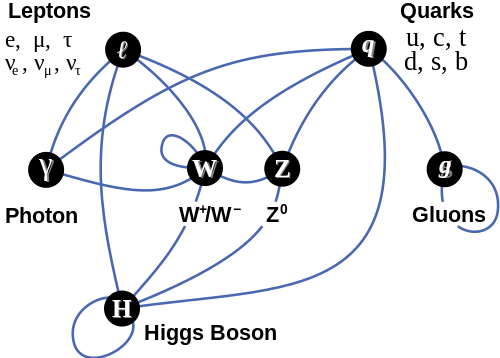 No particle (or field) interacts directly with all other fields. Heck, gluons only barely interact with the rest of them. So why is it then that anything that has energy (e.g. everything that exists) also has a gravitational interaction? Gravity seems unique in that all particles interact through it.

Then there's the whole issue of affecting spacetime. As far as I'm aware, properties such as charge, spin, color, etc. don't affect spacetime (only the energy related to these properties).

The short answer for why gravity is unique is that it is the theory of a massless, spin-2 field. To contrast with the other forces, the strong, weak and electromagnetic forces are all theories of spin-1 particles.

Although it's not immediately obvious, this property alone basically fixes all of the essential features of gravity. To begin with, the fact that gravity is mediated by massless particles means that it can give rise to long-range forces. "Long-range" here means that gravitational potential between distant masses goes like $\dfrac{1}{r}$, whereas local interactions most commonly fall of exponentially, something like $\dfrac{e^{-mr}}{r}$, where $m$ is the mass of the force particle (this is known as a Yukawa potential).

Another important feature of massless particles is they must have a gauge symmetry associated with them. Gauge symmetry is important because it leads to conserved quantities. In the case of electromagnetism (a theory of a massless, spin-1 particle), there is also gauge symmetry, and it is known that the conservation of electric charge is a consequence of this symmetry.

For gravity, the gauge symmetry puts even stronger constraints on the way gravity interacts: not only does it lead to a conserved "charge" (the stress energy tensor of matter), it actually requires that the gravitational field couple in the same way to all types of matter. So, as you correctly noted, gravity is very unique in that it is required to couple to all other particles and fields. Not only that, but gravity also doesn't care about the electric charge, color charge, spin, or any other property of the things it is interacting with, it only couples to the stress-energy of the field. For people who are familiar with general relativity, this universal coupling of gravity to the stress energy of matter, independent of internal structure, is known as the equivalence principle. A more technical discussion of the fact that massless, spin-2 implies the equivalence principle (which was first derived by Weinberg) is given in the lecture notes found at the bottom of this page.

Another consequence of this universal coupling of gravity is that there can only by one type of graviton, i.e. only one massless, spin-2 field that interacts with matter. This is much different from the spin-1 particles, for example the strong force has eight different types of gluons. So since gravity is described by massless, spin-2 particles, it is necessarily the unique force containing massless spin-2 particles.

In regards to the geometric viewpoint of gravity, i.e. how gravity can be seen as causing curvature in spacetime, that property also follows directly (although not obviously) from the massless spin-2 nature of the gravitons. One of the standard books treating this idea is Feynman's Lectures on Gravitation (I think at least the first couple of chapters are available on google books). The viewpoint that Feynman takes is that gravity must couple universally to the stress tensor of all matter, including the stress tensor of the gravitons themselves. This sort of self-interaction basically gives rise to the nonlinearities that one finds in general relativity. Also, the gauge symmetry that was mentioned before gets modified by the self-interactions, and turns into diffeomorphism symmetry found in general relativity (also known as general covariance).

All of this analysis comes from assuming that there is a quantum field theoretic description of gravity. It may be concerning that people generally say we don't have a consistent quantum theory of gravity. This is true, however, it can more accurately be stated that we don't have an ultraviolet complete theory of quantum gravity (string theory, loop quantum gravity, asymptotically safe gravity are all proposed candidates for a full theory, among many others). That means that we don't believe that this theory of massless spin-2 particles is valid at very high energies. The cutoff where we think it should break down is around the Planck mass, $M_p \approx 10^{19}$ GeV. These energies would be reached, for example, at the singularity of a black hole, or near the big bang. But in most regions of the universe where such high energies are not present, perturbative quantum general relativity, described in terms of gravitons, is perfectly valid as a low energy effective field theory.

Finally, you noted that the extremely weak coupling of gravity compared to the other forces also sets it apart. This is known as the hierarchy problem, and to the best of my knowledge it is a major open problem in physics.

Regardless, I hope this shows that even hierarchy problem aside, gravity plays a very special role among the forces of nature.

When you ask "Why is gravity such a unique force?" then you should know that in the framework of General Relativity gravity is not a force at all. In General Relativity energy (for example the mass of an object) cause curvature. The movement of other objects is influenced by this curvature - they travel along the path of shortest distance between two points (called geodesic), which is not necessarily a straight line. Thus, objects are "free falling" as long as "real forces" like electromagnetism prevent them from going on a geodesic. For example, the electromagnetic force is responsible for the repulsion between the ground on which you stand and your shoes. This force prevents you from going on the geodesic (falling towards the centre of the earth). We interpret this process wrongly as a gravitational force pulling us down.

That's the picture of General Relativity. The electromagnetic, the weak and the strong force are the real forces. The formulation of these forces as Quantum Field Theories is called the Standard Model. This is the model you pictured.

Both General Relativity and the Standard Model are tested experimentally and they give very good results. But both theories are incomplete: the Standard Model does not include gravity at all and General Relativity is not a Quantum Theory. This is weird since our understanding of the world suggests that every fundamental theory should be a Quantum Theory.

We do know quite a bit about QFTs (matter particles and force carriers) on a curved (but fixed) background. But we haven't yet managed to consistently include the backreaction on dynamical spacetime i.e. how energy densities of things in the QFT back react on spacetime and affect it's curvature. There are attempts motivated by good theoretical considerations, but it's safe to say that nothing we've empirically observed so far directly validates those attempts.

The contemporary view of quantum field theories is as being effective theories at some energy scale. Einstein's GR tells us that gravity is a classical field theory with the metric being the dynamical variable (there are also slightly different formulations). We take wave-like solutions for the metric, in linearized GR and give them a particle name i.e. gravitons (just like any other field theory). Also, Weinberg proved that the QFT of a spin 2 field must behave like GR at low energies. So in that effective sense, we refer to gravitons being the force carriers of gravity.

Gravity couples to the energy-momentum tensor. And if you try to formulate QFT on a dynamical background, you will see that the sensible action you can write will have the metric coupled to every term in the lagrangian. So, operationally, that's why gravity couples to all other field content.

Not the answer you're looking for? Browse other questions tagged gravity quantum-gravity stress-energy-momentum-tensor unified-theories carrier-particles or ask your own question.

1
Gravity Vs Electrostatics
1
Why is gravity so weak?
67
Why do we still need to think of gravity as a force?
37
What does it mean to say "Gravity is the weakest of the forces"?
34
Can all fundamental forces be fictitious forces?
4
Did we just misunderstand gravity?
4
Can other fundamental forces bend spacetime?
4
Why is there not a General Relativity for forces other than gravity?
-1
Why is gravity so special?
0
Is the theory of electromagnetism very incomplete in physical interpretation?
See more linked questions

42
Do gravitons interact with each other?
6
Why is there a need to unify quantum mechanics and general relativity and what is meant by such a unification?
4
How can particles account for the curvature of spacetime?
79
If gravity is a pseudoforce in general relativity, then why is a graviton necessary?
0
Gravitons (real) passing through a black hole