However, I could only understand why sonic booms are produced when the source speed is equal to the speed of sound.

When the source emits a compressional pulse, it virtually remains fixed to the source, as both move at the same speed.

Now when a second compressional pulse is produced, it constructively overlaps with the initial pulse, and so on the amplitude keeps getting really large and results in a sonic boom.

For instance, if the speed of the source is twice the speed of sound, it emits a compressional pulse, travels ahead of the wave, and in a further point in space emits another pulse.

I can only see a constant distance between these pulses, and I cannot see how they would constructively interfere to give a sonic boom felt by the observer who is along the line that the source travels.

Would appreciate help in understanding what actually happens in the second part.

Consider a set of the wave crests (the pressure maxima) from a beeping object that has moved through a two-dimensional medium at twice the speed of sound. They make up circles that intersect at the points that expand out away from the trajectory of the object. At first it indeed looks like the maximum pressure increase could be 2×, not unlimited as in the case of motion exactly at the speed of sound. 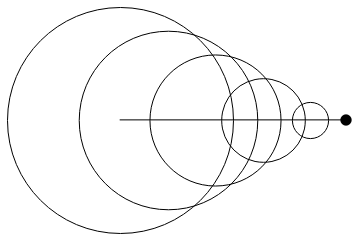 As the time passes, these points expand out, but remain on the same lines, with the lines being at the same distances from each other. At the same time, the radii of the circles increase, and their curves become straighter. In the following image the black circles represent further evolution of the ones shown above, while the gray ones are the wave crests generated after the black ones. 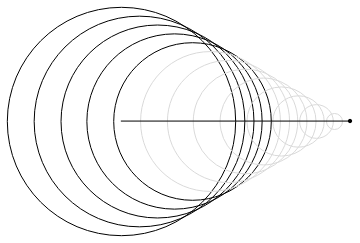 If we zoom in the upper part of the black circles, we'll see that their curves (the wave crests) concentrate near their intersections due to becoming straighter. This effectively means that our constructive interference now happens not only at the points of intersection, but also in their neighborhoods. 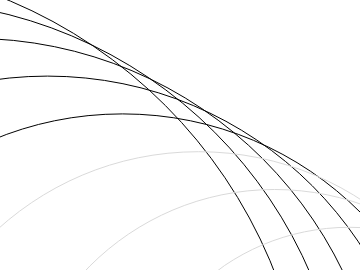 When the circles expand out much more, you can see that they, due to concentrating, form a nearly solid line. 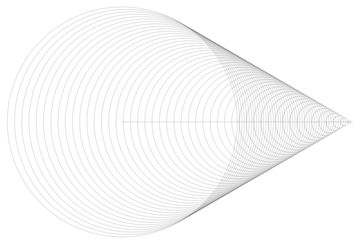 In 3D, this corresponds to the spheres of wave crests expanding out to form a solid cone. This solid cone is the very shock wave that one can hear as the sonic boom.

For speeds higher than speed of sound, when the waves spread out in the molecular mesh of the medium and if the object follows a straight path, they become cone-like because they spread out slower than the object moves to create new sources of waves. It is at the edge of this cone that the listener will perceive a big crash of sound.

Not the answer you're looking for? Browse other questions tagged waves acoustics interference doppler-effect shock-waves or ask your own question.

11
What Exactly is a Shock Wave?
8
What are the properties of a sonic shock wave?
6
Non-linear waves and shock formation