The matrix elements of the momentum operator in position representation are:

I know that the momentum operator shouldn't be diagonal in position representation (otherwise solving for the eigenergies and eigenfunctions of most Hamiltonians would be trivial). I am obviously confused here. I need more than just yes/no answers to these questions. I need some explanation, or some intuition.

There is a heuristic way to look at this.

The Dirac delta function corresponds to a spike when its argument is zero. You can view it as the limit of a sequence of Gaussian functions whose areas are all one but whose width goes to zero. The derivative of a Gaussian function looks like this: 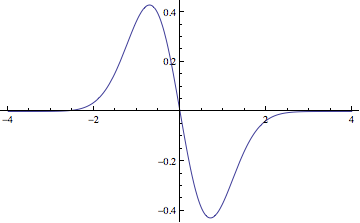 These kinds of heuristics can be useful, but they can also be dangerous, so don't take what I say too literally.

Update: Another way to look at this is to approach the derivative Dirac delta via a discretisation. If the wavefunction is represented by a vector of equally spaced samples, the derivative can be represented by central differences. Assuming periodic boundary conditions we get a matrix like:

We have 1's just above the diagonal and -1's just below. As the discretisation gets finer we get a matrix where they entries are more and more concentrated near the diagonal even though all of the non-zero terms are actually off-diagonal. In the limit you can again imagine something that is infinitesimally off-diagonal.

The above apparent paradoxes are rooted in wrongly thinking of a distribution, say $\delta(x)$, as a function from $\mathbb{R}$ to $[0,\infty]$ (which takes the value $\infty$ at the point $x=0$). This is an insufficient picture. Distributions should either be understood as a suitable limit of ordinary functions, or defined with the help of test functions.

In addition to Qmechanic's answer, this is what happens when you integrate over $x$ with a test function, which is actually what you need to do for the expression to really become meaningful. So let's use $f(x)$ as a test function$^1$ and integrate:

So in general this is not zero.

From Dirac, for continuous eigenvalues:

4) A general diagonal matrix is defined to be one that commutes with the generalized matrix of item 2) (again analogously with the discrete case.)

This relation is satisfied when: $$\langle \xi' | \omega | \xi'' \rangle = c' \delta ( \xi' - \xi'') $$ by the basic definition of the $\delta$ function, but it is not satisfied by the momentum matrix elements. Therefore the momentum is not diagonal (which you already knew).

Not the answer you're looking for? Browse other questions tagged quantum-mechanics operators momentum dirac-delta-distributions or ask your own question.