Now if the waves arrive at C in phase, they will reinforce; if they arrive one-half wavelength out of phase, they will cancel. In determining the phase relationship at C we must take into account the index of the material through which the light has traveled and also the phase change which occurs on reflection. This phase change occurs when light traveling through a low-index medium is reflected from the surface of a high-index medium; the phase is then abruptly changed by 180$^\circ$, or one-half wavelength. No phase change occurs when the indices are encountered in reverse order. Thus with the relative indices as indicated in Fig. 1.14, there is a phase change at C for the light following the A$^\prime$CD path, but no phase change at B for the light reflected from the lower surface. 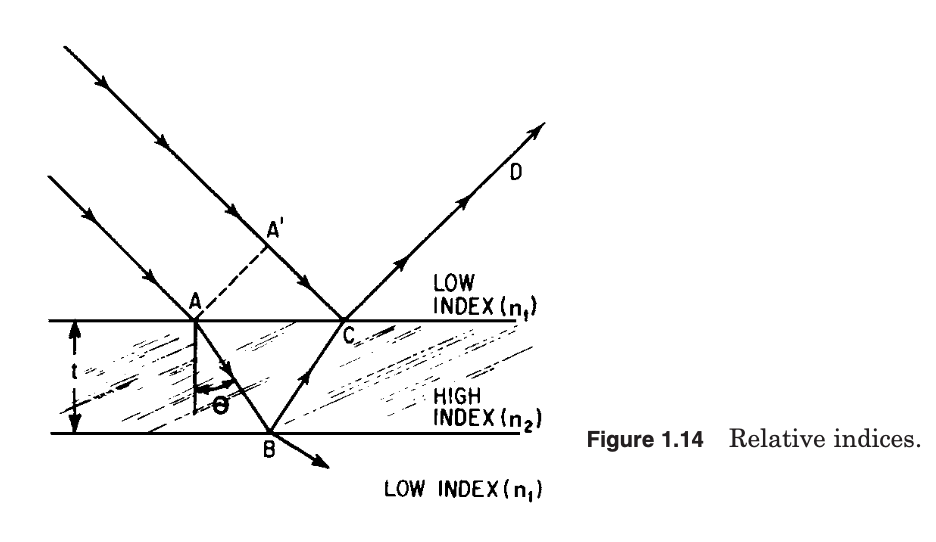 As in the case of Young’s experiment described above, the difference between the optical paths ABC and A$^\prime$C determines the phase relationship. Since the index of refraction is inversely related to the velocity of light in a medium, it is apparent that the length of time a wave front takes to travel through a thickness $d$ of a material of index $n$ is given by $t = nd/c$ (where $c \approx 3 \times 10^{10} \ \text{cm/s} = \text{velocity of light}$). The constant frequency of electromagnetic radiation is given by $c/\lambda$, so that the number of cycles which take place during the time $t = nd/c$ is given by $(c/\lambda) \cdot (nd/c)$ or $nd/\lambda$. Thus, if the number of cycles is the same, or differs by an integral number of cycles, over the two paths of light traversed, the two beams of light will arrive at the same phase.
In Fig. 1.14, the number of cycles for the path $A^\prime C$ is given by $\dfrac{1}{2} + n_1 \dfrac{A^\prime C}{\lambda}$ (the one-half cycle is for the reflection phase change) and for the path $ABC$ by $n_2 \dfrac{ABC}{\lambda}$; if these numbers differ by an integer, the waves will reinforce; if they differ by an integer plus one-half, they will cancel.

As you can see, for the path $A^\prime C$, the equation for the number of cycles is given by $\dfrac{1}{2} + n_1 \dfrac{A^\prime C}{\lambda}$, where the thickness $d = A^\prime C$. What I don't understand is why it is said that the "thickness" is $A^\prime C$? What I mean is that, If we look at figure 1.14, we can see that that particular ray has constant medium until it reaches $C$ (that is, there is no change in medium for the ray from $A^\prime$ to $C$) so how does it make sense to treat this part of the ray as if there exists some medium with a "thickness"?

I would greatly appreciate it if people would please take the time to carefully explain this.

I don't see the exact part in the passage above (and the formatting is a bit odd), but yes it is relating the phase change over a distance/thickness in a particular medium.

The scenario is assuming that the waves arriving at both $A$ and $A'$ are in phase.

If phase change for $ABC$ is equal to the phase change for $A'C$, then the light will converge in phase. So the change is must be calculated over both paths and compared. We don't care about the path prior to $A$ and $A'$ because they are assumed to be equidistant and constant index.

Not the answer you're looking for? Browse other questions tagged optics waves geometric-optics interference diffraction or ask your own question.

1
Difference between thin film interference and Bragg diffraction of electron
2
Why does in the definition of 'optical path', only spatial phase change is taken into consideration & not that of time?
1
Does the ray transfer matrix for a gap change, based on the index of refraction of the medium?
1
Interference in diffraction gratings
0
If the number of cycles is the same, or differs by an integral number of cycles, then the two beams of light will arrive at the same phase
1
Why doesn't the logic behind destructive points in single slit diffraction apply to double slits?
1
How do I know the signs that I should put when calc the interference?
0
Refraction across two interfaces: Snell's laws for a light ray and the law of sines for a triangle