Suppose I have some cart moving horizontally in a straight line and with a constant velocity, and there is no friction between the surface and the cart. Now, I throw a plasticine on the cart at some angle with the path (not right angle). 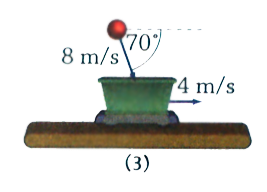 The net momentum before the hit was at some angle with the path. After the hit it changed its direction to the direction of the moving cart. So the momentum is not preserved in this case which means there is some external impulse acting on the system which alters the direction of the net momentum as described before. Now, this impulse must be canceling out the vertical component of the net momentum before the collision. Therefore its direction must be upwards. Now, I'm told that this happens because of the normal force acting on the cart: before the collision it was "canceling out" the gravitation, which made equilibrium in the vertical axis possible, but during the collision it has grown so the net force has become some non-zero value at that direction, and it was the source of the impulse which "canceled out" the vertical component of the net momentum. My question is - how could it be? Is it because the plasticine, during this short period of time of the collision is pushing harder and harder the cart, so it pushes the ground and the ground pushes the cart with the same force (according to Newton's third law), but somehow the gravitation is not still balancing the normal force, maybe because the cart and the plasticine can't be considered one uniform object at that short period of time?

And another related question - in the example described above, how can I tell whether the speed of the cart will increase or decrease (no values, just that) after the collision, knowing the angle, and using only Newton's laws (no momentum considerations)?

You are right - the net normal force was non-zero at some point during the collision. This is a consequence of Newton's Second Law.

The standard concept of normal force = gravitational force only applies in situations where the system is not accelerating and $F = 0$. However, during the collision, the clay-cart system accelerates up. The situation is similar to the case of a scale in an elevator. As the elevator accelerates up or down, the overall force measured by the scale will change due to the acceleration of the system.

Consider the motion of the center of mass in the x-y plane before the collision, and this will be conserved afterwards. For example, if a very heavy ball of clay car was thrown with a high velocity directly into the path of a very slowly oncoming small toy car, the car's speed would likely increase by changing its direction. The center of mass of the original system was moving left rapidly, and so the center of mass of the clay-car system will also move left rapidly. To justify this with Newton's Laws, use the fact that the net force on each object in the collision is equal.

3
Conservation of Momentum/Energy collision Problem
4
Conservation of momentum in collision of two bodies
6
The elusive difference between impulse and momentum
0
Newton's law for rigid bodies
0
How to calculate impulse force on collision?
1
What makes cart with a moving object in it gain speed (no friction anywhere)?