If a photon takes all possible paths, does it travel faster than light?

Let's assume we are in a perfect vacuum and let a photon travel from a point $A$ to a point $B$. As far as my understanding of quantum physics goes, the photon takes all possible paths between $A$ and $B$, as shown in this picture: 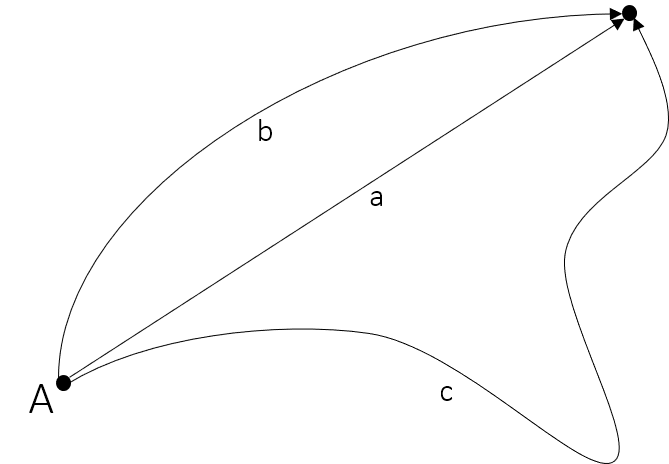 However, if I understand correctly, in quantum physics, a particle such as our photon travels along all paths at once. This means that it arrives at $B$ after $\frac{d(A,B)}{c}$ seconds, but somehow also travels paths which are longer than $d(A,B)$.

How is this possible without the particle travelling faster than light (which is not possible, according to special relativity)? I know that the photon does not "split up" or something like this (which maybe was implied by my question) and I am not very familiar with quantum physics, so I am convinced that this is just a misconception of mine.

As I am still in school, I would, if possible, prefer a non-mathematical answer; possibly an answer with both the concept and the math, so that it is also useful to more advanced users.

To be more precise, it sounds like what you're describing is the path integral formulation of quantum mechanics. Within this framework, every possible path between $A$ and $B$ contributes a complex number to an infinite sum, which is used to calculate the "actual" path the particle takes.

It is tempting at first to ask how a particle could take a path that in theory requires it to travel faster than light, and these paths are considered in this approach and do contribute to the sum, however the classical path the particle takes never requires it to travel faster than light. The paths further from the classical path effectively cancel each other out in the infinite sum. For a nice visual representation of this see here.

Saying that the particle does traverse all paths is doing something that "pop-physics" outlets often do: assume that exactly what happens in a mathematical model also happens in real life. This is analogous to "the fabric of spacetime is bent by mass and energy", it certainly allows people to visualise what's going on but it is an analogy that can only be taken so far.

A particle cannot travel faster than the speed of light in the sense that you cannot measure the particle to be in position $A$ and then subsequently measure the particle to be in position $B$ unless enough time has passed (so that $\frac{|B-A|}{\Delta t}\leq c$). This is actually not true in normal quantum mechanics, but it is true in Quantum Field Theory. All paths contribute to the Feynman path integral. However, the question of whether the particle is actually travelling faster than light along some of these paths is not well defined. We can measure the particle at one point, and then at another point. The paths that you get by connecting these observation points will never be faster than light. What happens between the observation points is not something you can see or measure.

Yes, within the Feynman integral approach the photon (and any other particle treated with this machinery) may travel with a velocity grater than $c$. (This is the intuitive corresponding of a virtual particle one uses in quantum field theory.)

However the path integral method cannot be taken too literally. Not everything one may imagine by looking at this representation from an intuitive point of view reflects the observable physical reality. It is a powerful mathematical procedure to compute probabilities of observable physical events.

Not the answer you're looking for? Browse other questions tagged photons quantum-electrodynamics path-integral faster-than-light virtual-particles or ask your own question.