The Leaning Tower of Pisa [closed]

Ask Question
Asked 1 month ago
Active 1 month ago
Viewed 76 times
1
$\begingroup$
Closed. This question is off-topic. It is not currently accepting answers. 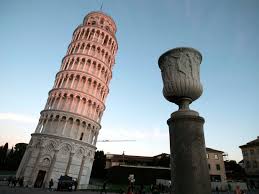 Can we calculate the time when the Tower will lean to the extreme point that its center of mass will be out of its balance...?

In theory would be possible, but to do it you'll need to know the precise position of the centre of mass of the tower, which if it was a homogeneous cylinder would be pretty easy, and the angular velocity at which the tower leans.

So, suppose that we know the position of the centre of mass, with which we can evaluate the maximum angle of lean before the tower falls, call it $\theta_M$. Moreover we know the angular velocity $\omega$ and we suppose that is constant, then $$\theta(t) = \omega t\implies \theta(t_M) = \theta_M = \omega t_M$$ and therefore we simpy have $$t_M = \frac{\theta_M}{\omega}$$

This is all well and good, but the real problem is to find the centre of mass and the angular velocity. The latter could be experimentally found just by measuring the angular position of the tower at least two times at two different moments, and so by interpolating with a simple line. This would imply that we're taking the angular velocity as constant over time, which won't be true since, due to gravity, the tower is slowly accelerating towards the ground. A better way of doing it would be taking lots more measurement at many different times and then finding a curve of best fit. This is a rigid body problem and can be solved using common techniques. If you find the angular acceleration $\alpha$ only due to gravity, then you'll need to solve a second order equation for $\theta_M$ $$\theta(t_M)\equiv \theta_M = \omega t_M + \frac{1}{2}\alpha t_M^2$$

All of this is done supposing that nobody prevents it to fall down, which is clearly not true.

The tower of Pisa started leaning because of uneven settling of the soil underneath it. (It could be that it wasn't just a process of compression, but that there was also reflow. I don't know the details.)

Decades ago it was discovered that this uneven settling was accelerating. That is, the lean wasn't increasing linear with time, it was speeding up.

Study after study was commissioned, but for many years city council after city council was not able to make a decision (I assume that italian city politics, like the national politics, is very volatile.)

At one point in time many hundreds of tons of giant lead ingots were stacked in a cilinder section around the base, to increase the weight at the high side, in the hope that would decelerate the rate of increasing lean. It worked partially only.

Finally the danger of collapse was so acute that the city council went ahead with a plan.

There are machines that can drill narrow bore holes at a sharp angle. Machines like that are used to create conduits underneath roads and so on, whithout need to tear up the road.

The concern, of course, was that that subsidence might occur in fits, rather than gradually.

To everyone's relief the plan was succesful. The progress of the lean came to a halt, and was even reversed a little.

Incidentally, there is the story of why the increase of the lean started accelerating.

What used to be the ground floor at the time of construction had sunk pretty deep in to the ground. It did not match the street level. At some point in time a huge amount of surrounding soil was removed to make that original ground floor accessible again. My understanding is that the removal of such a large amount of mass and ground pressure destabilized the foundations.

Not the answer you're looking for? Browse other questions tagged newtonian-gravity reference-frames estimation statics or ask your own question.

6
What properties do you need for building a tower?
4
Center of Gravity vs Center of Mass
0
Moment of weight of leaning beam
5
Does Galileo's Tower of Pisa argument contradict quantum mechanics?
5
Can very large objects have a gravitational moment?
7
Is it possible to remove the last block from a the lowest layer of a Jenga tower?
0
A question on Rolly polly dolls
3
Will an object dropped from a high building displace due to the Earth's rotation?
0
What is the age of planet Earth, if we are not looking for the age at sea level?