How much charge will flow to the earth?

Consider a thin spherical conducting shell of radius $R$, which carries a total charge $Q$ on its surface. Two point charges $Q$ and $2Q$ are at A and B respectively as shown in the figure ($C$ is the center of the shell). 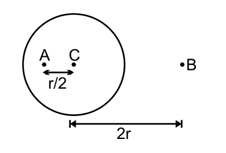 If now the shell is earthed. How much total charge will flow into the earth ?

The above equation results in $Q_1=-2Q$, which further implies that $4Q$ charge flowed from the shell to the earth.

But the answer given is $3Q$. This is contradicting the fact that $\vec{E}=0$ inside the shell, which I can't understand since in my opinion existence of an electric field inside the shell will result in the movement of the charge inside, causing instability in the overall configuration. Please clear any misconceptions you find in this solution.

Not the answer you're looking for? Browse other questions tagged homework-and-exercises electrostatics electric-fields conductors or ask your own question.

3
How are excess charges distributed over non-spherical conductors?
0
Force on the central charge
0
Force on a charge kept inside a Conducting hollow sphere
1
Electric field inside a non-conducting shell with a charge inside the cavity
0
Are the charges induced on the surface of an earthed conductor of the same?
2
Difference between grounding the inner and outer side of a thick spherical shell