Why is torque measured about the centre of mass? [duplicate]

Ask Question
Asked 9 months ago
Active 9 months ago
Viewed 2k times
6
$\begingroup$
This question already has answers here:
Why does a body always rotate about its center of mass? [duplicate] (11 answers)
Closed 9 months ago.

The original question I was asking was Why does a body not rotate if force is applied on the centre of mass?.

The obvious answer is that the torque ${\bf r}\times{\bf F}$ is zero as ${\bf f}$ is zero at the centre of mass, but that defeats the purpose of my question. Why is the centre of mass so special that we take torque about it and force applied on it does not provide rotation?

I am looking for the intuition behind this.

Okay so let me give you the intuition.

Now you would've heard of cases of a pendulum made of a rod instead of a string.

(You can checkout this: http://hyperphysics.phy-astr.gsu.edu/hbase/penrod.html)

Okay, so in this case you can clearly see that the torque is taken about the hinge. And you apply gravitational force at the centre of mass and take its torque about the end of the rod and the torque is non zero! Eureka! You have an answer.

I hope I have answered your question. Please feel free to comment if there is any doubt!

Why a body does not rotate if force is applied on the centre of mass?

The question is: Why does it rotate if it is not applied to the center of a mass?

First we look at two rules that students of mechanical engineering (I don't know about physics) learn at university:

In university, these two rules are used to prove that the formula of momentum ($M = r\times F$) is valid...

However, we can use the same methods used in that proof to prove that a body will rotate if the force is not applied to the center of gravity:

We do that for a very simple body because otherwise we would require integral calculation: We have a body like a dumbbell: Some bar that has nearly no mass in the middle but all mass is concentrated in the two endpoints. (Pos. 3 and 4 of my image)

We do some vector calculations (shown in my second drawing) to prove that one force applied to some point of the body has the same effect as two forces applied to the ends of the body (where the mass is).

However, if the single force is not applied to the center of the bar, the two forces do not have the same magnitude. (Pos. 4)

Because the forces have a different magnitude (but the masses are equal), the acceleration is different and therefore the velocity will be different after a short time.

If two points of a solid body move with a different velocity, this means that the solid body is rotating.

I am looking for intuition behind this.

Most intuitive would be applying a single force at one end of the bar...

Positions 1-4 in my answer: 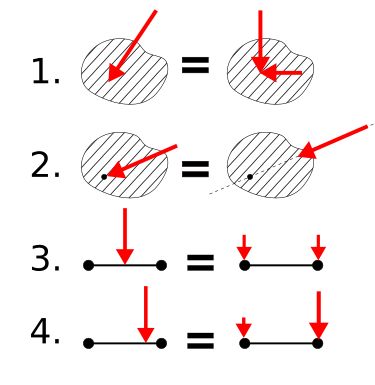 Vector operations required for the proof: 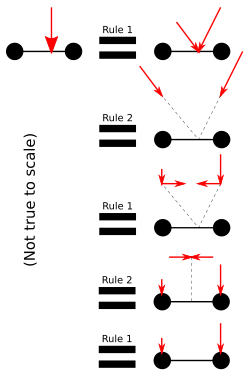 But what about the case when it isn't hinged at any point with the force still acting on the COM? A torque still acts about the axes other than that of the COM. Let me answer this question.

I hope this clear your doubt!

Other than the specified reasons in previous answers, the major reasons I choose to use the centre of mass frame of reference is because

So you can just see pure rotation and no bother of pseudo forces!

How could any other frame be more beautiful than that? (;p pardon special relativity fans)

If you replace a collection of particles with centre of mass you will end up having a point with same mass.

Now just try to imagine applying a force to the point . The moment you apply a force to it , if you are able to imagine , you will see the object can only translate .

This can be explained with a simple case - torque with zero net force.

Consider a rod in free space being acted upon by two equal and opposite forces at the ends. 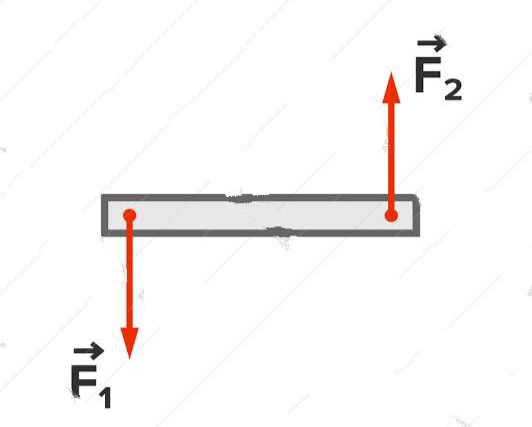 The subsequent motion of the rod is dictated by -

What it means is individual particles of rod must move without changing their relative positions (the rod is rigid) and also the COM of the rod must not accelerate (the net force is zero).

That leaves a single way - rotation about the COM.

Why does a body not rotate when a force is applied at the COM?

It's just like you apply a force on particle and it goes into rotation about some random point.

16
Why does an unhinged body rotate about its centre of mass?
2
Why isn't gravity included in this calculation for torque?
0
Confusion about torque and net force
2
Definition of torque in the (possibly accelerating) centre of mass frame