How does a Michelson interferometer work?

First off, a Michelson interferometer does work. It can measure tiny length differences. Here is a video showing one in action.

I must have misunderstood how it works. Here's what I think is happening:

The light beam is split in two. The different paths may be different lengths. They are then recombined, and so they may interfere. 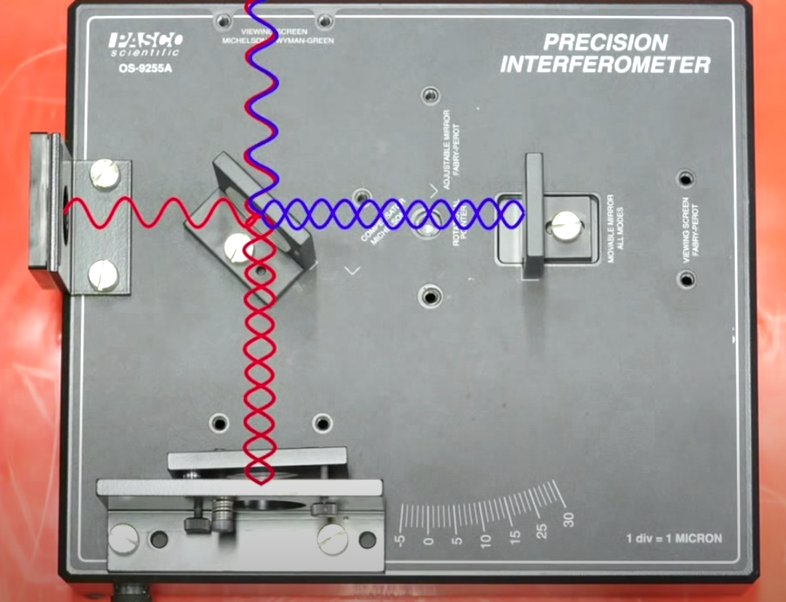 To see the interference, the light goes through a pinhole that is multiple wavelengths wide. The light spreads out in all directions, and when it hits a flat wall anywhere but the center, the light that went through different parts of the hole will have traveled different distances. So it interferes.

Since the wavelength is the same for the two beams that were split and have come together, each of them cancels with itself at that spot. Also at the spot where the total difference is two wavelengths, and three wavelengths, etc. So those rings will always be dark. But the places where the light constructively interferes, the two beams may cancel there, or complement each other. So we can tell about tiny differences in length by how bright the unmoving bright circles are.

But that isn't what actually happens! In the video, when one mirror is moved a little, the rings actually move! They don't just get brighter or darker, they stay the same brightness but move outward, or back in.

So my understanding is somehow wrong.

What is really going on here?

With the single pinhole or slit, I expect to get the exact same interference pattern from both beams. The big difference I see from having only one beam is that when two beams interfere the right amount we should see an interference pattern when the slit is less than one wavelength wide, but with other amounts of interference that would not be visible.

Without the pinhole or slit, the interference pattern depends on some subtle misalignment of the beams. I'm fascinated at the idea that when the lengths are equal there is no interference, and at every other pair of distances there is. @Farcher provided a link to a simulation which demonstrated this.

I'm still confused, but now I know where I went wrong, and I have an idea where to look.

So we can tell about tiny differences in length by how bright the unmoving bright circles are.

Yes, typically for simple toy models of a Michelson interferometer we assume the wavefront of the beam entering the device is flat (basically a plan wave, or in practice a Gaussian beam with a relatively large waist. We also assume there is no angular misalignment. In this case, as you point out in your edit, there is no spatial interference pattern.

This is an important feature of interference patterns, it is some sinusoidal signal which arises due to the superposition of two things, but the horizontal axis for this sinusoid can be many different things, it can be space, in which case we might see fringes just by looking, it might be time in which a signal oscillates, or it might be some other parameter such as path length difference.

I think I understand now, partly from the explanations here

There is no pinhole or slit required. The interference pattern comes from two light beams that travel different distances and therefore are out of phase.

The laser beam is not perfectly collimated. It spreads out from a small source. So if the distance over the whole path is not the same for the two beams, the farther from the center the longer both beams will be and ALSO the bigger the difference between them. So the interference will be different and we will see concentric circles.

If the length of the two beams is the same, then it will still be a longer path away from the center, but it will be the same longer path and the same interference.

But you could still see an interference pattern even then, if one or both of the mirrors is curved, or if the beam-splitter is curved, etc.

The interference pattern can look roughly linear if the mirrors are slightly tilted.

Not the answer you're looking for? Browse other questions tagged visible-light electromagnetic-radiation interference interferometry or ask your own question.