Are resistors, inductors, capacitors the only possible passive components in this universe?

Are resistors, inductors, capacitors the only possible passive components in this universe? Is there a possibility to find another one?

From a mechanical point of view, I can rephrase the question into the equivalent mechanical question:

Are dampers, springs and masses the only possible mechanical components in this universe?

Capacitors couple charge and voltage, with the constitutive relationship $Q=CV$ (With similar extensions to the nonlinear case as for the resistor).

Inductors couple current and magnetic flux, with the constitutive relationship $\Phi=LI$ (again, with extensions for the nonlinear case).

Current and charge are in some sense inherently related (you don't need a component to give them a relationship). We express their relationship by $I=\frac{dQ}{dt}$ or $Q=\int I\ dt$.

As the duals of current and charge, voltage and flux are also inherently related. We express their relationship as $V=\frac{d\Phi}{dt}$ or $\Phi = \int V\ dt$.

That means there's one combination of circuit variables that aren't coupled by one of our traditional circuit elements: charge and flux.

To fill in this gap in circuit theory, in 1971 Leon Chua proposed the definition of an additional circuit element, the memristor that can couple charge and flux. The memristor has the constitutive relationship $\Phi = M Q$.

The relationships between the circuit variables, how they're coupled by the various circuit elements, and the memristor's place in filling out the possible couplings is shown in this diagram: 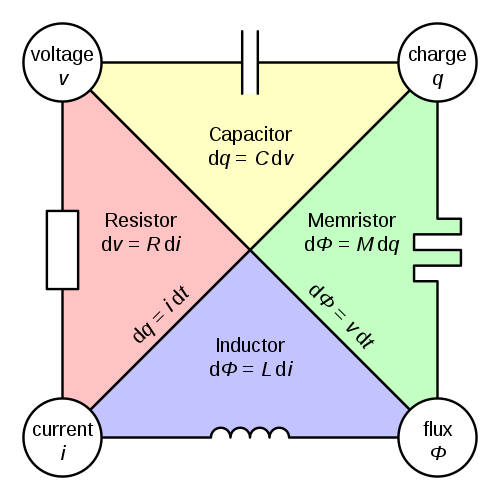 (The diagram shows the circuit variables as differentials, since we often want to analyze perturbations of the operating point of a nonlinear circuit, rather than truly linear circuits that follow the linear relationships I used above for simplicity)

Since Chua's proposal, analog models of memristors have been constructed using op-amps, and a few reasonably simple physical systems have been found that act memristively, but there is still not any simple, passive, physical memristor you can buy at Digikey or Mouser, and the device remains mostly (but not entirely) a theoretical curiosity.

Look at it this way: what possible forces can be applied to an electric current in a constrained environment, e.g. a wire? Or, more specifically, to the value of the voltage at any location along the wire. About all you can do is apply a lead, a lag, or an attenuation (and all of those as a function of $\omega$ ) .
Since physical components can be modeled as combinations of ideal R,L and C elements, unless you can demonstrate a different action which can be taken to modify V(t), there's no need for a new kind of component (passive).

Not the answer you're looking for? Browse other questions tagged electric-circuits electrical-resistance capacitance inductance electronics or ask your own question.

1
Would magnetic flux be necessary for analogous systems?
5
How uniquely determined is the impedance of an infinite-chain circuit?
9
Are capacitors and inductors mirror images of each other?
0
What is the physical interpretation of inductors and capacitors equations in Frequency(s) domain?
0
Currents in circuits
0
Why are resistors useful?
2
How do capacitor plates maintain equal but opposite charges in a circuit?
1
Outside the lumped circuit model, is it possible to define voltage satisfying the known relations for inductors, capacitors and resistors?