Is there a relation between the domains in broken (but not shattered) tempered glas and the amorphous structure of glass?

When a thick plate of glass is hit (strong enough) by an object (say a shoe, by which I don't like to encourage vandalism, but I think that's happened when I saw the glass plate at a train station). This gave rise to the following structure of the plate (more or less; I didn't take a photo) and what I saw resembled the second picture (of the atomic strcture of glas) to some extent, in which one can see the same kind of domains too: 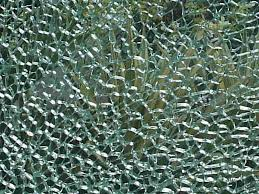 When I moved my fingers over the surface I couldn't tell the difference between a smooth glass plate and the one with the domain structure. The domains extended from one side of the plate to the other without changing their form noticeably. I thought that if you pushed hard enough the smooth glass plate would shatter apart in all the individual domain pieces.

Atomic Structure of Glass: Glass has an amorphous structure. It means that it is made up of a long chain of atoms. ... The chemical structure of silicate glass (ordinary window glass) is an amorphous 3D network of Si-O-Si-O bonds, which are interrupted in places with metal ions (like Al Ca Na). 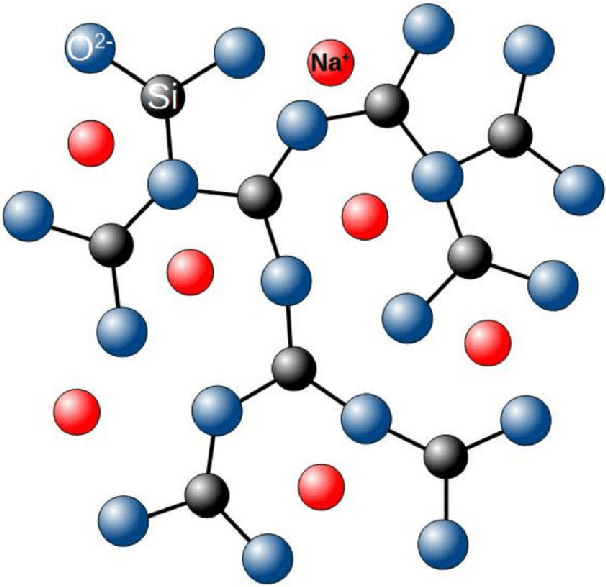 The domains in the first picture are surrounded by lines where the glass bonds are broken. As I said, you can't feel these lines on the outside. The broken glass seems perfectly smooth. It's maybe because my fingers are not sensitive enough. I don't know.
It's also striking that the domain walls reach from one side of the glass almost perpendicular to the outside.

Can the observed domain pattern in a smooth (tempered but not safety) glass plate, as far as I could feel, be explained by the atomic structure given above? And what about the domains penetrating the entire depth of the glass?

Because the nanostructure of glass like this has no long-range order, there's nothing intrinsically present in it which would drive the formation of macroscale domains.

The "domains" you see here are the result of manufacturing the glass with residual compressive stresses built into its surface. This causes the glass to fragment into blunt fragments instead of slender knife-like shards, reducing the chance of injury if the object striking the glass sheet happens to be your head. This is called "tempered glass" and is what sliding glass doors and shower enclosure doors are made of. It is also common for large glass windows in public places to be made from tempered glass too.

The chunky structure comes about because as the glass is breaking, the stresses get relieved in such a manner as to steer the cracks towards one another rather than apart, forming chunks with blunt edges rather than daggers with sharp points. The thickness of the sheet and the degree of tempering set the chunk scale.

The reason you can't feel the cracks in that sheet of broken glass may be because it is coated with a thin layer of clear plastic. This further increases safety by preventing the broken glass shards from being sent flying like daggers when the glass is broken. Usually the plastic layer is sandwiched in between two sheets of tempered glass. Glass with plastic in it is called "safety glass" and tempered safety glass contains both features. It is most commonly used in automobile windshields and side windows.

Not the answer you're looking for? Browse other questions tagged glass amorphous-solids or ask your own question.

1
Why polymeric solids are said to be intermediate between crystalline solids and amorphous solids?
0
what is the intensity of photon before and after striking the glass prism?
10
Why iron sparks damage the glass surface but do not harm leather apron?
1
Why does molten sand cool to form glass and not return to it's original yellow form?
0
Why was the glass broken in the Lobby but not above the impact zone? - 9/11
17
Why does pepper not stick to the glass with print inside my pepper shaker?