How does energy flow in a circuit? Which is correct?

There are two perspectives I have come across for how energy flows in a circuit:

I have seen both of these explanations given by various sources.

The 2nd explanation is the one that I see the most often, but the notes on Electricity Misconceptions convincingly put forth the 1st explanation. However, what I am struggling to understand is how this electromagnetic field generated by the current actually leads to energy being transferred in the circuit - how the field leads to bulb glowing.

Or perhaps both explanations work together, but I can't see the whole picture.

This is a fantastic question, that indeed has a fantastic answer. I would like to answer your question by answering 3 other apparently disconnected questions, but then we'll connect them that will finally lead to your answer.

Assume 2 individually positive charges are moving perpendicular to each other as shown in the figure. 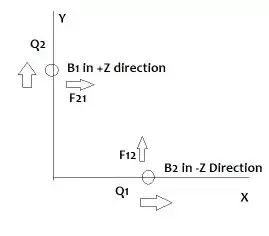 One of the charges is moving along the x-axis, while the other moves along the y-axis.

Now, due to their motion, they create a magnetic field according to the right hand rule. So, the magnetic field lines created by one charge will affect the other and vice-versa. If you calculate the magnetic forces acting on each charge, you will find that they are equal in magnitude but NOT opposite in direction, as shown in the figure.

Well you see, the magnetic force that we observe is a result of velocity (or motion) of the charges in a magnetic field. So, this force is due to the rate of change of "mechanical" momentum of the particle, i.e., momentum due to mass and motion.

But hold on, aren't all kinds of momentum due to motion and mass only? Don't we know it directly from $\mathbf{p} = m\mathbf{v}$?

Yes, but not always. Turns out, that not all momentum are due to motion and mass. There also exists all different sorts of momentum. One is due the momentum that is carried by the Electromagnetic field itself. (For a point charge Q in EM field, this momentum carried by the fields = $Q\mathbf{A}$, where $\mathbf{A}$ is the vector potential)

So, Newton's 3rd Law is actually not violated, since total momentum (Mechanical + EM field momentum) is actually conserved. Only that mechanical momentum is separately not conserved, hence the apparent violation.

Okay, but so what? Hold on to this answer we'll need it.

Question 2:- What is the significance of the Poynting Vector, and how is it connected to your 1st Explanation?

For completeness, I am showing a small derivation of the Poynting Vector. If it's difficult to understand, simply skip it. There would not be any difficulty in continuing with the flow.

Thus, the work done on charges per unit time equals the energy decreased in the fields minus the energy that left the surface 'a'.

The Poynting Vector is given as $\frac{1}{\mu_0} (\mathbf{E\times B})$, and it signifies the energy that leaves per unit area of a surface per unit time.

Let's calculate the magnitude and direction of the vector for a wire with uniform current I flowing through it, as shown. 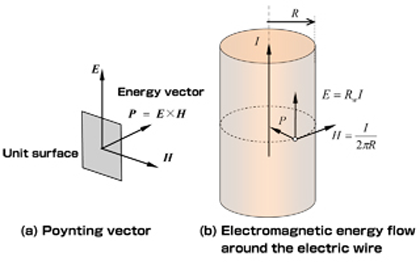 The cross product therefore always points perpendicular to the surface inwards. The magnitude of $\oint\frac{1}{\mu_0} (\mathbf{E\times B})\cdot d\mathbf{a}$ surprisingly yields $VI$, which is indeed the power consumed by a wire having uniform current flow.

Thus, we find that some sort of energy is flowing into the wires. But from where?

Now look at this diagram. 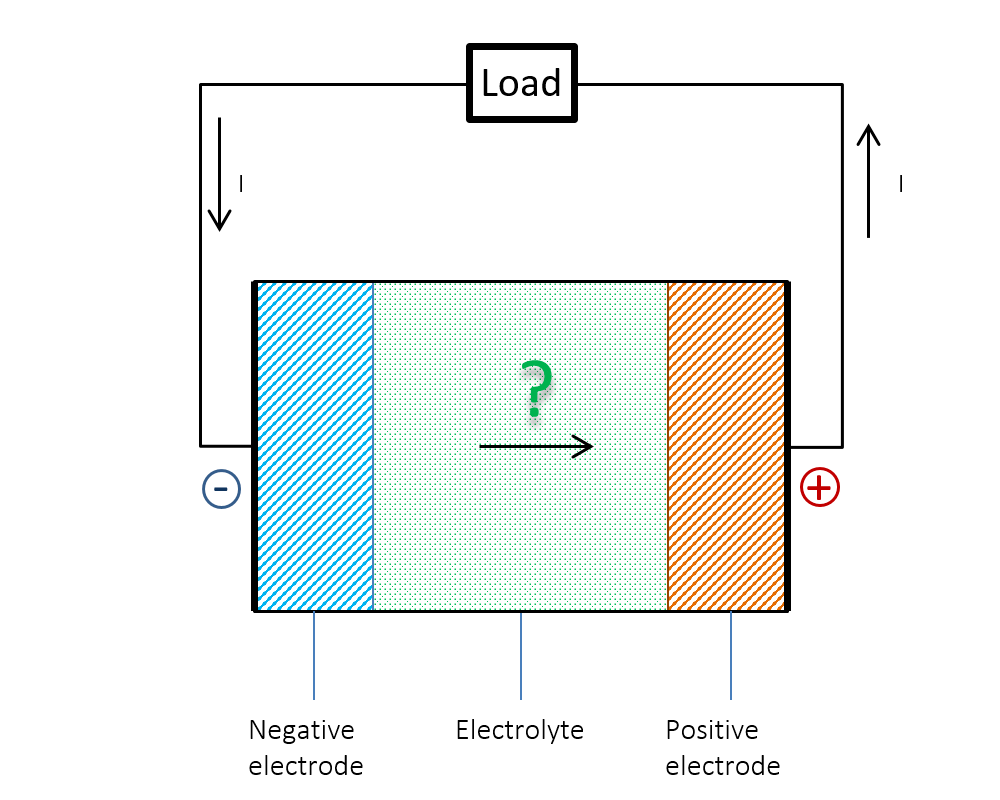 The current in a circuit always flows in the same direction, inside as well as outside a battery. So, the magnetic field lines always remain the same. However, the electric field inside the battery must reverse its direction, as shown (ignore the writings). 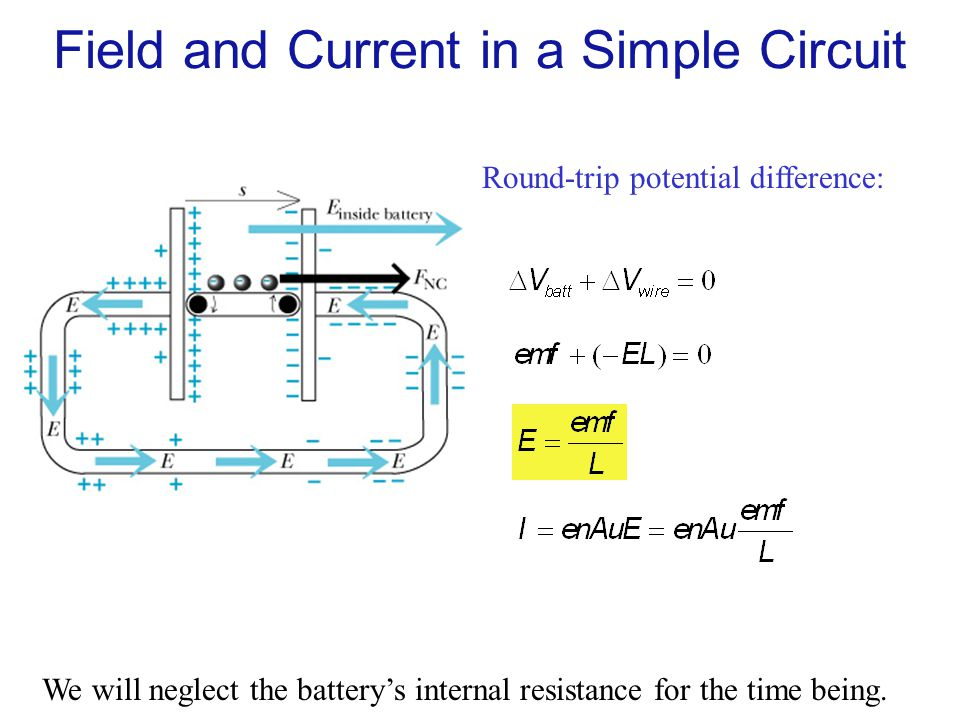 So, the Poynting Vector must remain the same in magnitude but change its direction, now pointing perpendicular outwards from the surface of the battery.

Aaah, there we are finally! Energy transfer thus takes place in the following manner:

The process is illustrated in the GIF below.

I hope this answers your 1st Explanation.

Last Question:- The Joule Heating produced due to the power consumption of the wires is no where to be seen in Explanation 1. So how to explain Joule Heating? Also, in order for the magnetic field to exist throughout the wire, the current needs to flow throughout the circuit. How does the current starts flowing in the distant parts of the circuit?

Here is where, your Explanation 2 comes into play. You see, recall what we had discussed in Question 1. The total momentum is due to Mechanical + EM Field momentum. But as of now, we have only discussed the flow of energy due to EM Fields, which carry their field momentum. We are still left with our Mechanical momentum.

As you know, mechanical momentum is due to mass and motion, so physical motion is absolutely needed for this transfer. However, what happens is that, there are so many electrons in a circuit, that a single particle cannot travel much further, without "colliding" with it's neighboring electrons or the fixed atoms. Thus, all the energy that individual electrons carry gets converted into the kinetic energy of the atoms and electrons leading to Joule heating up of the wires. Also, this collision with each other provides the "push" needed to set up the current throughout the circuit.

Explanation 1 does take place and it explains the way Electro-Magnetic Energy flows from the source to the wires and bulbs.

Explanation 2 does take place and explains the Joule Heating and the Mechanical part of the momentum carried by individual particles, and how the current is set up in the entire circuit so as to allow the transfer of energy via Electromagnetic Energy.

The second statement is somewhat true, but only because it hides facts that are laid out in the first statement. For example, what does it mean for two electrons to collide? They are not like billiard balls that bounce off of one another. In fact their "collision" (or more appropriately, scattering) is mediated by the electric field. The "bounce" that happens when two incoming electrons "hit" each other is due to increasing potential energy stored in the electric field, which repels them.

The second statement implies that electrons behave like a newton's cradle, where an incoming electron "hits" a row of electrons in the wire, and that impulse is carried until the last electron, shooting it outwards. In reality, as statement 1 says, this effect is really not a collision, but from the electric field itself.

The part of EM theory that describes energy flow is called Poynting’s theorem. It says that energy in the EM fields moves from one place to another in a direction that is perpendicular to both the E field and the B field.

Notice that the bulb glowing is not directly about energy flow so much as energy transfer between the fields and matter. This is governed by a different term in Poynting’s theorem. It is determined by the amount of current that goes in the direction of the E field. In the filament there is a strong E field inside the filament and a large current through the filament, so a lot of energy is transferred to the matter.

Not the answer you're looking for? Browse other questions tagged electromagnetism electric-circuits electric-fields or ask your own question.

8
Why does electricity need wires to flow?
8
How electron movement produces current,instead of having a slow drift speed
2
How electrical energy is transfered trhough a wire, and what's flow of charge?
7
Path of EM wave propagation in a circuit wire
3
Do electrons coming out of a lightbulb (and going back into the circuit) slow down?
3
Electric potential and drift speed of electrons through circuit
1
What is the microscopic explanation for why is there more power in a circuit with a smaller resistance?