It is well-known, that in $\phi^4$ theory in 3d there is interaction fixed point:

But this analysis is possible only in vicinity of Gaussian fixed point.

Is the WF point unique? Or in strong coupling limit there are some other points? 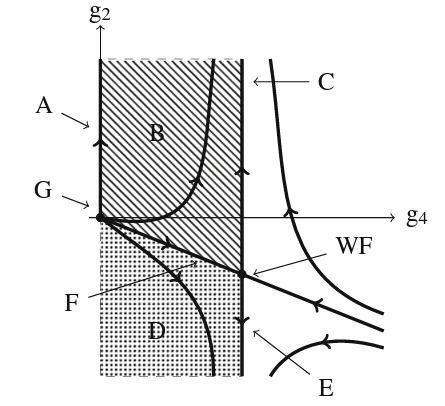 As usual in interacting field theory, there is no rigorous answer to your question directly in three dimensions. However, there is strong numerical evidence from the conformal bootstrap approach for the uniqueness of the Gaussian + Wilson-Fisher fixed points as the only two fixed points with conformal symmetry in your theory. In the paper https://arxiv.org/abs/1406.4858, very convincing numerical evidence was found that

...the 3D Ising CFT is the only $\mathbb{Z}_2$-symmetric CFT in 3 dimensions with exactly two relevant operators.

The emphasis is theirs. Before delving into what this means, I'll first say that there is no proof that all scale-invariant scalar field theories also have conformal symmetry in three dimensions, so the possibility of fixed points without conformal symmetry is not addressed by this approach. I'm not personally aware of a three-dimensional scale-invariant scalar field theory which is not thought to also be conformal. (Once again though, we can't prove anything exactly. There is actually no proof that the critical Ising model is conformal even though everybody believes that it is.)

Now let's apply the above quoted comment. First of all, we can solve your model exactly at $\tilde{g}_0 = 0$ (the only exception to my statements above about exact proofs). The only fixed point is the conformally-invariant point at $\mu_0^2 = 0$. I can enumerate more than two relevant primary operators here, viz: $\phi^n$ for $n < 6$ (the case $n = 6$ happens to be marginally irrelevant), so the above "theorem" does not apply.

(1) At the resulting fixed point, the operator $\phi^4$ is still relevant, meaning that if we tune $\tilde{g}_0$ infinitesimally, the theory flows away from the fixed point. In this case, once again, we have more than two relevant operators, and we cannot conclude anything.

(2) At the resulting fixed point, the operator $\phi^4$ is irrelevant. In this case, there are only two independent relevant operators, $\phi$ and $\phi^2$. (Note that the addition of a term $\gamma \phi^3$ is equivalent to adding a linear term after the trivial field redefinition $\phi \rightarrow \phi - \gamma/4\Lambda\tilde{g}_0$). Then taking the above statement as truth, this must be the Ising CFT.

I'd like to think of an argument to eliminate scenario (1), since my intuition tells my such a theory likely doesn't exist. But can't think of such an argument at the moment. I will edit if I figure out a way to do so.

To summarize, taking the conformal bootstrap numerics as fact, we have three possibilities. Any fixed point which appears in your theory which is not the Gaussian or Ising fixed points either does not have conformal symmetry, or it requires one to fine-tune both $\mu_0^2$ and $\tilde{g}_0$. So at the very least, it implies that the Ising CFT is the only stable fixed point with conformal symmetry.

Not the answer you're looking for? Browse other questions tagged quantum-field-theory condensed-matter renormalization critical-phenomena or ask your own question.

6
How can you make mechanics invariant under inversion of length?