So you are holding a thin horizontal rod (which is not bendable) which is fairly heavy and there is a heavy object (lets say a bag full of heavy stuffs) hanging from it.

So now if the bag is shifted towards the end at which you are holding the rod, it seems that we are putting the same amount of force in the upward direction as the rod-bag system is putting in the downward direction.

But here comes the catch: When the bag is shifted to the opposite end, opposite to which we are holding the rod, it feels like more force is needed in the upward direction to keep the forces on the rods balanced.

The bag is applying a torque (denoted by $N$). Which has the expression $\vec N=\vec r\times \vec F$, 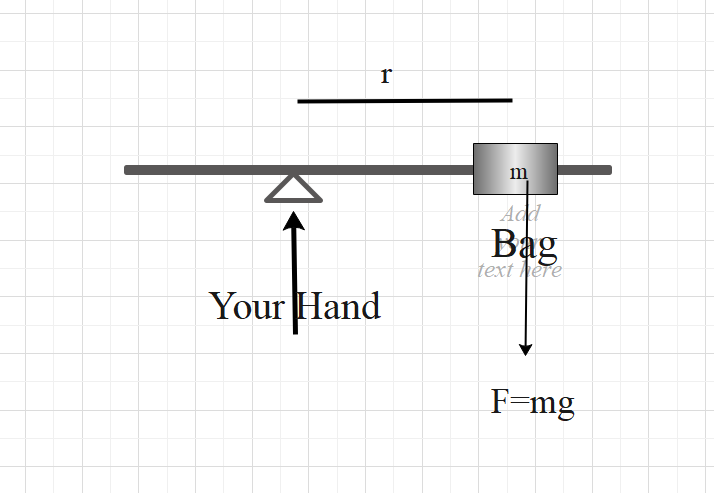 Now as $r$ increases $N$ also increases. So you will have to apply a higher torque for the same amount of force $F=mg$ ($m$ being mass of the bag).

So the force acting on the bag is same but it is the torque which is increasing. So no violation is coming.

What you are feeling is not an additional force, but rather an additional torque. The net force is the same in both circumstances, but the torque that you have to exert is substantially higher in the second case.

When you exert a torque you are essentially fighting yourself, one force counteracts another force in an opposite direction at a different location. If you pay attention, you will see that you are putting large forces on the top of the rod also. Thus you are applying a large force on the top of the rod and your force on the bottom of the rod has to counteract both the weight of the object and also your own downward force.

So it isn't that the object is heavier or that any more net force is being applied, but producing the large torque requires a lot more effort as you essentially fight yourself by exerting forces both on the top and the bottom of the rod.

Ever wonder why you cannot hold up an offset weight by just a simple equal and opposite force? Even you you supply an upwards force $W$, to counter-act the weight $W$, the system isn't stable.

The reason is the you need an additional downwards force on the back to counter the torque generated by the offset weight. 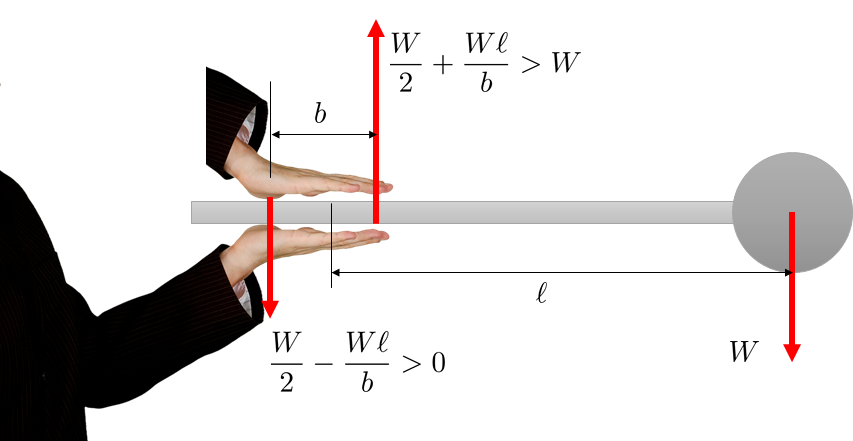 The upwards force needs to be greater than $W$ as seen above, and that additional amounts needs to be applied downwards behind the support force. The net result is

The net force that the person holding the rod is exerting on the bag is the same. In the second case he unfortunately is exerting this force through a torque on the rod, which requires large opposing forces applied to close points on the rod.

If I have understood your question correctly, you're asking why it's easier to hold up an arrangement like (a) than it is (b) 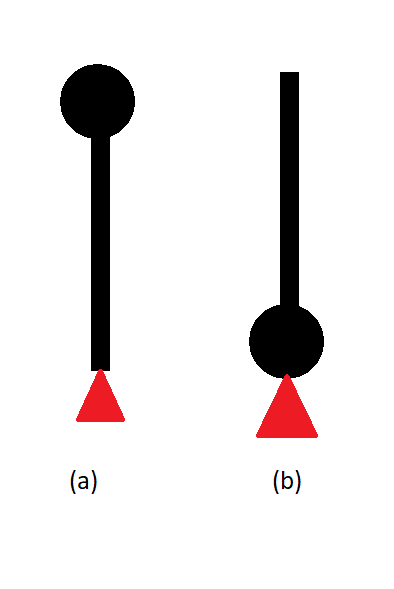 That's because when you're holding it up, it's never perfectly vertical. You're counteracting not only the force due to gravity, but also the moment because the center of mass is not at the support.

In case (a), the center of mass (green circle) is further away from the support and therefore causes a larger moment about the support (red triangle) than in case (b) 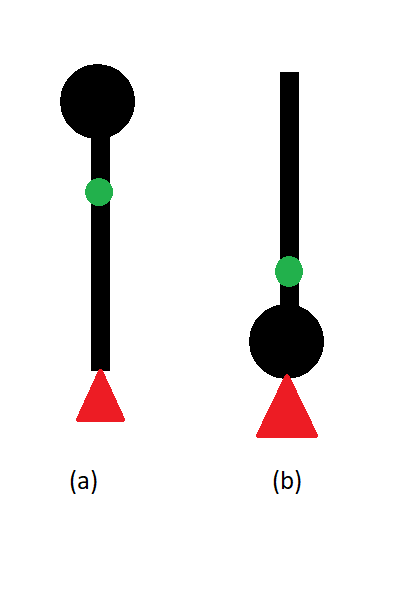 Note that, when we speak about Newton's laws at a basic level, we treat all masses as point masses, hence we do not consider the rotational effects caused on the body.

In this case, it is an extended object, hence we have to consider the rotational aspect of the body when force is applied. What happens here is as the weight is taken away from the point where you are holding, another physical quantity called torque increases.. for a basic view, as force causes acceleration, torque causes angular acceleration and is directly proportional to distance from the point about which it rotates.

Since the rod about which we speak is not fixed at any point, it rotates about its center of mass, now if u apply exactly enough force to carry the weight of the bag, the system will NOT accelerate, but will will start rotating for infinitely small period of time but as the rod rotates, the weight of the bag starts to act at an angle to the rod as it rotates, which breaks the equilibrium, but if we assume that we take the rod to space, and instead of gravity/weight of a body, we take two rocket engines and attach them to a rod such that they apply same amount of force in opposite directions in the rod, we find that the center of mass of rod does not accelerate, but the rod may rotate due to the imbalanced torques.

So if you have a long stick a small deviation in the angle in combination with a long stick will result in a bigger displacement of $y$ than if the length of the stick was smaller. So if the stick is long the potential energy of the weight gets smaller that if the stick was short (same angle).
This means you have to use the more energy ($E={F_{vert}}y$) to keep the stick horizontal the longer the stick is.
The situation in which you hold a stick with your hands is not a steady-state equilibrium (contrary to a stick attached to a wall or hold put by some other mechanism). Your arm muscles contract, relax, contract, etc. The stick moves a little bit up, a little bit down, and on the average moves not at all. When the weight at the end of the stick moves a little up or down your muscles must keep the weight as steady as possible. Which, as said, costs the more energy the longer the stick is, because the longer the stick, the more the weight will move down (same little angle), thereby reducing its potential energy (as I wrote $E={F_{vert}}y$), so your muscles must constantly compensate to keep the stick vertical. Seems pretty tiring to me.
You can compare it with a heavy object keeping up in your hand. It seems no energy is spent because the object stays put, but your muscles do spent a lot of energy to keep the object quasi-stationary. Keeping an object stationary with your hand or a stick with a heavy weight on its end doesn't make a conceptual difference except for the torques and forces (in the case of a quasi-stationary object held up by your hand).
Note also that the stick when the end with the weight moves a little by gravity, the force on your hand will increase the longer the stick (leverage).

Not the answer you're looking for? Browse other questions tagged newtonian-mechanics newtonian-gravity free-body-diagram or ask your own question.

3
Newton's third law of motion: An apple resting on the surface of earth
0
Newton's third law of motion, and the collapse of objects under heavier weight
0
Frictional forces and their directions
1
Where does the force go? In which direction does the normal force act?
2
Massless rods and normal forces in oppsite direction (Krotov Mechanics, 1.58)
1
Would the rod translate in this case, or only purely rotate?