What is the main reason for the locality of Einstein's equivalence principle?

However, the reason justifying this locality is that the gravitational field of any planet converges to the center of mass, and if we consider a freely falling compartment to be wide or high, tidal forces arise. These forces cause the balls released at two different heights (along the $g$-field) in the compartment to recede from each other and cause them to approach each other if released perpendicularly to the field.

However, what is upsetting here is the difference in the gravitational potential of the clocks located on the floor and ceiling of a high compartment. Indeed, even in case of a uniform $g$-field, the observer located on the floor of the freely falling compartment detects that the clock on the ceiling runs faster because it is in a less negative $g$-potential compared to his own clock. Therefore, the observer can distinguish if he is floating in an interstellar space or being fallen freely in a $g$-field.

My question is why many textbooks refrain from explaining the main reason for the locality of EEP? It seems that it is not about tidal forces but rather the $g$-potentials.

I think your worry lies in a misconception

Indeed, even in case of a uniform $g$-field, the observer located on the floor of the freely falling compartment detects that the clock on the ceiling runs faster because it is in a less negative g-potential compared to his own clock.

Recall that Einstein actually found the equivalence principle by thinking of the affect of acceleration on the measurement of time, as revealed in the twin paradox. Based on Einstein's sychronisation procedure, the accelerated twin sees changes to the rate of clocks, as shown here 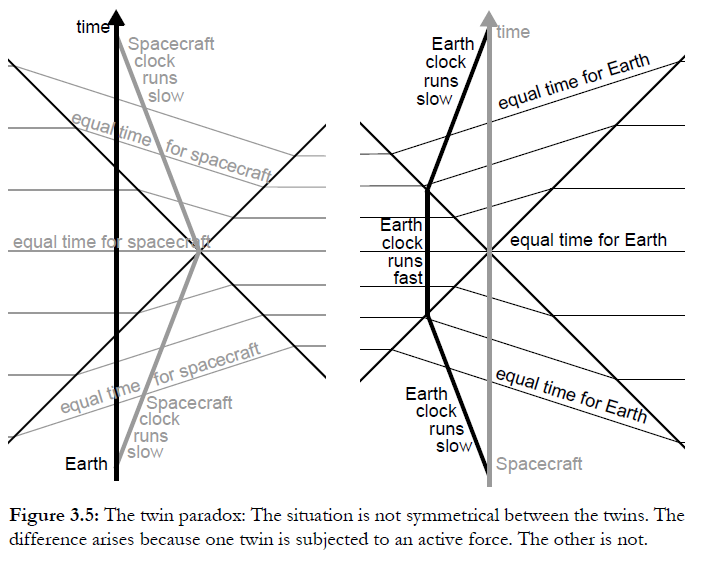 When this is applied to a uniform acceleration, the diagram is 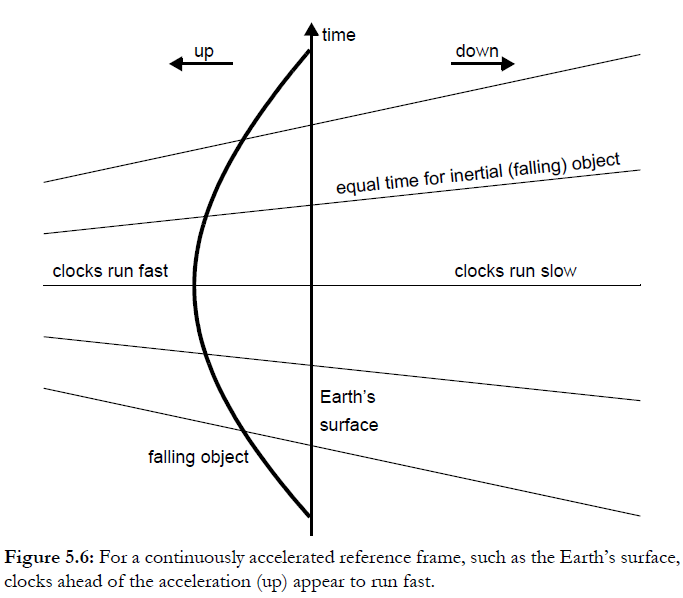 In other words the equivalence principle is telling us that the different rate of clocks due to height in a gravitational field is exactly equivalent to the different rate of clocks in an accelerated frame. For an inertial frame in a uniform gravitational field, the effects exactly cancel out, so that the observer in a freely falling lift will not see any difference in the rate of clocks at floor and ceiling. The point of the equivalence principle is that there is no $g$-potential in an inertial frame. It is indeed the case that tidal forces limit the size of inertial frames. (figures from The Large and the Small)

Well, yeah, that way of stating the EEP has that awkwardness.

Here is another way of stating the EEP:
The motion of a point particle moving under the influence of gravitational interaction is true inertial motion.

At the same time this way of stating the EEP requires that the concept of a global view is granted. In order to track motion you need spatial extent.

Example of tracking motion: measurement of the deflection of light passing by the Sun (Eddington, 1918) In order to get a picture from which the deflection can be inferred the camera taking the picture must be at a sufficient distance from the Sun.

In the case of a planet orbiting a star the conceptual description must be on a scale that encompasses the entire orbit.

If the EEP is stated in terms of 'frame this' and 'frame that' then you are putting yourself under the same burden as the burden on the mathematicians who first introduced differential calculus.

That is why I think in stating the EEP using the concept of frames makes things awkward. Instead I think the EEP is better stated in a form where it is required that all of the conceptual framework of differential calculus is granted.

If there is inertial motion in totally flat vacuum, go to the rest frame and conduct any experiment.

So given interactions (And therefore Measurements) are local, you cannot tell if space is flat or is curved. That's the original ideal.

Not the answer you're looking for? Browse other questions tagged general-relativity equivalence-principle tidal-effect locality or ask your own question.