Influence of geometry of collision on parameters after collision

A ball with with velocity of 10 meter per second initially collides with two other identical balls whose centres are one a line perpendicular to the initial velocity and are in contact with each other. If the ball is aimed at contact point and the surfaces are frictionless. Find velocity of all three balls after collision. 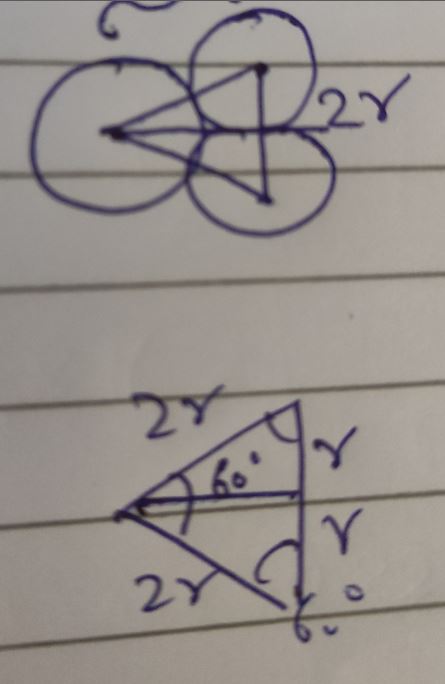 Here we take snapshot of how the system looks right before collision pushes everything away, and, then say that half angle in the triangle connecting the sphere is same angle as velocity components (30 degrees in this case). Why is this? As in, why are the angles in the triangle corresponding to angle between velocity components? Is this provable using mathematical arugements?

Edit: I found a deep discussion of this in wiki

Not the answer you're looking for? Browse other questions tagged momentum conservation-laws vectors collision geometry or ask your own question.

0
How can the bodies attain same velocities during the max. deformation during collision?
1
Understanding elastic collisions of objects with the same velocities
1
Solving 2D Elastic Collisions, unique solution?
0
Collision angle relation to velocity of balls in Billiard Pool Game
0
Collisions in a System of Bodies
0
Question about ball collision in 2D and conservation of momentum & kinetic energy
0
Elastic collision of a ball against a container wall