Does a ceiling fan block air flow from a window or a door?

A ceiling fan creates a vertical circular airflow. Does this airflow along a window or a door in the room reduce the airflow through them? I would guess air trying to flow into the room would face more resistance as the ceiling fan's speed increases.

As an example imagine there's a window along the right-hand side I contour: 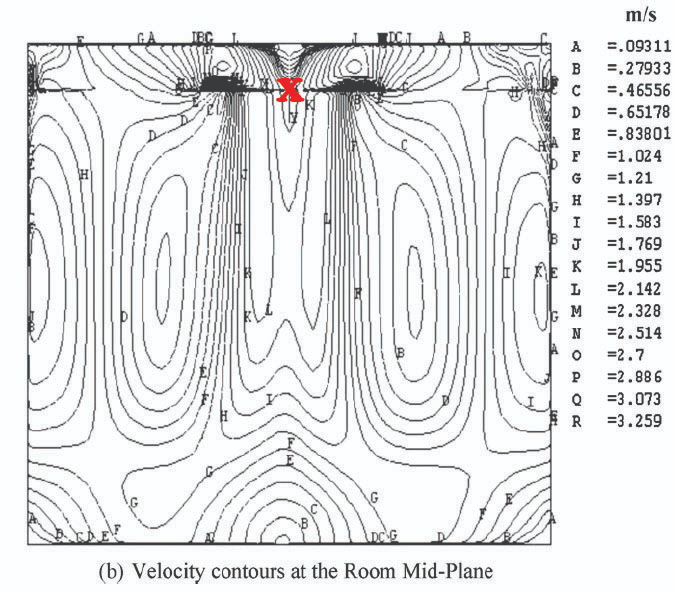 Will having the ceiling fan spinning, reduce the rate of exchange of air between the room and the outside world or the rest of the house?

The question reduces to: "Can a parallel airstream to an open window in a room prevent wind from outside the room from entering the room?"

One can look up:

For typical air at room conditions, the average molecule is moving at about 500 m/s (close to 1000 miles per hour)

Just for information, because these (relative to wind velocities) high velocities (due to the heat content of the air), have nothing to do with this problem.

Let's assume typical air conditions. If there is no airstream parallel to the window (the fan is off) and a wind is blowing towards the open window than the wind can blow freely into the room, making you feel a wind blowing in the room It's the averaged wind velocity that's involved.

If air blown by the fan flows parallel to an open window, then by Bernoulli's equation it should have lower pressure than the stationary air just outside the window. A parcel of that outside air feels normal atmospheric pressure from all sides, except for the window side. So it gets pushed inward, and so air flows into the room.

That's one possibility. But since air is nearly incompressible in typical conditions, the total amount (mass or number of particles) of air in the room should not change. So if air is flowing in through the window, it must be flowing out somewhere else. For example if you have a ventilation duct, it could passively flow out through the duct, while the pressure differential is actively bringing it in through the window.

Basically, if we're assuming an equilibrium laminar flow, then there will be some streamlines moving faster and others moving slower. Wherever there's a gradient of flow speed among adjacent streamlines, the lower speed (higher pressure) ones should gradually be migrating toward the higher speed (lower pressure) ones as you move along the streamline. So the flow turns. But that doesn't have to happen at the window, it could happen anywhere in the room, depending on the boundary conditions (the shape of the room and any openings it has).

So the fan may induce air exchange if your room is set up well. But I don't see any reason it would inhibit exchange. If air is not actively flowing through the window, it's because the air just inside the window is stationary anyway. And in that case, you should get the same rate of exchange that you would without the fan.

0
Does the ceiling fan make the air and dust spiral in?
0
Have I calculated the air flow of this fan correctly?
0
How to calculate air flow from a pressurized tank?
1
Fan vs. Air-conditioning
1
How do "air nozzles" in airplanes concentrate air flow so well?
0
Length of funnel for smooth air flow
3
Why wind stops flowing through a window when the door is closed?
4
What's the best way to orient the bathroom door to optimize fart fan efficiency?