Can multiple Helium-4 nuclei occupy the same place because the nuclei are bosonic?

A quarter of all matter in the observable universe is Helium-4 while all Helium-4 atoms have a nucleus with a zero spin integer which is characterized by Bose–Einstein statistics. Does this mean that Helium-4 nuclei are not subject to the Pauli exclusion principle and likewise multiple Helium-4 nuclei can occupy the same location?

Short answer: no.
There are still electrons and quarks inside atoms, which are fermions, and they obey the Pauli exclusion principle. Quantum degeneracy pressure is indeed what stops the gravitational collapse of most stars (most = apart form those which become black holes).

First of all, the mainstream concept of adding each atomic sub-component's angular momentum quantum number to get a total spin number, and then using that to classify the atom as 'integer' or 'half-integer' and thus obeying Bose-Einstein or Fermi-Dirac (respectively) statistics is a simplification. Which usually works, sure, but still a simplification.

Now, to carry out that permutation operation, you would need to take into account the situation where one quark of $a$ is swapped with one quark of $b$, one electron of $a$ swapped with one electron of $b$ and so forth. However, quarks' tunnelling from one nucleus to the other costs a lot of energy and is therefore not energetically allowed in usual day-to-day energy régimes. Same thing with stripping individual electrons (unless they are already shared in a molecular bond, in which case you'd be taking about gerade and ungerade symmetrical oribtals). So in the end you only consider swapping all the electrons and all the quarks of $a$ with all the electrons and all the quarks of $b$. Which is nothing other than exchanging the position of the two atoms. So, because you have energetically ruled out any sub-atomic permutation operation, you can just treat each atom as independent, and then proceed with "the sum of all the internal spin quantum numbers".

The moral of the story from above is that while you almost always can sum the internal spin quantum numbers to get the atom's total spin, in some cases that may not be useful (e.g. when an electron is shared in a molecular bond, or when you have access to energy scales comparable to nuclear binding energies). In these cases, you would have to revert to the original definition of the spin-statistics theorem, which is just an (anti-)symmetrisation of the wavefunction upon permutation of indices.

On the other hand, a Helium atom is a composite object. Made of fermions, which will indeed experience Pauli repulsion. As long as your energy is lower than what would be needed to probe the internal structure of the atom, then you can consider the actual atom as the foundational building block. This is the same as saying that the spatial extent of the wavefunction of the atom (de Broglie wavelength $\lambda_{\mathrm{dB}} \propto 1/E \propto 1/\sqrt{T}$) is larger than the physical extent of the atom $\sim 1Å$ (or of the nucleus if you want to know about nuclei $\sim 1$ fm). Where $E$ is the energy and $T$ the temperature.

I recommend that you read Ketterle's "Making, probing and understanding Bose-Einstein condensates". In the intro the paper states:

In a simplified picture, atoms in a gas may be regarded as quantum-mechanical wavepackets which have an extent on the order of a thermal de Broglie wavelength $λ_{dB}$ [...]. $λ_{dB}$ can be regarded as the position uncertainty associated with the thermal momentum distribution. The lower the temperature, the longer $λ_{dB}$. When atoms are cooled to the point where $λ_{dB}$ is comparable to the interatomic separation, the atomic wavepackets “overlap” and the indistinguishability of particles becomes important 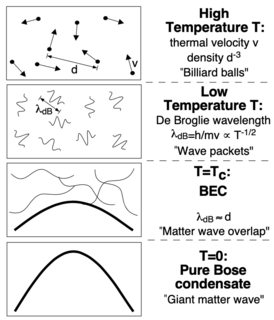 Not the answer you're looking for? Browse other questions tagged nuclear-physics atoms bose-einstein-condensate bosons pauli-exclusion-principle or ask your own question.

6
What prevents bosons from occupying the same location?
5
Spin, statistics and neutron stars
3
Can superfluids pass through ordinary baryonic matter?
1
Quantum numbers and radial probability of the electrons
21
Are protons and neutrons affected by the Pauli Exclusion Principle?
1
Could a cloud of hydrogen-1 or helium-4 turn into Bose–Einstein condensate when the universe reaches maximum entropy?
21
Big Bang and the Pauli Exclusion Principle