What causes fluorescent light bulb to light up when it is near a plasma globe? Can this phenomenon be used to generate electricity in a circuit?

When a fluorescent light bulb is placed near a plasma globe, despite the fact there isn't a closed circuit, a part of the light blulb would light up. 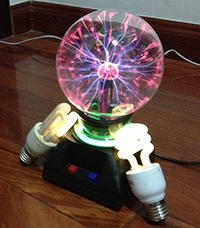 I tried measuring the voltage of the air around it with the probes of a multimeter, and discovered that the shorter the distance between these probes, the lower the voltage the reading shows. And when one of the probes is at a large distance away from the globe, the reading on the multimeter would increase as the other probe gets closer to the globe. The reading can increase up to 300 volts.

What does this imply? Am I conducting a wrong measurement? Does the plasma globe ionized the air around it and the electrons in the ionized air excite the mercury vapor in the light blub and cause the phosphor to fluoresce?

Are all plasmas (cold & hot) kept in glass container capable of ionizing the air around it? If yes, is it possible to generate electricity current that flows in a circuit from this phenomenon? (By this phenomenon I'm talking about the phenomenon that causes the light bulb to light up. I'm not talking about plasma itself where nuclear fusion can take place.)

It's the high-frequency electromagnetic waves coming from the plasma tube that are doing the trick. And yes, you can in principle broadcast power using it, though it would be very wasteful. Still, no less a person than Nikola Tesla, to whom we owe credit for the majority of our modern power infrastructure and radio equipment (some sad stories there), was able to convince the venture capitalists of his era make a large-scale and very serious attempt at what you just suggested in the Wardenclyffe Tower. Alas, it was never completed and was torn down; only the foundations remain.

The effect of an electromagnetic wave on matter depends profoundly on how tightly bound the electrons are in a particular substance. In the case of metals, the conduction electrons are already delocalized and respond strongly to even the faintest whiff of the electric component of an electromagnetic wave, even at low frequencies and amplitudes. That's a good thing, too, since otherwise the whole discipline of radio broadcast and reception would not exist!

On the other extreme are compounds like rubber and most plastics, in which most of the electrons are very tightly bound and do not come lose easily at all. Radio waves have no noticeable effect on those until you reach intensities (e.g. microwave ovens, and even then most plastics are immune) where begin to heat or destroy the material itself.

Humans and other assorted bags of ionic fluids are an odd case. Salt water does conduct, but most of the conduction takes place via large and heavy ions, rather than super light electrons. So, radio waves do affect us, but the ions move so little in most cases that there's no real signal above background heat vibrations. In contrast to plastics, however, this mechanism makes us very much susceptible to microwave oven levels of radio waves, which are powerful enough to cause strong heating via those vibrations.

Fluorescent compounds are another curious case, but in a quite different ways. They are mostly akin to plastics in that the majority of their electrons are very tightly bound.

However, in a rough analogy to semiconductors, fluorescent compounds have a subset of electrons that are just loose enough to go sailing from certain charge centers if they are moderately provoked to do so. It takes a lot more energy than the trivial amount needed for metals, but also a lot less than the damaging energies of a microwave oven. A wave of the right frequency can repeatedly bump these electrons along, a bit like someone pushing a swing, until they can fully leave the charge center from which they originated.

Now, since these materials are more like plastics than metals, that presents a bit of a problem for the electrons, since they have no trivial path "just follow the charge gradient!" path back to the charge center, as would happen in a metal. So they can get a bit lost, for times that extend from microseconds up through minutes and even hours, maintaining substantial energy very much as though they were tiny one-electron capacitors in a broad, slightly positive background with lots of barriers in their way.

Eventually, however, they find a way back to one of the charge centers and fall into it with a bit of a thunk, recombining with a specific atom or molecule and releasing at that moment the sum of the energy they acquired during their outbound trek across the material. It's a bit like carrying a bowling ball up a gradual slope, then randomly finding a cliff edge to drop it back to the original level. None of your individual footsteps are powerful enough to drop the ball that hard, but cumulatively, they can add enough energy to create quite a bang if it is all released at once.

(I should note here for completeness that in other forms of fluorescence, such as a white shirt glowing under a black light, don't bother with any of this slow-climb business. An ultraviolet photon is more like a cannon that blasts the cannonball straight up to the top of the cliff and beyond, where it then falls back with some overall loss of energy.)

So, what is happening with your fluorescent bulbs in the vicinity of that plasma sphere is that the high-frequency electromagnetic waves are just strong enough to free some of the weekly held electrons from the charge centers and start them wandering around their mostly-insulating surroundings, accumulating enough total energy to give off a visible photon as they do so. The pigments in fluorescent lights are specifically chosen to allow fairly easy recombination, e.g. within a few milliseconds. However, even those materials retain a certain percentage of electrons that manage to get totally hosed and not find their ways back to positive charge centers for several minutes. It's easy to demonstrate: Go into a closet with with a fluorescent and let your eyes get used to the dark. Next, cover your eyes very well and turn on the light, just for a second or two. Turn off the light and look at it. You will see it still glowing, fading rapidly. That's due to the wandering electrons finding their ways back with a certain half-life. The effect can go on for some time, fading but never quite disappearing.

A couple of things about florescence first: Florescence is a quantum phenomenon that works something like this. The florescent atom absorbs high energy photons, usually UV from a discharge, and an electron makes a transition from the state $n_1$ (usually the ground state) that has energy $E_1$ to a higher metastable state $n_3$ with energy $E_3$. Immediately below the state $E_3$ there is a level $n_2$ with energy $E_2<E_3$, such that $\Delta E=E_3-E_2$ corresponds to visible light. So the electron will make a transition to the state $n_2$ emitting visible light. It is this visible light that illuminates the room. The next transition $n_2\rightarrow n_1$ may still correspond to UV, or visible light of still high energy (frequency). So you have this picture of electronic transitions:

When the “florescent” atoms in the light bulb absorb the appropriate energy photons from the globe, which need to be high frequency because the metastable states lie a bit higher up from the ground state, the atoms in the florescent substance will do what is described above.

No electric current is needed to make the florescent bulbs work since they are illuminated by the HF photons fronm the plasma globe.

2
Can a camera flash light near high voltage wires create medium to pass electricity?
18
Can the Earth's magnetic field be used to generate electricity?
0
Would an ordinary or fluorescent lightbulb generate electricity when exposed to light?
6
What causes the buzzing sound when the electricity changes into heat?
0
List of questions about charge, voltage, and capacitance
2
Best/Most crafty ways to enhance spectrometer data from a mini-plasma generator?
3
Since water boils at room temperature in a near vacuum, is it possible to use this to generate electricity in some way?