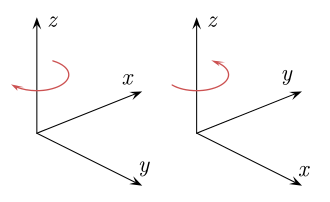 I am tasked with (what I thought was) a rather easy question: 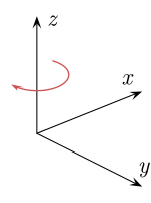 The correct answer is that the magnetic field is in the $-\hat{\boldsymbol{x}}$ direction. I am confused for 2 reasons:

The order in which you are referring to your fingers is incorrect. For a vector equality of the form $\textbf{C} = \textbf A \times \textbf B$, the thumb of your right hand is supposed to represent the direction of the quantity on the left-hand-side: that is, $\textbf{C}$. The index finger then represents $\textbf{A}$, while the middle finger, $\textbf{B}$.

Not the answer you're looking for? Browse other questions tagged homework-and-exercises electromagnetism electromagnetic-radiation magnetic-fields conventions or ask your own question.

3
What is the direction of an accelerated particle due to a variation of magnetic field?
0
Am I wrong about the right hand grip rule?
5
Definition of vector cross product
0
A question about the magnetic field and magnetic poles of a solenoid
0
Cross product and handeness
1
Direction of $B$-field from right hand rule for electromagnetic wave
0
Magnetic Field Direction in Solenoid