I'm having some problems understanding how if a moving object emits light, the speed of that light is still the constant, $c$, speed of light. According to Einstein's theory of relativity, light travels at the same speed for all inertial frames of reference. From what I understand if a driver driving a car at a constant velocity with headlights on sees the light, it would be travelling at $c$, and an observer on the side of the road would also see the light as speed $c$.

At school we have learned about time dilation and length contraction, however, I do not see how they could be applied in this situation to explain why the light "slows down".

I would appreciate it if your answers could try to remain with a knowledge level of a high schooler.

I have also looked at other threads on this exchange, but either I do not understand them or they don't answer the question I have.

At school we have learn about time dilation and length contraction however I do not see how they could be applied in this situation to explain why the light "slows down".

Instead, if you are having trouble with the invariance of the speed of light, you might prefer an approach that does not use it. It turns out that, if you use only the principle of relativity, you can prove that there are two possibilities. Either there is no finite invariant speed, in which case you get Galilean relativity, or there is a finite invariant speed, in which case you get special relativity. Then it becomes a simple matter of experimentally testing to see which of the two possibilities corresponds to reality.

Then a light pulse in the unprimed frame is given by

So the speed of the light pulse is c in the primed frame also. The speed of light is therefore invariant.

The second postulate of Special Relativity states that "The speed of light in vacuum, c, is a constant, independent of the relative motion of the source". The phenomenons of length contraction and time dilation are consequences of this postulate, so is the postulate of constancy of $c$ that explains these phenomenons, not the opposite. There are two motivations for this postulate, one experimental and one theoretical.

The experimental evidence for constancy of $c$ comes from the famous Mihchelson- Morley experiment, as you can check here: https://en.wikipedia.org/wiki/Michelson–Morley_experiment.

The theoretical motivation comes from the Maxwell wave equation, which was the motivation used by Einstein to write his first article on relativity published in 1905, whose title is "On the Electrodynamics of Moving Bodies". You can check more about these topics here

Yes this is a common confusion among "high schoolers" and not only and initially seems as a paradox from our everyday experience with relative moving objects. The problem goes away if you understand that light is not an object but a wave.

To answer with a paradigm as simply as I can, lets consider the following question and scenario which covers what you actually ask:

In what scenario can you subtract the speeds of a moving light source towards an opposite moving observer towards the light?

According to special relativity c(fixed)=λf=λ/Τ where c is the propagation fixed speed of light in vacuum space, λ the wavelength of light (i.e. distance between two waves) and f the frequency of light (i.e. how many waves per second, color for visible light) with f=1/T where T is the period of time between two light waves, there is no relative speed of light for an observer and the propagation speed of light is absolute, meaning has the same value approximately 3E8 m/s for all observers independent their velocity (i.e. speed and relative direction to a light source).

That what is changing however in the above scenario also deduced from the above formula is, that as you move with a finite speed v towards the light waves you get (T-t) which is equivalent with you seeing shorter wavelength of light thus higher frequency of light. Therefore in the above formula in order to keep c speed always at a fixed value of 3E8m/s the speed of light, if the f=1/(T-t) value goes up because your travelling with a speed v inside the light wave and towards the light source (see figure) then λ value in the equation must go proportionally down so that c speed of light has always the same fixed speed thus 3E8=300,000 Km/s.

Nevertheless, there is a loophole on the above arguments which I believe is related to your question and will resolve all your confusion. That in order the above to be true we assume that the light from the light source has already reached you and you can see all this time the light? Thus, you are inside the light waves all this time you are moving. That is the tricky part I believe you are asking and the source of the confusion.

So, is there a scenario where you are allowed to do c-v or c+v for calculating a relative propagation speed of light according to your motion? Yes of course. You are allowed to do that only in the case you have NOT seen yet the light from a light source which was turned on because its light has not reached you yet but it is on its way towards you moving then you are allowed to do any algebraic addition or subtraction depending your relative velocity to calculate the time needed for the light to reach your position in space!! Thus in case you are speeding up towards the coming light is effectively increasing the speed of light you can say to c+v in a vacuum with v being your speed. But if you are already inside the light waves, the speed of light independent of your frame of reference and velocity is always at c=300,000 Km/s. In that case the only thing your motion affects the light is its color thus its frequency. 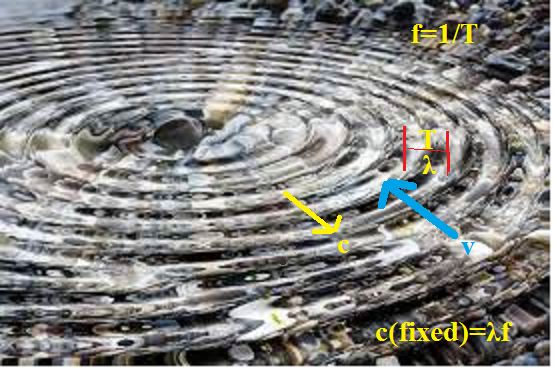 "Moreover, if light consists of particles, as Einstein had suggested in his paper submitted just thirteen weeks before this one, the second principle seems absurd: A stone thrown from a speeding train can do far more damage than one thrown from a train at rest; the speed of the particle is not independent of the motion of the object emitting it. And if we take light to consist of particles and assume that these particles obey Newton's laws, they will conform to Newtonian relativity and thus automatically account for the null result of the Michelson-Morley experiment without recourse to contracting lengths, local time, or Lorentz transformations. Yet, as we have seen, Einstein resisted the temptation to account for the null result in terms of particles of light and simple, familiar Newtonian ideas, and introduced as his second postulate something that was more or less obvious when thought of in terms of waves in an ether." Banesh Hoffmann, Relativity and Its Roots, p.92 https://www.amazon.com/Relativity-Its-Roots-Banesh-Hoffmann/dp/0486406768

Even Wikipedia, surprisingly, tells the truth about the Michelson-Morley experiment and the speed of light:

"Emission theory, also called emitter theory or ballistic theory of light, was a competing theory for the special theory of relativity, explaining the results of the Michelson–Morley experiment of 1887. [...] The name most often associated with emission theory is Isaac Newton. In his corpuscular theory Newton visualized light "corpuscles" being thrown off from hot bodies at a nominal speed of c with respect to the emitting object, and obeying the usual laws of Newtonian mechanics, and we then expect light to be moving towards us with a speed that is offset by the speed of the distant emitter (c ± v)." https://en.wikipedia.org/wiki/Emission_theory

Not the answer you're looking for? Browse other questions tagged special-relativity speed-of-light inertial-frames time-dilation or ask your own question.

0
If I'm travelling at high speed in a spaceship, switch the light off and open the shutters, do I notice a difference?
0
Time dilation moving with the speed of light
10
Why does speed of light have to be constant?
1
Can length contraction actually be seen in the real world? Light from different parts of an object will reach an observer at different times