What is difference between fast neutrons and thermal neutrons?

Recently i was reading about neutron absorption by metals. But there are always two different categorizes for thermal neutrons and fast neutrons. I don't understand what difference between them!

These terms have to do with the energy of neutrons: thermal neutrons, as their name suggests, have the energy of the order $k_BT$, whereas fast neutrons have much higher energies. You may check here for an even finer classification.

Both types of neutrons can be used in nuclear reactions: fast and thermal.

Neutrons carry a certain energy, just like every other object in the universe carries energy. Your body might also have more energy during the day than in the evenings.

And so is the neutron losing energy over time with every interaction (except for cold or ultra-cold neutrons in a hotter environment). Due to their neutral electrical charge, it is almost impossible to accelerate them again. I am attaching here a cosmic-ray neutron spectrum edited from this paper: 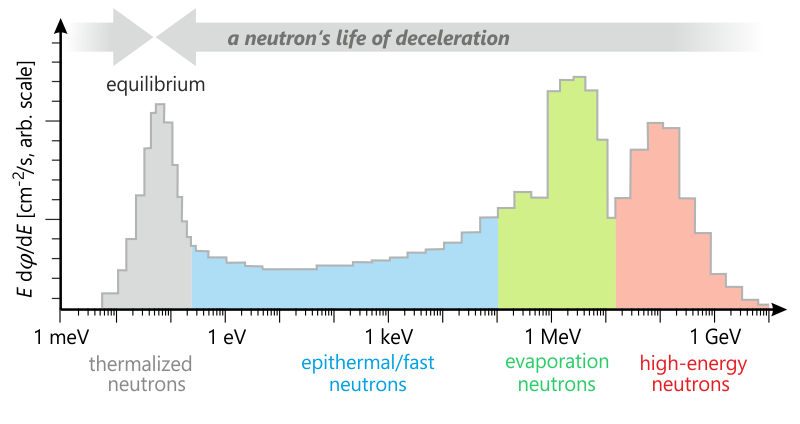 The plot shows how incoming high-energy neutrons lose energy from interactions with atoms (e.g. in the atmosphere and ground) while they turn to classes like fast and epithermal neutrons, just until they got thermalized. Here they have so low energy that it equals the thermal energy of the surrounding material. In this thermal domain, the ping-pong interactions with surrounding particles keeps their mean energy roughly constant. Note that "thermal" on Earth means something else than in space, as @Vadim pointed out the relationship to temperature.

Funny thing is, the likelihood of neutron interaction with atoms (called "cross section") highly depends on the neutron energy. In this plot (also from that paper) you can see that thermal neutrons are much more likely to interact with, e.g., hydrogen H, than high-energy neutrons.

You can look up those cross sections at ENDF. Note that they are different for different interaction processes, e.g., scattering or absorption, but this is another story.

Not the answer you're looking for? Browse other questions tagged neutrons or ask your own question.

0
Thermal or fast neutrons are used for adding neutrons to atomic nuclei?

6
What are the strongest sources of collimated neutrons and protons?
2
Evidence for standard model description of neutrons
0
Questions about specific behavior of fission daughter products
1
What feature of the Beryllium nucleus makes it such a good source of neutrons when hit with alpha radiation
1
Why fast neutrons for breeder reactor but slow neutrons for regular light water reactor?
0
What is the maximum density that Ultra Cold Free Neutrons can be confined in defined container and conditions for this purpose?
3
Has a nuclear "neutron halo" been measured directly? Anything other than "breaks easily"?
1
In discussions of nuclear radiation, why comparitively scant mention of neutron radiation?