What is the cause of the reduction in peak microscopic cross section with increasing temperature, shown here for a nuclear resonance? 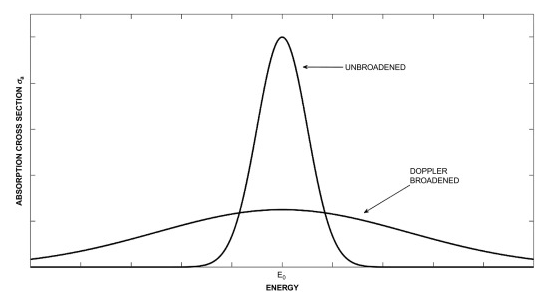 The nuclear properties of the target material do not actually change with motion, so why does the peak reduction of the target's microscopic cross section ("effective area") suggest that they do? I understand the need to broaden with respect to relative energy of neutron-target, but not to simultaneously reduce the absolute values of the curve itself.

Taking it to an extreme like T-->infinity, I can see that if Doppler broadening were forced to be anchored to the peak, and the curve were merely expanded outward in energy, then the neutron would be considered always to be within the resonance - and, in fact, at the peak energy - which is the opposite of what is intended. Still, when considering just one neutron at a time - say, in a Monte Carlo simulation - if the target's motion is sampled independently from a temperature dependent distribution (e.g. Maxwellian) it would seem appropriate to use zero Kelvin cross sections. Is this true?

This is distinct from when we perform a calculation - perhaps deterministic transport, or Monte Carlo without determining the target speed by sampling from a distribution - in the laboratory frame of reference, where the projectile (neutron) has a fixed speed, but the target has a distribution of speeds (e.g. Maxwellian). In this case, we have to average the cross section weighted by the relative speed (energy) distribution surrounding the projectile energy. This averaging reduces the peak, and it also explains why the reaction rate is preserved per neutron (area under curve).

11
What is the minimum amount of fissile mass required to acheive criticality?
12
Does neutron radiation form clouds?
4
Why is the total interaction cross section larger for incident particles with lower energy?
1
Intensive radiative heat transfer in very hot gas ( >5000K, gas core nuclear reactor related )
4
Why are neutron absorption cross sections high at low incident energy?
5
Gamow peak and nuclear reaction rate
3
Has a nuclear "neutron halo" been measured directly? Anything other than "breaks easily"?
1
References about "neutronic" algorithms
0
Does the Doppler broadening in nuclear physics also change the interaction type of the particles involved?