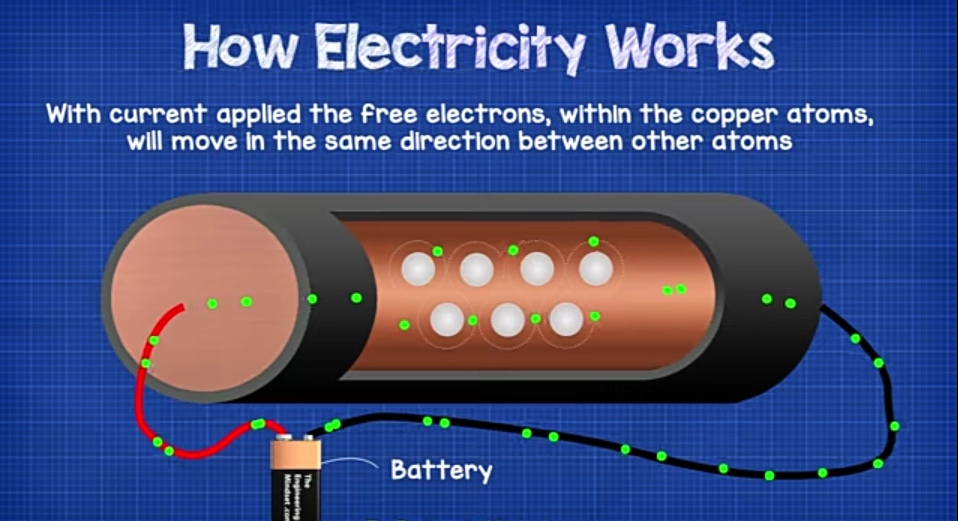 ! When I see pictures like this and when my teacher explained to me how electrons flow inside a wire I imagined electrons to be moving inside the conductor where there are the atoms or jumping on the inner surface of it not in the empty space in the wire

Which lead me to thinking that they're actually moving in the emptiness and the resistance is made when the electrons there bump into the atoms of the inner surface of the wire (the only way I could convince myself of the fact that the more emptiness there is the more they're free to move and less the resistance) However each time I see a video about how electrons move there are always atoms and the thing is the conductor atoms can't exist in the emptiness!

Note: please don't answer using high level physics I've seen a couple of answers about the movement of electrons but they either explain it in complicated words or they make it very simple by comparing them with other objects which wasn't good for me because I started making wrong assumption based on the characteristics of the object used in comparison. I want to imagine it right.

To give you a little flavor of what the “high level” physics says, start by abandoning your notion of electrons as little balls of charge. Solid state physics (the relevant discipline) tells us that the electrons responsible for conductivity in a metal are delocalized. They are entities which are spread out over some large number of atoms. Moreover, they are waves with particular properties based on the positions of the atoms in the metal crystal. Thus, you might imagine the electrons as extended waves rippling amongst the atoms.

Now, there are many electrons in a metal, each going in a slightly different direction with a slightly different energy. In a wire with no applied electric field, the electrons are going in every which way such that the total current is zero. When there is an applied electric field, the whole population of electrons gets biased in the field’s direction such that there are slightly more electrons moving that way than the opposite way, and you get a net current.

This answer is inadequate. It glosses over a lot. But perhaps this helps you visualize things a little differently.

In the beggining of electricity, it was sometimes treated as a kind of fluid.

When Millikan found that there is a minimum electric charge, that it can not be divided infinitely, as our idea of a fluid suggest, the intuition changes to little solid balls. But intuition is always a comparison, and that way misleading.

Unless we study solid state physics (what requires quantum mechanics), and the differences between conductors, semi-conductors and isolants based on its band structures, maybe the fluid analogy is better than the solid balls one for most of the electricity effects.

Maybe this classical approximation will help: 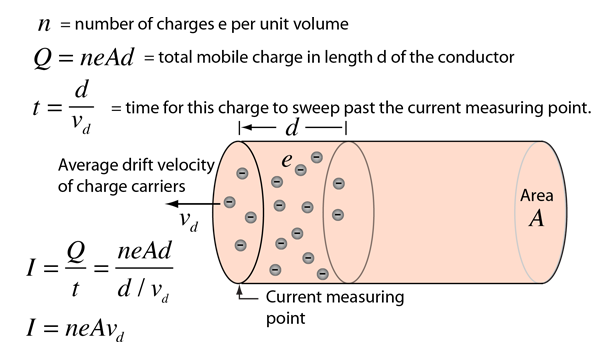 So the charge carriers are in the volume of the wire.

Now for resistance , this makes the analogy with the flow of water in a hose:

How should resistance depend on length and area of a wire?

A “frictiony” (rough on the inside) hose should carry less water than a smooth hose. Let's call“rho” the friction coefficient.Now put it all together.A long hose passes less water at a certain pressure than a short hose:

Not the answer you're looking for? Browse other questions tagged electrons electric-current electrical-resistance or ask your own question.

1
Why does the axle need to be rotated in a turbine generator?
4
Why does not a battery kept in empty space discharge on its own? If space between the terminals is empty, what prevents the electrons to flow?
5
Why resistivity of copper wire is not zero even at zero kelvin?
0
Impact of +ive terminal of the battery on the wire (Conductor)
3
Which types of collisions contribute to electrical resistivity?
1
Divergence of current density and electric field within a wire