Does the object move when the forces are balanced but is rotating? 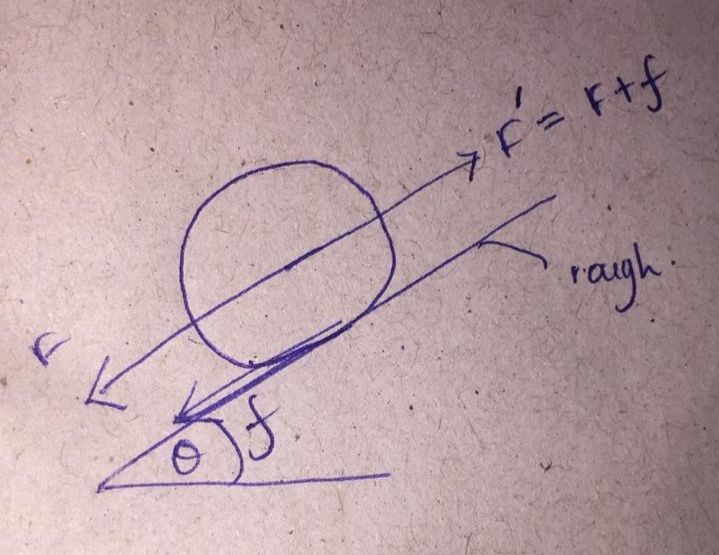 If we apply $F=ma$, there is no net force and as such there is no acceleration in the center of mass. But due to the friction acting, there is a torque which gives rise to an angular acceleration of the object ($τ=Iα$) and as a result you can find a tangential acceleration on the object. How come the same object has two different accelerations? Is there something I've missed or done wrong? Please explain how the object would move or not move.

Based on your free body diagram, yes, the center of mass would not experience any acceleration, but the object would rotate about the center due to the torque from force $f$.

However, based on what you have drawn, perhaps you have misunderstood how the forces are at work here. It looks like to me that you have a ball, (or disk, etc.) that is on an incline. Perhaps there is some string attached to its center to prevent the ball from rolling down the incline. Therefore, it looks like to me that $F$ is the component of the ball's weight along the incline, $f$ is a frictional force, and $F'$ is the tension in the string.

Now, if this is the right scenario, then in your case $f$ would actually be $0$. $F'$ would exactly balance out $F$, and there would be no acceleration and no rotation. Remember, static friction only opposes relative motion. If the string is holding the ball in place, then there is no impending relative motion, so $f=0$.

Of course I could be wrong. Maybe $f$ is static friction, but the incline has a conveyor belt on it so that $f\neq0$. Or maybe there is come other mechanism that is actually pulling on the ball on the incline.

Not the answer you're looking for? Browse other questions tagged forces classical-mechanics rotational-dynamics rotation angular-velocity or ask your own question.

2
Which force makes the contact point of an object in rolling motion rise?

5
Forces and torques about the CENTER OF MASS of a physical pendulum
0
Is this a correct understanding of circular motion?
2
Sign of torque when rolling an object down an incline
0
Need help understanding angular acceleration due to gravity
0
Why does ground contact change whether or not an object will rotate/move
1
How does a box move when an instant force at location is applied?
2
What is the exact role of friction in rolling without slipping?