What was the motivation for thinking the weak interaction could be described by a Yang-Mills theory?

In some sense, describing the strong force using an $SU(3)$ Yang-Mills theory makes perfect sense: Yang-Mills theories describe massless bosons, of which the gluon is clearly a member, while the two most common hadrons were observed (in deep inelastic scattering) to consist of three components, motivating an $SU(3)$ symmetry for the associated interaction. What confuses me is why the weak force would be thought to be described by such a theory, given that it's governed by massive bosons. Clearly, if one wants to unify electromagnetism and the weak interaction, a gauge theory of some sort is needed, and we can of course describe how a massive boson could arise due to spontaneous symmetry breaking from such a theory. But unless one was specifically trying to unify these two interactions, is there a specific reason a Yang-Mills theory would be attempted? (And if the answer is that the Yang-Mills formulation arose from an attempted unification—what was the motivation for suspecting the weak and electromagnetic forces could be unified, rather than any other two?)

Put more simply, my question is this: Electromagnetism and the strong interaction are both mediated by massless particles, which require a gauge-invariant interaction term (and therefore require the fermions to have a symmetry under some Lie group). Massive particles don't require gauge-invariant interaction terms (since they don't undergo gauge transformations) and therefore don't need to couple to fermions with such a symmetry. So is there any good reason for thinking that massive bosons also are governed by a gauge theory, despite not having a gauge in the traditional sense?

What you are asking is "why the discovery by experiments of particle interactions happened the way they happened", a history of interactions.

The electromagnetic interaction had a complete formulation with Maxwell's equation, but it broke down not explaining: spectrums of atoms, black body radiation and the photoelectric effect. Quantum mechanics was invented to fit this data, to start with.

Then the cosmic ray, to start with, and then accelerator data found the zoo of resonances at present found in the pdg.

To start with, the success of QED and the Feynman diagrams used for specific calculations led to describe the data with Regge theory , (a string model that is having a revival of interest now with string theories). It worked well for the strong interaction resonances appearing in accelerator experiments. Next, came the four fermi interaction, the vector dominance model, theorists were working hard to fit the data.

And then came the quark model in the data displaying spectacular symmetries , SU(3) symmetries , the eightfold way.. 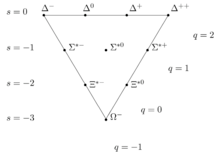 Note this SU(3) is not fundamental it is an emergent one from the basic inetractons of quarks.

The eightfold way may be understood in modern terms as a consequence of flavor symmetries between various kinds of quarks. Since the strong nuclear force affects quarks the same way regardless of their flavor, replacing one flavor of quark with another in a hadron should not alter its mass very much, provided the respective quark masses are smaller than the strong interaction scale—which holds for the three light quarks. Mathematically, this replacement may be described by elements of the SU(3) group. The octets and other hadron arrangements are representations of this group.

Presently the fundamental symmetry for weak interactions is SU(2)

This focusing on group structures made theorists start looking for fundamental group theories to unify weak and electromagnetic, and led to the SU(3) for strong interactions.

So it is the serendipity in time evolution of data and theoretical research that lead to the existing SU(3)xSU(2)xU(1) present theory, not sitting down and thinking "how to use gauge groups".

19
What is a "free" non-Abelian Yang-Mill's theory?
5
What is the relation between interaction range and the mass of gauge bosons?
1
What happens to the Weak Interaction after Electroweak Symmetry Breaking?
16
Is there an argument for using the $\theta$-vacuum for a Yang-Mills theory that works regardless of the presence of fermions?
5
Motivation for classical Yang-Mills theories
3
Is direct observation of strong and weak force ruled out by quantum field theory?
0
What is the Mathematical description of Weak Interaction at low energies?
3
Theory of weak interactions