What happens to $SO(3)$ Lie group if I have angle defect?

$SO(3)$ group is defined as linear transformations that preserve euclidean norm. Now if I identify $\phi$ (angle in $xy$ plane whose axis of rotation is $z$-axis) $0$ to $2\pi\beta$ where $\beta$ can vary from $0$ to $1$. What happens to our spherical symmetry? Will $SO(3)$ group still preserve the euclidean norm?

According to me as soon as I picked the $xy$ plane ($z$-axis of rotation) the spherical symmetry is broken symmetry due to both polar angle as well as azimuthal angle is lost. Is my reasoning right?

Edit: My terminology might be non-standard so what I meant by angle defect(or deficit) is $2\pi(1-\beta)$ 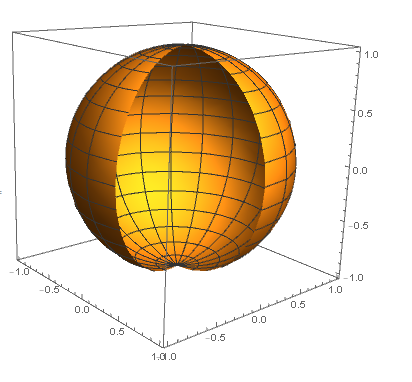 I reckon that there is a gap in your argument. The Killing vectors of S² are correct, but two questions:

Summarizing, I believe that the problem is how you applied the Killing vectors to study your manifold. I would guess that changing to the correct Killing vectors, you would find that the relations change near the missing slice.

Not the answer you're looking for? Browse other questions tagged symmetry group-theory representation-theory rotation or ask your own question.

3
Killing vectors for $\rm SO(3)$ (rotational) symmetry
5
What are the generators of spherical symmetry?
3
How to construct generators and Lie Algebra for Lorentz group?
0
What is the tangent vector representing rotation?
4
Induced representation in Zee's Group Theory
2
Spherical coordinates and rotations of axes
3
Representing a rotation around an arbitrary axis using Wigner $D$-matrix