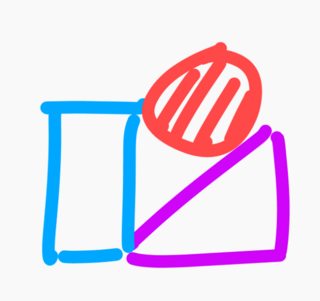 Is the force normal to the pink plane exerted by the red load smaller than that of the case where the load doesn't make contact with the blue block (assuming the load can somehow stick to the plane)? I just wonder how it'd affect the reading on a scale if it was positioned on the pink plane. My take is that the normal force would be the same (thus, the scale readings as well) regardless of the blue block because, since the force exerted normal to the plane is $m \times g \times cos(\theta)$, $m$, $g$ and $\theta$ are variables independent of the blue block. Is that correct?

On the axis perpendicular to the plane you now have $N-mg \cos \theta-F\sin \theta=0$, which changes $N$.

I assumed F is horizontal, but it might not be depending on the configuration. But as far as there is a horizontal component then N will increase

Yes, that's correct. But if blue block and the red mass are in contact and now the red mass is stationary there is a force supplied by the blue block on the red mass. That must be considered as well that force is probably horizontal so it has a component that is perpendicular to the plane. This force will add to the normal force on the plane on the red block. This will, as @Wolphramjonny stated, in his comment, increase the weight shown on the scale.

Not the answer you're looking for? Browse other questions tagged newtonian-mechanics forces newtonian-gravity free-body-diagram weight or ask your own question.