Why does an energy band crossing the Fermi energy mean the gap closes?

This online course on topology in condensed matter states the following:

We say that two gapped quantum systems are topologically equivalent if their Hamiltonians can be continuously deformed into each other without ever closing the energy gap.

This deformation of a Hamiltonian $H$ into $H'$ is given by 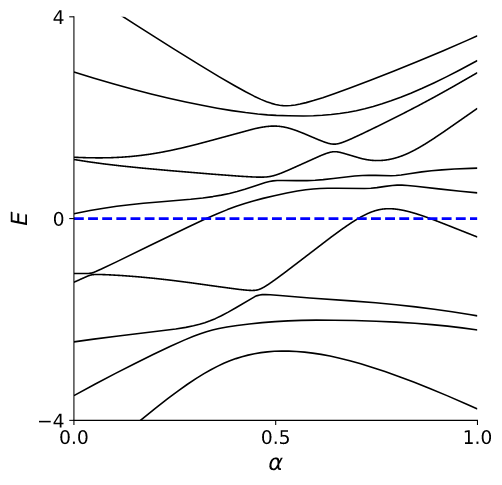 It is stated that when an energy level crosses zero, the gap closes. I do not understand why. My interpretation of the gap is the difference in energy between the highest occupied energy level and the lowest unoccoupied energy level, sometimes called the band gap. I would assume the gap would close if these two levels touched at some point, but in the diagram above this does not happen---there is always a band gap between these energy levels.

I think the confusion here arises from the fact that people say "band gap" to refer to a very specific band gap. As you correctly noticed, the gaps between the different bands have not disappeared as we varied $\alpha$ and they shouldn't.

Not the answer you're looking for? Browse other questions tagged condensed-matter many-body electronic-band-theory topological-insulators topological-phase or ask your own question.

1
Sold-State Band Structure - connection between Fermi Energy, Fermi Level and Work Fuction
22
What does Fermi level in the band gap mean?
5
Confusion between band structure and energy gap of conventional superconductor
1
Is there an upper limit on the band-gap of insulators?
0
Band gap vs QM energy level gap between electron orbitals
4
What is the cause of formation of indirect band gap in semiconductors?
5
What does it mean if the Fermi level crosses into the valence band? How about into the conduction band?