At the melting and vaporising stages, it is said that the temperature does not rise because the energy is used to break the bonds rather than increase the temperature.

Why is this the case?

Why can't energy be used to do both?

I would have thought that energy expenditure is somewhat random, so I am not really comprehending why energy is all going to the bond breaking process. 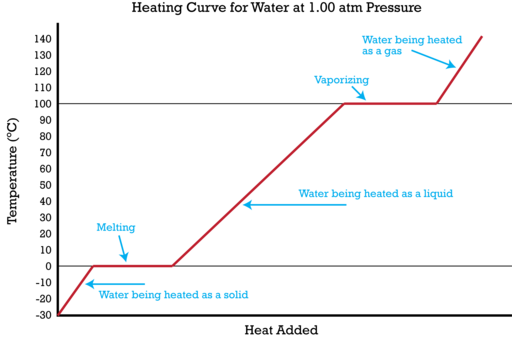 it is said that the temperature does not rise because the energy is used to break the bonds rather than increase the temperature. Why is this the case? Why can't energy be used to do both?

Energy can do both, but not necessarily at at the same time.

In your graph, where the water is being heated as as a liquid and where the water is heated as a gas, the heat transfer is causing an increase in the translational kinetic energy of the molecules and atoms, i.e. an increase in temperature. But it is not at this point a sufficient amount of energy to increase the separation of the molecules and atoms (increasing microscopic potential energy).

But when the phase changes occur (solid to liquid and liquid to gas) the heat transfer to the substance is increasing the separation of the molecules and atoms causing an increase in microscopic potential energy. At this time it is not causing an increase in the microscopic kinetic energy (increasing temperature). So the temperature does not change.

10
Melting point, is it determined only experimentally?
13
The difference between heat and temperature
3
Resonance in Benzene violating Second Law of Thermodynamics
1
Which requires less energy, complete mechanical breaking or vaporization of matter?
0
Is there a melting analogy for evaporative cooling
0
Why does steam condensing release energy?
1
Does a crushed ice cube and a regular ice cube have different potential energies?
1
Thermodynamics - do all particles in a system undergo a state transition at exactly the same time?
0
Why doesn't phase transition occur at temperatures different from melting and boiling points?
22
Why, exactly, does temperature remain constant during a change in state of matter?